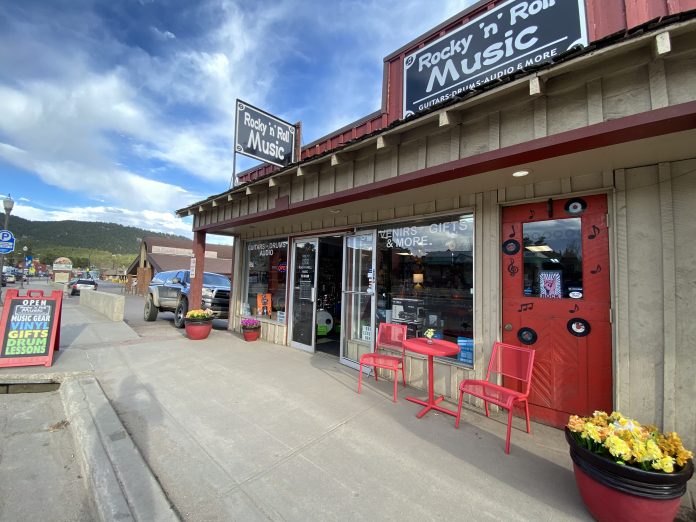 During the last two years, the local retail industry has taken a major hit.

Not only did operators have to survive the  shutdowns of the pandemic era and try to stay afloat like other businesses, but they were forced to compete with major online retailers.

Despite these struggles, Woodland Park remains to be a prime hub for unique retail outlets. One local store, Rocky ‘n’ Roll Music, located in the city’s downtown region, is still striving but they had to add services to their business model to remain in operation.

According to the store’s owner, Hector Herrera, business was great when the store opened in 2018. But (like most businesses) the good times abruptly came to a halt in the spring of 2020. “When COVID hit, we had to quarantine and shut the shop down for a month and a half,” Herrera said. “When we all got out of quarantine at the same time, people had money in their pockets because they had all received stimulus checks. People realized they needed to have a hobby in case it happens again. So, when everybody got out of quarantine we had a huge spike in guitar sales, we couldn’t keep them on the wall. But, that only lasted so long.”

He said that sales started to drop a few months after the pandemic, most likely due to the fact that more people learned how to shop from home. Then, he said that tourism has declined in the city this year, which has hurt his business even more.

To keep up with the changing times, he and his wife have had to change their business model and offer more than just retail sales. In addition to their slew of products, Rocky ‘n’ Roll Music now offers drum lessons and karaoke/trivia hosting services.  In addition, Hector plays in a local band.

Hector and his wife Shannon have worked their entire lives in music stores, and they spent several years in the Dallas/Ft. Worth, TX area. Hector originally grew up in Mexico, and he and his wife had always dreamed of living in a Colorado mountain town.

In 2015, Hector’s job relocated him to Denver, and ever since then, the Herreras were searching for a home in an area mountain town. They eventually relocated to Green Mountain Falls, and decided to open up a music store in Woodland Park since there was a music scene in the city, but no music store. 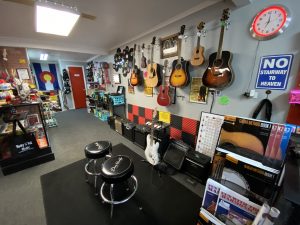 The husband and wife team then went to other mountain towns and modeled their store after other retail locations they visited first-hand. The store first opened selling merchandise geared to musicians and gifts for just about everyone. 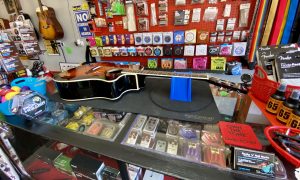 The store also offers drum set lessons and they have more than 30 active students. Hector and Shannon also spend many of their nights hosting karaoke and trivia events at various bars in the area.

And then about a year and a half ago, Hererra decided to start a band with two other local musicians, called the Electric Blues Trio. The band now books several gigs regularly and plays in venues all across Teller County.

The band members all met through the store, and now they have become well-known in the region. “We play all kinds of music, but we are mostly a blues band,” Herrera said. “We do Chicago blues, Memphis blues, Kentucky blues, swampy blues, and then we do classic rock as well because people like to hear bands like Tom Petty, the Rolling Stones, the Beatles, and that type of stuff.”