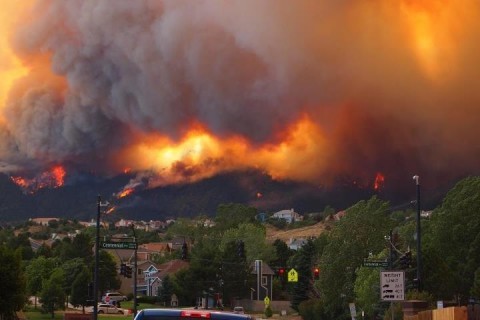 Despite concerns from some area residents, with memories of the High Park blaze lingering, elected leaders in Teller County last week officially placed the area back into a more traditional Stage 1 fie ban.

This less restrictive code permits outdoor smoking and grilling, and is the more standard fire ban residents in Teller have faced virtually every summer. Similar measures were endorsed last week by the city of Cripple Creek and other municipalities.

In mid-May, and just hours before the biggest wildfire of the season struck, the county was placed on a very restrictive Stage 2 ban, one step shy of shutting the region down for recreational use.

However, an unprecedented snow storm that dumped 30  inches of snow in some parts of the high country in late May, offered much relief. Plus, the area experienced more favorable moisture conditions.

Even with this move, elected leaders and government officials warned  residents and visitors that the region still suffers from a red alert time and urge caution in their behavior.

“This is going to be a dynamic situation throughout the year,” said Teller County Administrator Ross Herzog, who admitted the new resolution, calling for Stage 1 restrictions, is being reinforced by improving conditions.

“We have moved from an extreme fire danger to a high fire danger. The fire danger is not over,” said O’Conor, in urging the Cripple Creek City Council to accept the more lenient Stage 1 restrictive rules, but stressed the importance of abiding by vigilant fire safety rules  He cited the storms that occurred in late May, dumping several feet of snow as the real rule changer.

The move from a Stage 2 to Stage 1 level, though, prompted a little discussion by the Teller commissioners at the close of their regular meeting.

They admitted they have received phone calls from citizens urging them not take this action.  In most cases, residents often grumble about restrictive fire measures, especially when it comes to outdoor cooking and trash burning. But the High Park blaze, which scorched more than 1,500 acres, has signaled a red alert for the entire region. Prior to the late May’s record spring snow storm, conditions were being compared to the danger zones of the Hayman fire in 2002 during which an extreme drought and overgrown forest ruled the land.  It was referred to as the perfect storm for a horrific wildfire.

In addition, the 10-year anniversary of the Waldo Canyon fire is only days away. The Waldo blaze destroyed several hundred homes in sections of Colorado Springs, and forced the evacuation of many lower Ute Pass and Woodland Park area residents for several weeks. In fact, close to 35,000 people were evacuated in the Pikes Peak region, and insurance claims nearly hit the $500  million level.  It also paved the way for serious flooding in subsequent years and led to the daily closing of Hwy. 24 for several summers.

The commissioners say they received complaints about this pending action from their constituents.

However, they note their decision is being backed up by the opinions of local fire chiefs and current weather conditions. “This is a balancing act,” said Commission Chairman Dan Williams  “We want to make it as less restrict as we can.”

At the same time, he and his peers made it clear they would leave the door open for tightening up their restrictions, if dangerous conditions prevail again.

“We rely on the experts and science,” said Vice-Chairman Erik Stone.

Commissioner Bob Campbell stated that the board’s plan to move into a Stage 1 environment was prompted by the advice they received from local fire chiefs and the sheriff’s department. “It had the input of the fire chiefs,” said Campbell, in supporting the measure for a return to Stage 1 restrictions.

All the commissioner stated they respected the cautionary phone calls they received, but  believe the recent conditions, capped by a huge snow storm, justified less restrictive fire conditions.

However, following the snow storm of late May, the region has gotten hit with a big warming trend and high winds on certain days. But no serious fires have been triggered in Teller County in recent weeks.

Under Stage 1 restrictions, open campfires are banned, along with fireworks and many burning activities. But charcoal grills are permitted, and a green light has been signaled for lighting up a cigarette or cigar outdoors.

But again, officials recommend extreme caution, as reports indicate the area could be experiencing a fire danger for much of the summer.

If Teller can survive another couple of weeks, then the monsoon season could ease these dangers even more.