Even though the event doesn’t take place until the end of June, people all around the region are already talking about the 100th Running of the Pikes Peak International Hill Climb. The race has actually been around for longer than a century, but the 100th race takes place this year due to the event taking years off during World War I and World War II.

Even a month ahead of race time, the event has been the talk of the region every time someone turns on the news. For the 100th running, several rookies have put their names on the list and some racing stars will be making grand returns for the big day.

The arrival of Ken Block in his supped-up Porsche seems to be the racer getting the most interest. A member of the famous Unser family has also made headlines after announcing her desire to race the mountain.

In fact, the event has become such a big deal recently that the City of Woodland Park has even joined in on the festivities. Starting this week, the city will be displaying banners on light posts in town this year to celebrate the event.

According to Woodland Park’s Communications and Marketing Coordinator Grace Johnson, the move was made this year as a way for the city to get involved with the big regional event. “With us being in so close proximity to the race, it made sense that we be more involved in that and historically we haven’t been involved at all,” Johnson said. “And we have Clint and Codie Vahsholtz in town who are heavily involved in the race.”

The city will also have a booth during the race’s Fan Fest this year in downtown Colorado Springs. Johnson said that the city will be set up to inform the 35,000 people who attend the event about all of the things Woodland Park has to offer.

Dave Wood owns a bail bonds company in the area and he has decided to race the mountain for the 100th running. This year Wood will be racing for his 15th time up the mountain in the open wheel division with his Wells Coyote.

Wood started racing go karts when he was a kid and then he moved up to racing motorcycles. But then according to Wood, he was caught by the old saying that goes “with age comes a cage” and switched to racing cars.

Wood said that he has taken third place a few times over the years in the open wheel division and that is the best he has ever done. His wife Lorie Wood has also ran the race more times than any other woman with a dozen runs.

According to Wood most of his racing days took place when the track was still dirt. “I started racing when the track was dirt,” Wood explained. “It was a lot more fun in my opinion when it was dirt. And that’s pretty much what all of the drivers say around here because it was all dirt when we were growing up. Now the people from all over the country who come here would disagree with me because they have only raced on it when it was pavement.”

Wood said that he decided to race this year due to the change in lineup. When he had raced the mountain the last few times, motorcycles would race first and then by the time the cars would get to go up, bad weather would come in and the track would close half way up.

He is running this year because motorcycles can no longer race the mountain after the tragic death of famous motorcycle racer Carlin Dunne in 2019. Last year, the cars were able to get off the mountain before vicious storms struck the mountain range.

One Colorado resident, Jimmy Ford has decided to race the mountain for the first time this year. The big news is that he will be racing a Ford Bronco racer in the Pikes Peak Open Division that was made famous by patriarch Leonard Vahsholtz in the 1990s. 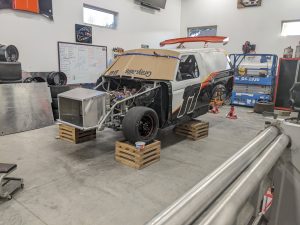 Ford first started racing quarter midgets as a kid winning several championships. He then raced his dad’s hill climb car until he was 18. 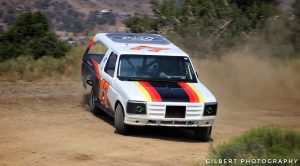 He said he has continued to race hill climbs as an adult and then when Vahsholtz old Ford Bronco came up for sale two years ago, he decided to purchase it. “I bought it then I thought it would be a good idea to race Pikes Peak,” Ford said. “Everybody always asks me if I have raced Pikes Peak before and I have always told them no, but I have raced in New Zealand. So I decided to give it a shot in Leonard’s old Bronco for the 100th race.” 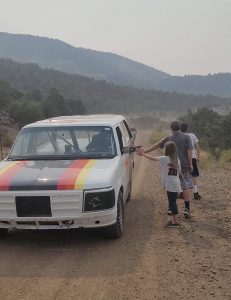