When both locals and tourists drive up Hwy. 24 into the Ute Pass region, many are dumbfounded regarding the use and history surrounding a giant building that sits behind a tall fence, just below the town of Cascade.

The mega mansion has stirred more questions than answers.

In fact, the building is known by just about everyone in the region as being mysterious since it is not open to the public. 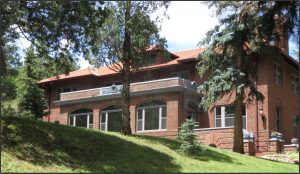 However, one fact many don’t know is that the building is actually open for a tour to outside guests on a very rare basis. The Ute Pass Historical Society (UPHS), based in Woodland Park, actually has been offering tours of the building once every three years.

But due to the pandemic, the tours that were scheduled for 2021 were delayed by a year. Therefore, this July 16-17, UPHS will be hosting their tours of the historic Marigreen Pines Estate in Cascade, which is currently the home of the Holy Cross Novitiate.

Tickets went on sale last week as the number of visitors is limited. The tours start at the Ute Pass Elementary School with a short historic video as no personal cars are allowed to be parked on the property. 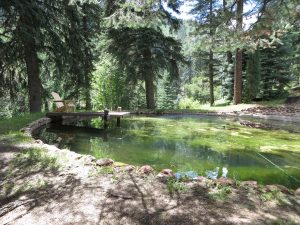 The visitors then ride a bus from the school to Marigreen Pines with a docent pointing out historic places on the way there. Once arriving at the historic mansion, visitors will hear the tales of the Cusack family who built the facility while touring the entire gorgeous property.

The Story of Thomas Cusack

Thomas Cusack eventually became known as a self-made millionaire, but he was not so fortunate when he was growing up. Cusack was born in Ireland in 1858 and then he moved to New York City with his family in 1861 to escape the Irish potato famine.

But then tragedy struck Cusack’s family when his mom died of a disease contracted on their journey in Ireland and his dad died in an accident shortly after that. At the age of nine, Cusack was an orphan who got sent to live with relatives in the Chicago area.

While in Chicago, Cusack got a job working as a sign painter to put himself through college. He then opened up his own sign and carriage painting shop that quickly grew to the largest outdoor advertising company in the U.S.

Cusack then earned the nickname, “The Billboard King of Chicago.” In fact, Cusack’s business showed assets worth more than $26 million when he retired in 1924.

The Cusack Family Falls in Love with Colorado

In the 1880s, Cusack used to visit the Pikes Peak region when he fell in love with the area. In 1890, tragedy struck the family again when Cusack’s wife died giving birth to their daughter, Ellinor, who passed away soon after.

Cusack got married again five years later to Mary Greene of Chicago. During their honeymoon, the two newlyweds went to tour the Pikes Peak region when Mary fell in love with a house on the hill near Cascade.

Cusack ended up purchasing the house as a summer home as a wedding gift for Mary. He then named the house the Ellinor Cottage to honor the child he had lost.

The Construction of Marigreen Pines 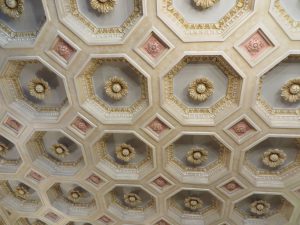 As time went on, the Cusack’s three-bedroom cottage grew as the family got bigger. It was expanded into a 13-bedroom home. In the 1920s, the Cusacks decided to build a mansion on the property, but his wife, Mary, died of cancer in 1922 before the construction was completed.

The mansion was finished in 1923 and Cusack honored his late wife by naming the estate after her. During that same time, Cusack also purchased the entire town of Cascade. This became known as the first private purchase of a town in the United States.

Cusack planned on building hotels and resorts in Cascade, but only one was ever built that eventually got done. Unfortunately, Cusack only enjoyed his extravagant Marigreen Pines mansion before he passed away from pneumonia in 1926 at the age of 68.

Cusack’s son Frank then ended up taking over Thomas’ plans for developing Cascade. The Cusack family then owned the estate and lived there off and on until 1978.

That year, the Cusacks then decided to donate the property and mansion to the Congregation of the Holy Cross in South Bend, Indiana which is primarily known in the country for the Notre Dame University.

Marigreen Pines still operates as the Holy Cross Novitiate, which is the only one in the country. Young men who are contemplating devoting their lives to the priesthood or brotherhood come to the Novitiate to spend a year immersed in Holy Cross religious life.

The year of time to contemplate is important so that the novitiates can be certain that the decision is the right one for them. After completing their novitiate year, the young men can then make their first vows of poverty, celibacy, and obedience.

Anyone can purchase tickets for the Marigreen Pines Tour by going to the UPHS website at utepasshistoricalsociety.org.