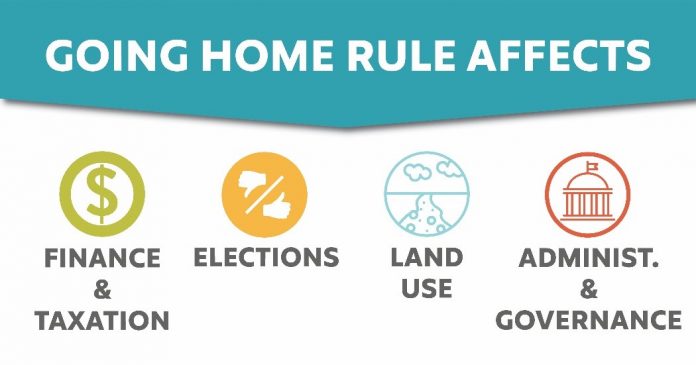 The Teller County commissioners have nearly conceded defeat in the battle to squash efforts to open the doors for collective bargaining and negotiations for their workers through union representatives.

They recently  joined other rural counties in taking this fight to the last round, in urging Governor Jared Polis to veto Senate Bill 230, the legislation that permits collective bargaining for public employees at the county level.

But according to all  indications, Polis, a staunch Democrat, is on board to sign the legislation, okayed by lawmakers in a fairly partisan vote. (State Democrats favored the bill, while Republicans said no.)

However, at  last week’s regular meeting, the commissioners threw out an ace card that leaders never discussed previously:  Becoming a home-rule county, and consequently, freeing itself from these potential collective bargaining mandates.

Currently, only two counties  in Colorado wave this banner.

But in the wake of SB 230 and other possible pending mandates that affect rural counties, more jurisdictions could explore more home-rule options.  Currently, the only two counties that are home rule are Pitkin and  Weld counties.

But such a process won’t occur overnight and is easily several years away.  Commission Vice-Chairman Erik Stone, who has taken the lead role in opposing the collective  bargaining package, stated that a local commission would have to be selected and a future vote must approve the actual home-rule status and the proposed constitution.

“It would be almost like having a constitutional convention,” said Stone, at the close of last week’s regular meeting. Under a home-rule system, a county government can take a larger role in managing its own affairs and drafting a mini-constitution.

Home-rule options are fairly common for municipal jurisdictions, with most cities in Colorado, waving a home-rule banner. But this option is not common at the county level in Colorado.

This path, though, would permit an exit from the collective bargaining bill that has stirred mostly negative sentiments from leaders and officials in Teller County.

Some legal experts contend the package is less severe with the additional changes, such as one measure that is optional for counties to agree to collective bargaining contracts. But that viewpoint is not supported by Stone and his fellow peers.

“With the additional amendments, the bill is less bad,” said Stone, in an interview last week.

Stone and the other commissioners aren’t happy with the final product and the possible unfunded mandates. “They really stuck it to the counties,” said Stone. “This (SB 230) is a political  gift for labor unions.”

Stone stated that a number of counties around the state are meeting next week and may explore their options, including efforts to pursue more home-rule designation possibilities.

Concerns have been growing that the rural interests of many counties in  Colorado aren’t getting addressed, with the current makeup of the state House, Senate and the governor’s office.

Stone is worried about the financial impacts from SB 230.  And under one of the 11th-hour amendments to the collective bargaining legislation, a home-rule county can  opt out completely.

But on the downside, a home-rule pursuit for a county government can be a rigorous and time-consuming exercise.  Plus, many citizens may not favor pursuing this path.

In any case, a local vote on home rule would not occur for at least two years, estimated Stone.

However, in recent years, support has been growing for more local control, especially in matters related to gun control, gaming, property rights and new regulations.

Veteran Commissioner Bob Campbell indicated that the pros and cons of home rule would have to be evaluated.

Collective bargaining is not the only gripe the current leaders have with state lawmakers.

At last week’s meeting, Stone cited inflation as a big overall concern with pending impacts.  He noted that inflation  could halt key road projects in the region. He said the repaving of Hwy. 24, a project that would benefit travel to and from Teller County, has been placed on hold mainly due to contractor bids that far exceeded preliminary budget limits.

He cited bids on some road projects that soared above 30 percent  of the projected  costs. As a result, the state cannot do nearly as much as it planned.

“That is going to affect our operations,” said Stone. “Hwy. 24 is falling apart,” said the commissioner.

Solutions to this problem are still unclear. This is an ssue county leaders admit they must monitor constantly.