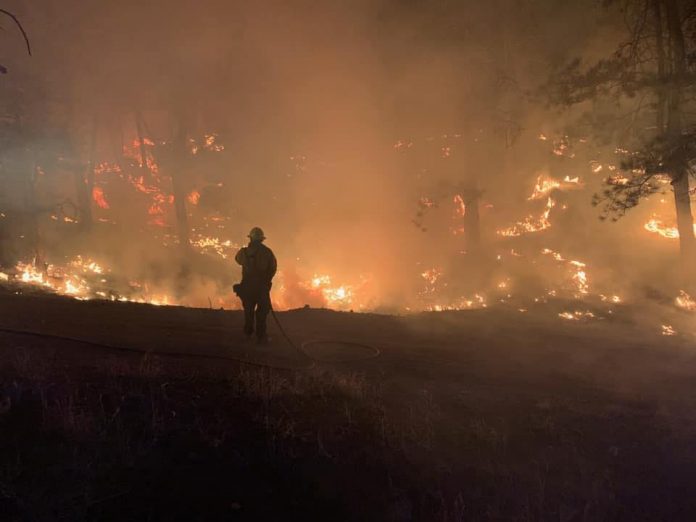 The first significant wildfire of the season struck Teller County last week with a fury that experts have feared for months, igniting outside Cripple Creek, forcing the evacuation of several hundred residents from a spree of subdivisions, raging across nearly 1,500 acres and putting many homeowners on the edge.

It also led to the cancelling of a much touted donkey release event in southern Teller and put a strain on animal shelter resources. But on the upside, no structures have been lost, as of Sunday morning. Plus, the High Park Fire hasn’t threatened the gaming town of Cripple Creek.

Last Thursday, the Teller County Commissioners upped the county’s fire ban to a Stage 2, but then later that day a fire ignited on the southwest side of Teller. The fire sparked and spread quickly forcing over 100 residents to evacuate on the first day the wildfire started.

As on press time,  fire crews had reached 10 percent containment  and the blaze had grown  to more than 1,100 acres. No briefings were held on Sunday.

On Saturday, more residents were still evacuated including most subdivisions, located west of Cripple Creek.

Cripple Creek city officials were closely monitoring the fire since it was only about five miles west of the city limits. Friday night and into Saturday several Cripple Creek residents were preparing to evacuate if the fire moved closer to the town. The evacuation center was eventually relocated from the Cripple Creek High School to the Woodland Park High School.

The High Park Fire ignited on May 12 just after 4 p.m. in an area just east of County Road 11 in southwestern Teller County. Initial reports on Thursday indicated that the fire was near the Lakemoor subdivision and was just over 380 acres in size.

Crews worked on containing the fire overnight Thursday and officials held a press conference Friday morning to give updates. By Friday morning, officials said the fire had grown to more than  400 acres and that there was no containment established.

The officials reported that no structures had been lost, but they would not say how close the fire came to threatening buildings in the area. It was confirmed that 42 homes were evacuated from the Lakemoor subdivision which included around 120 people.

At 1 p.m. on Friday, officials held a town hall meeting for residents who were evacuated. During the meeting, it was announced that the fire had grown to 673 acres and there was still zero containment.

At around 5 p.m. Friday night, the Teller County Sheriff’s Office posted a new map of the fire and announced that it had grown to 846 acres and that there was still zero percent containment. They also announced that High Park Road is now closed from Four Mile Church to Mile Marker 3.

The sheriff’s office also announced at 6:27 p.m. that Teller County Road 1 (Teller 1) is closed northbound at Venture Foods in Cripple Creek and southbound at Evergreen Station south of Florissant. Shortly later, they announced that Lost Burro Campground and residences in the Cripple Creek Mountain Estates west of Teller 1 were also under mandatory evacuations.

After the evacuations went out, it was reported that the fire had grown to 931 acres.

By Saturday morning, officials announced at a morning briefing that the fire had grown to over 1,000 acres. However, it was announced that still no structures had been lost.

According to the Bureau of Land Management’s Incident Commander for the High Park Fire Matt Norton, the growth was due to fire growth on Friday and burn out procedures.  He said that due to the work air and ground crews did at the west side of the fire, he could announce 10 percent containment by Saturday.

He said that on Friday the fire grew into a 70-acre plot that they could not get grounds crews into due to the terrain. The firefighters used aircraft to fight that section of the fire. Norton also said that more resources would be put into fighting that section of the blaze over the weekend.

Teller County Sheriff Jason Mikesell told the crowd at the morning briefing on Saturday that the new evacuations on Friday night were due to where the fire spread on Friday. “A lot of you that live in this area know that the Rattle Snake Gulch area is really hard to get into,” Mikesell said. “So went it spread into that area, it triggered a lot of the events we are talking about including the new evacuations. The reason for the new evacuations was that when it moved into those areas where it is hard to fight, we can’t get hand crews around it. That’s why you will see more aircraft around there this weekend.”

The sheriff also said that the entire Cripple Creek Mountain Estates subdivision and the Rhyolite Mountain area were on pre-evacuation status through Saturday. However, Teller County Road 1 (Teller 1) had reopened by Saturday morning.

The evacuation center for homeowners and residents displaced was changed to the Woodland Park High School.  The Woodland Park City Council also conducted an emergency meeting on Saturday, via Zoom.

Pleas also were made by the Teller County Regional Animal Control Shelter for folks, not impacted by the evacuation orders, to temporarily house animals at their residences, as their facility has reached an overflow.  In essence, they would become foster parents of the pets for a short while.

Serious fires of this nature, though, aren’t unusual for Teller County. The county is bracing itself for the 20th-year anniversary of the Hayman fire of 2002, which scorched nearly 140,000 acres and more than 500 homes.

Actually, the latest fire mirrors that of the High Chateau blaze of 2018.  For the last several years, Teller has gotten a slight reprieve from the extreme fire dangers.

But that won’t be the case in 2022, as already our region has been bombarded by close to 10 fires.