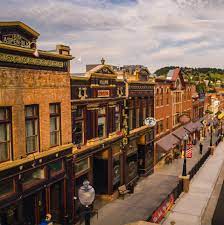 Triple Crown Casinos has scaled the final regulatory hurdles, setting the stage for construction to begin this year on a new 101-plus-room boutique hotel, and a spree of new amenities, including a general store.

This will mark the next major casino hotel undertaken by a major casino player.  Based on current plans, the city could experience a doubling of its current lineup of hotel rooms within the next several years.

Last week, the Cripple Creek City Council, with little discussion,  approved a development plan and master license agreement for the new Midnight Rose Hotel, along with the final readings of earlier approvals.

With the agreement, Triple Crown faces a deadline of Nov. 30, 2024 to complete the project and it sets the arrangement for a performance bond. As part of this final agreement, casino group received a height variance, allowing them to construct a seven-story hotel. It also was granted a partial road vacation on Third Street.

No one objected to the final development request at last week’s council meeting.

The main concerns raised by the council dealt with the performance bond. But attorney Erin Smith assured the council that this agreement with Triple Crown stipulates a definite price based on the square footage constructed along the public thoroughfare.

In the past, this subject has triggered concerns, with some work getting started by certain developers and then abandoned.

While taking a firm stand on the establishment of a performance bond, city officials are willing to be more flexible on the completion date, due to the natural delays that have occurred in the construction process, prompted by the “supply chain disruptions.”

Smith said the applicant could obtain relief from this final completion date, but would have to reimburse the city for any infrastructure-related disturbances that occur in the interim period.

The Triple Crown Casinos received the preliminary go-ahead for its highly touted project in late February. Earlier this winter, it was signaled the green light from the town’s Historic Preservation Commission, which really set the project in motion.

Their proposed development has been well received and hasn’t generated the extent of controversy that the Bronco Billy’s proposed 300-plus-room hotel project experienced.

City political and business leaders welcome the addition of new hotel rooms, viewing this as a way to help the town become more of a destination area.

While city leaders eagerly granted the Triple Crown the go-ahead and heard about a slight increase in the number of betting devices in the most recent quarter, they got a dose of bad news on the legislative front.

Cripple Creek Finance Director Paul Harris warned leaders of an 11th hour bill, endorsed by the state’s Joint Budget Committee, that would divert some of the set revenue the gaming towns currently receive to pave the way for  more funding for alternative uses, such as higher education. Harris stated this would have an impact on their pot of historic preservation dollars. That ultimately could affect many revered historic restoration efforts, such as the regular melodrama performances at the Butte Theater.

He stated that negotiations are expected with officials of Black Hawk. “We have been talking with Black Hawk,” said the finance director.

Harris expressed concern about the timing of the bill, and the fact that the gaming towns were not contacted for comment on the pending legislation.

On the upside, time is on the side of Cripple Creek as the 2022 legislative session ends within the next week. On a more positive note, city officials are getting more support from certain legislators for efforts to try to obtain more funding from sports betting activity, which occurs in facilities and apps provided by the casinos. But nothing is expected to occur in the current session.