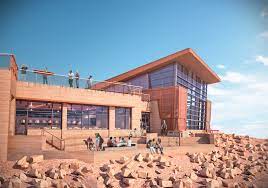 Reservations Required for Parking On Top of America’s Favorite Mountain

Anyone who has lived in the Ute Pass region knows that out-of-town visitors love to frequent the area’s prime tourist attractions. As a result, you may become an area tour guide for several days.

One of the excursions that usually tops the list is to venture to the top of America’s Mountain (Pikes Peak). The mountain is known as one of the highest peaks that people can drive up to, just about year round.

Now greeting Pikes Peak travelers at the top is a new summit attraction, which has been greeted with much awe, as the project spared few expenses.

The first summit house on Pikes Peak was built in 1873 for $2,500 using stones found on the mountain and it was used as a weather station for the United States Army Signal Corps. Then in 1916, Spencer Penrose built the highway to the summit and a second summit house that burned down in 1953.

By 1964, the city of Colorado Springs had taken over control of the summit and highway and they built the new summit house that would serve visitors for the next several decades. In 2013, local leaders started meeting to devise plans for a new and improved summit house that crews officially broke ground on in 2018.

However, even though the new summit house has been open for almost a year now, construction on it is slated to continue until this September. Different parts of the building and the parking lot are still getting work done on them.

The new building is not only much bigger, but it offers more than the old summit house did. The new building now features a new retail and dining experience. But, locals should know that they kept their famous donuts and they even purchased a bigger and better donut machine.

The summit is now featuring a new interpretive space. Visitors can download an app on their phones and walk the new exterior interpretive loop, an ADA walkway that interprets the beautiful views, historic sites, and key focal points across the peak.

When the new building opened, parking was limited due to construction so people could only go part way up and take a shuttle to the top. Parking is still limited on the top, and for this summer there will be a new reservation system to get to the top of Pikes Peak.

People will still have access to most of the mountain like they did before, but starting May 1, those who wish to park on the summit will have to make reservations online to reserve a spot. Officials say that they currently have about 140 parking spots and reservations will cost $2 to reserve a space.

People will have to show proof of purchase at the gate. The reservations will be made in two hour increments and visitors must arrive between that two-hour window. Reservations can be made for anytime in between May 27 and September 30, but people can start making reservations after May 1.

Pikes Peak officials said that they decided to implement the reservation system due to an increase in traffic to the summit and limited parking. “What we found last year when we opened up the new summit visitor center on the peak is that visitors were staying much longer than they had previously,” Manager of Pikes Peak Americas Mountain, Skyler Rorabaugh said. “We understood that we needed to shift how we can create the best visitor experience. We don’t want a lot of traffic congestion if we want people to be able to park and enjoy and not have to drive around or sit there and wait.”

The summit of Pikes Peak will now be yet another local destination (like the Manitou Incline Trail) that visitors will need to now plan ahead to enjoy.