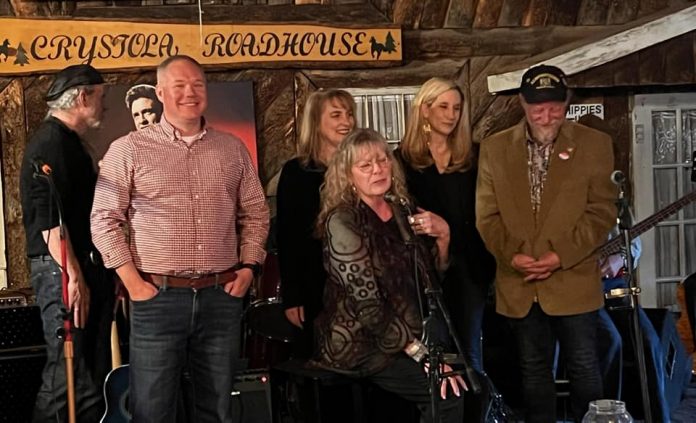 Talk about Bad Luck Tuesday, when the worst imagined nightmare for local officials began to unfold.

On the April 5 election day in Woodland Park, turmoil struck as the election judges attempted to count ballots. A tree fell that day that downed a power line, shutting off half of the electricity in the city hall building.

The city staff pulled together and set up work lights and gave the judges flashlights to count the ballots. The setback with power created a line out the door from 5:45 to 7 p.m., forcing the staff to have “all hands on deck” to help voters turn in their ballots.

After a city election that became heated with excessive mudslinging and social media trash talk, the status quo councilmembers came out on top. This year the election was touted as one of the most important in history as an extra seat was up for grabs.

In the end, both incumbent councilmembers and mayor earned the right to keep their seats. The new wave of candidates calling themselves “conservative” were sent packing by a substantial margin.

Candidates Matthew Hayes, DeAnn Bettermann, and Don Dezellem did not receive enough votes to earn a seat as they all got less than 1,000 tallies.

As a result, the council will resemble a familiar lineup, with the exception of two new faces.

Council members Rusty Neal and Robert Zuluaga still have two years left on their term and Nakai, Case, and LaBarre earned the right to stay seated on the council.  At Thursday’s council meeting, the panel elected Kellie Case to serve as the city’s mayor pro tem.

Voters also got to decide on three questions. One gives the right to council to remove appointed or elected members from their seats due to misconduct, another clarifies what “conflict of interest” means, and the last better specifies what the council can do when it comes to appointing people on the dais. All three of the ballot questions were passed by significant margins. This would give the current cadre of leaders more power, according to preliminary reports.

The election this year broke a record for having the largest turnout for vote in which only city matters were on the ballot. A total of over 2,500 ballots were turned in, which equates to around 50 percent of the registered voters in the city.

The judges worked on counting the ballots until around 8:35 p.m. Tuesday night. The results were officially announced just before 9 p.m. when city officials called the winners at the Crystola Roadhouse where they were all having an election watch party.

As the new council took their seats, just about all of the faces on the dais stayed the same as before with one exception. Ott and Connors are the only two new members and former councilmember Stephanie Alfieri is no longer on council.

Alfieri was elected during the special election in November 2020 to fill  former council member Noel Sawyer’s spot due to him resigning after he lost a bid for mayor. Alfieri beat out Catherine Nakai and Don Dezellem by a rather thin margin to earn her seat.

However, after sitting on the council for a little over a year, Alfieri chose to not put her name in the hat for a second council term. Before she officially left the dais, she gave a short speech and told everyone that she did not want to hear any farewell remarks from council members or city staff.

“The tradition up here is for outgoing councilmembers to say a few words about their term in office as well as their fellow councilmembers, but I think most of us know that is a really bad idea in this case,”

Alfieri said. “The whole time I have sat up here I have never peddled any BS to the point of being directly and brutally honest. And a lot of people didn’t like it. Please, save us all the dog and pony show. The nicest thing you can do for me at this point is to simply allow us to blow through this point of the meeting and immediately move on to the oath of office for the new council members so that I can officially and finally be released from this hellacious cesspool.”

The mayor told Alfieri that she didn’t have to stay after her statement. But Alfieri insisted on staying until the new councilmembers got sworn in.