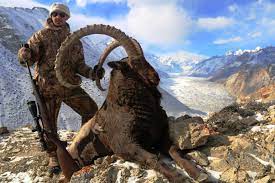 The Shining Mountain Golf Course and Event Center in Woodland Park will no longer serve as the region’s prime golf hub.

Instead, the popular links will reign as the area’s  prime hunting ground, and a site for unprecedented safari-like adventures.

In a rare but not unexpected move, the nearly 500-acre development has been recently purchased by the newly-formed Teller Safari Company, with plans for a preserve for a wild animal refuge,  including  an ideal and scenic sports area for mountain lion, bobcats, Lynx and other wild animal hunting, and even possibly even more dangerous cats for exclusive hunts.

The current front nine will be a breeding ground for mountain lions, while the more expansive  back nine could even become a roaming stalking area for special African cats.

Details are still sketchy regarding the date of the transition, but plans are proceeding quickly in lieu of current state legislation.

Plus, with stern city water restrictions still confronting the development, the bid for the safari bid has appeared to rank as a natural fit.

“With the state, including our governor’s plans to outlaw wild animal hunting, this is one way to overcome our anti-hunting lawmakers and other out of control legislative nonsense,” stated Sony in a prepared statement. “They just don’t respect the rights of rural  Coloradans anymore. This would give us an exempt no-restrictive hunting ground to bypass the onerous restrictions of the state government.”

“This is an attack on our way of life, and we need to respond,” added Stony.

This comes in the wake of new state legislation, aimed at imposing serious $10,000 fines, with a mandatory three-year jail sentence, against the shooting of  mountain lions for recreational purposes. An earlier bill, proposed by several urban legislators in the Denver area, was killed by a Senate committee. But the new legislation has the full support of Governor Jared Pollis, and appears to have garnered enough votes to  become law. It has apparently experienced an unusual positive momentum change from the previous legislation.

But business owners and area politicians are striking back.

“This would  make an absolute great resource for recreational hunting,” added Williamms.  Both Williamms and Stony have agreed to act as board members of the new Teller Safari Company, to coincide their leadership roles with the Teller County government.

If successful, part of the development may even be used for more intensive and exclusive safari-like hunting excursions of special game, including African tigers.

The current clubhouse bar/restaurant and special event area  will remain intact, and plans are currently being explored to reroute some of the current links’ holes to still feature semblance of a golf course on the property.

“Maybe the wild animals could serve as a deterrent for stray shots,” quipped Williamms.

“I think this is a great idea,” said Shining Mountain owner Greg Brownie.  “We have always viewed this property as one being on the forefront of recreational opportunities.  This will overcome any challenges we face over water.”

An added advantage, according to Shining Mountain operators, is that the forthcoming plans will serve as a deterrent to residents’ walking their canines on the property, and a way to further preserve the turf.

Woodland Park Mayor Hilary LeBarri, welcomed the plans with much enthusiasm and  offered to fire the initial ceremonial shots, aimed at loose lions.

“Woodland Park has been regarded as the gun capital of the United States for small communities. Now, we will have a hunting hub to go along with that reputation,” said the business owner.

Happy April Fool’s Day! Today officially kicks off our April Fool’s week. Make sure to pick up our special Mountain Crackpot April Fool’s edition that comes out on April 5.