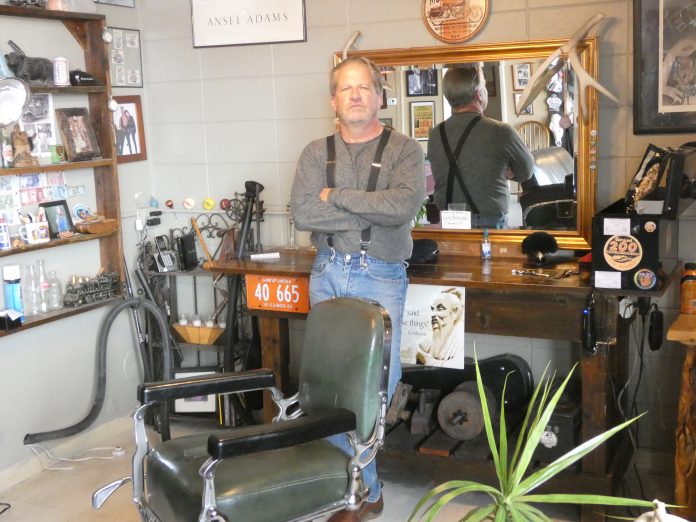 When most people think of one man bands, they sometimes think of famous rock stars, such as  Paul McCartney, John Fogerty, Phil Collins and Steve Winwood,  who often produced solo albums by playing all of the instruments in the songs and mixing them together.

For more modern rock fans, Trent Reznor was also a famous one-man band who played all of the instruments for his band, Nine Inch Nails.

With the technology advancing in the music industry, there are now many more musicians who follow this same path of playing, creating and producing their own albums.

Recently, lifetime musician and Teller County resident Jeff Nudiano added his name to the list of  one-man bands, when he made an album called “Unhealthy Obsessions.” 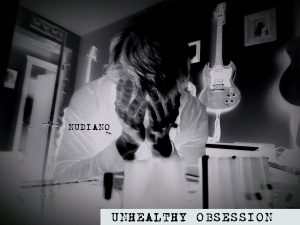 The verdict is still  not in regarding the response he will receive, but the production ranks as quite a musical achievement, especially for a local business owner.

Nudiano is well known in the community as a barber/hair stylist. He has lived in the area since 1999, and used to own a women’s hair salon in Colorado Springs. He has owned the Wise Guys Barber Shop in Woodland Park for nearly six years.

The barber/musician started getting into music at   seven-years-old, when his mom forced him to take piano lessons. After discovering a love for music, he taught himself how to play the guitar, which has been his instrument of choice ever since he was a young teen.

He then joined several local bands in the Chicago area where he played guitar, bass, and keyboards. Then when he was in his mid-twenties, he decided to join a band called “Joker.” “They were really huge in Chicago,” Nudiano recalled. “They were very popular and I wasn’t crazy about their music, but they were a huge band. So, I didn’t want to pass on the opportunity to play for the band.”

For the next couple of years, Nudiano played for Joker and they toured all over the Chicago area. “They were a ‘hair band,’” the musician said. “They were getting ready to go on a big tour that was going to require everyone to quit their jobs. It was at the advent of grunge and they were a hair band. I thought to myself, ‘This type of music is dying fast.’ I had a good job and a house with a mortgage and I didn’t want to sacrifice all of that for something that I thought was dying a fast death. It was when Pearl Jam and Nirvana and that Seattle sound was first starting to come out.”

After that Nudiano played for a couple of other bands before he joined an acoustic duo. He played acoustic guitar with his partner, even after he moved to Colorado.

But then, his playing partner quit and he chose not to try to find a band that plays at local venues. He then began to put most of his time into recording music before releasing his first album at the start of 2022.

The Divide resident said that his musical interests have changed greatly during the time he has played guitar.

When he first started playing at 14, he listened to the heavy metals sound, from Black Sabbath and Iron Maiden. Now that he is 60-years-old, he has gotten more into progressive rock with Rush being one of his all-time favorite bands.

However, the jury is still not out on what genre to put his latest album into. “I have had a really hard time putting a genre on this album and I still do,” Nudiano said. “I asked old musician friends and my son who is a musician, ’What is this?’ My son told me, ‘Dad, I think you created your own genre!’”

He made his first album completely by himself in a spare bedroom in his house in Divide. In fact, he said the only support he got was from his dog who sat at his feet under his desk while he was recording and mixing the entire time.

His debut album “Unhealthy Obsessions” contains several types of music including power ballads and instrumentals. “The music was a bit of a concept album because I read somewhere that melodies are subconsciously soothing and comforting to your brain,” Nudiano explained. “So, this whole album is about melodies, not just vocal melodies, but my guitar parts are melodic. The bass lines are melodic and everything is melodic. So, that was kind of the concept for this album was melodies, melodies, melodies.”

For his lyrics, he put his focus on emotions that people go through whether good or bad.

Nudiano is currently working on his second album, which he hopes will be done sometime this summer.

His album is listed under “Nudiano- Unhealthy Obsessions” and anyone can listen to it on Spotify, iTunes, or YouTube. He asks that anyone who listens to his music give him feedback by e-mailing him at jnudiano@msn.com.