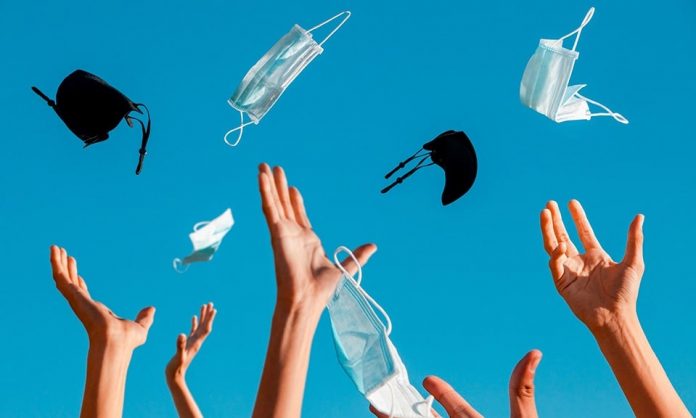 Two years ago, Teller County came to a halt due to the coronavirus epidemic.

Casinos were abruptly closed, and remained shut for three-plus months, and operators had to run these establishments with one hand tied behind their backs for some time. Businesses went into a lockdown and the region lost hundreds of residents, with Teller itself experiencing nearly 5,000 positive cases and 55 fatalities. Mask orders were implemented for months and the impacts permanently led to the death knoll of many area businesses.

Now, nearly 24 months later, officials can’t quite say the pandemic is over, but can proclaim a partial victory over the impacts.

At last week’s county commissioners  meeting, Teller County Administrator Sheryl Decker reported case numbers seriously depleting. “Our case numbers are very low. We are not going to say it is over,  but public health is going into a  more traditional role.”

That means the agency that has taken the lead role in monitoring the epidemic locally will treat COVID similar to other immunization efforts, like the flu. Instead, the Teller Public Health and  Environment agency will start putting more emphasis on some of its other traditional programs, noted Decker, such as women’s health.

And COVID won’t be treated in a crisis format. Hours for the testing site in Cripple Creek have already been reduced to twice a week.

Still, memories linger from the epidemic that turned Cripple Creek into a virtual ghost town, evoking memories of previous pre-gaming decades when more dogs roamed the streets than people.  At last week’s commissioners meeting, new Cripple Creek City Administrator Frank Salvato was introduced by Mayor Milford Ashworth and Interim Administrator Ray White. Salvato told the commissioners he looked forward to working with them, and told the board he now lives in the Colorado Mountain Estates area. “I am excited. I am a citizen of Teller County,” said Salvato, who cited his nearly 40 years of working with officials in a variety of municipal and county governments in Texas.

That could come in handy with the lingering impacts of COVID-19.

The cooperative sentiments were shared and Commissioner Erik Stone rekindled the familiar stories of the casino shutdown. He complimented the former board for working hard to reopen the industry and to keep their doors open

Even after the industry got to reopen on a limited basis in the mid-summer of 2020, they faced the probability of getting closed again right around the  Christmas holidays, noted Stone. And then after a slight relapse in case numbers, the Delta and Omicron variances struck with a vengeance, with the rates escalating for 2022.

Stone said the issue of local control is still a big concern for officials in Cripple Creek and Teller County, and mentioned this as something they hoped to have ongoing dialogue about.

Luckily, the COVID numbers now are on the right path.

No one  is currently in the hospital due to COVID and the infection rate on a per capita basis for 100,000 people, has dropped to 72.  The  most recent seven-day case count on the county COVID-19 website lists this infliction rate at 18, which may mark a record low for recent months. The case positivity rate for those tested has dropped to a very minimal level at below 2 percent, according to Decker.

Just a few months ago, this wasn’t the trend. The per capita rate escalated to more than several hundred and Teller was rated in the red danger zone. Its test positivity rates soared to more than 10 percent.

Now, these numbers have dropped to blue and green levels, which mark major achievements. Cripple Creek Finance Director Paul Harris, a member of the county’s COVID-19 task force, quipped at a recent meeting that he didn’t have to put on his grim ‘Doom and Gloom’ hat on anymore, when giving COVID reports.  “Our numbers are very good,” said Harris.

What a change from a few months ago and even two years ago.

Just as Teller was gearing up for a St. Patrick’s Day celebration in mid-March 2020, the party came to an abrupt, shocking ending. The rumors of a possible business shutdown hit reality within hours A spree of executive orders from Governor Jared Polis kept the entire state in a lockdown period for several months, with no indoor dining permitted.

Then, the county incurred the impacts from the mandated closures, and huge fights often circulated over mask rules. But unlike jurisdictions in nearby areas, such as Manitou Springs, most businesses didn’t impose mandatory mask rules, following the initial several-month shutdown period.

But officials contend the area is not out of the woods yet, due to the probability of more variants. However, Teller officials say the are still taking the position that vaccination and booster shots are a personal choice. That said, they attest to the reality that those who get vaccinated have a much better chance of not getting seriously sick and dying from COVID-19.