During last week’s Men’s Advance at the Charis Bible College, a special group was invited to join former NFL coach and television broadcaster Tony Dungy in a private meeting.

In the last few years, Dungy and CBS NFL announcer James “JB” Brown have come to the college’s Men’s Advance conference to speak to large crowds of only males. 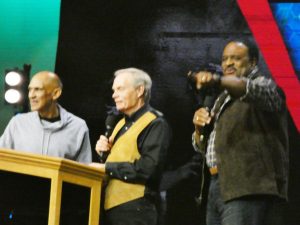 During the event, the two celebrities tell many stories about their experiences in professional football. The focus of their speeches though, tends to be centered on their religion and how they used their beliefs to succeed in their professions.

During last week’s conference, Dungy invited coaches from the Southern Colorado Fellowship of Christian Athletes (FCA) to meet with him during a special gathering.  The coaches from the FCA came from all walks of life.  Some of them were  football coaches, while others  coached sports like golf or soccer.

The FCA is a Christian sports ministry that was founded in 1954 and it is based in Kansas City, Missouri. The organization offers programs for both athletes and coaches.

The purpose of the FCA is to help athletes by connecting them with other Christian athletes and coaches. The FCA athletes and coaches all are given the chance to have “huddles” with fellow members,  where they meet to discuss their lives and conduct bible studies. 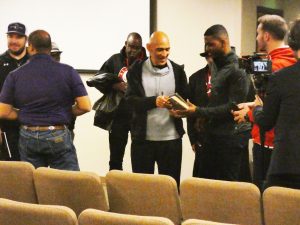 One familiar face present at last Friday’s event was former Woodland Park High School Head Football Coach/Athletic Director Joe Roskam, who developed a strong reputation in the Woodland Park and Teller County area. Roskam is an FCA member and is now the head football coach for Sierra High School in Colorado Springs. He also brought one of his assistant coaches with him to meet Dungy.

Dungy started his presentation by thanking the FCA coaches for everything that they do. He said that coaches are big role models and mentors in an athlete’s life. Dungy encouraged the FCA coaches to keep up their hard work in helping athletes on the field and with their faith. 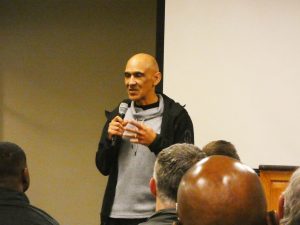 Dungy’s opening speech was short but he did emphasize his appreciation for all of the FCA coaches present. After his brief speech, he opened up the floor to the coaches for questions.

The first question that came from the audience, brought up Dungy’s relationships with former Denver Broncos star quarterback Peyton Manning, whom Dungy coached during his stint with the Indianapolis Colts.  The coach in the audience asked Dungy if he had ever talked to Manning about religion. Dungy responded by  telling a story about the quarterback legend, who currently lives in the Denver area.

Dungy started his answer by saying that the first day Manning was there he came into the coach’s office and they talked about their Christian religion. He said that he had a good relationship with the quarterback, and then he told a story about Manning’s perfectionist traits.

“I grew up in the Steelers’ organization, so the Saturdays before game day was always a short practice that we called ‘Family Saturdays,’” Dungy said. “Everyone was encouraged to bring their kids because we all wanted the kids to know where they work and where they have been. So, there was always kids running around the practice field. When I came to Indy (Indianapolis Colts), I said, ‘That’s how we are going to do it.’

But for Peyton (Manning), during his whole career he wanted to run all of the plays that didn’t go perfectly Wednesday, Thursday, and Friday. So, he would come in with this big long legal pad list of plays he wanted to run. So, after about the third week he came to me and said, ‘I know what you are trying to do with this family stuff, but I’m trying to run this play and Marvin has got little Marvin and he’s not really running hard, Reggie’s got his son running around over here, and I just can’t get my timing down.’

I said, ‘Trust me Family Saturdays have won a lot of Super Bowls and we are going to be ok.’”

Dungy then said that after he retired as a coach and became an NBC announcer, Manning had joined the Broncos. NBC then sent Dungy to Denver to interview Manning as his former coach.

“Brandon Stokely who also played for us was playing receiver for the Broncos and he stopped me before I got into the door,” Dungy explained. “He comes up to me and says, ‘You will never believe what Peyton (Manning) did! He went to Coach (Joe) Fox and told him that we have to get Family Saturdays.’ Because now he has twins and he needed them there.” 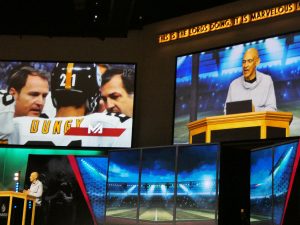 After the private meeting with the FCA coaches, Dungy gave his final speech to the Men’s Advance crowd. At the end, Andrew Wommack and James Brown took the floor with him to answer questions from the audience.