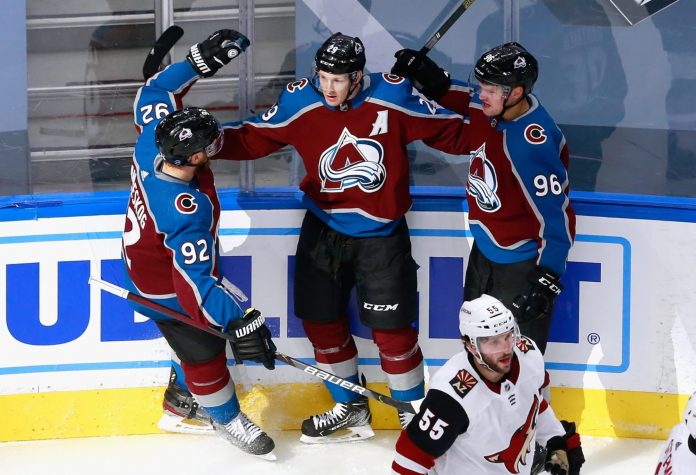 Over the last several years it is safe to say that it is tough being a Colorado sports fan.

In fact, it’s pretty much impossible to be a fair weather sports fan in the state since most Colorado team’s struggle with having successful seasons every single year.

For the last couple of years, both the Denver Nuggets and the Colorado Avalanche have had decent teams that have flirted with seeing a championship game. However, both teams have fallen short in the playoffs and have not been able to make it to the NBA or Stanley Cup Finals.

This year though, Colorado Avalanche fans across the state are hopeful to see the team take home the Stanley Cup. The team came the closest last year as they have been in two decades, but this year they are on track for a more successful season.

When the Avs first came to Denver in 1995 (after being the Quebec Nordiques since 1972), they won the Stanley Cup their first year as Coloradans. The team then took home the cup a second time in 2001 during the days of Joe Sakic and famous goalie Patrick Roy.

But, to the disappointment of fans, the team has not been to the Stanley Cup Finals ever since leaving fans without the chance to watch their team in the big game for over 20 years. The truth is, the Avs haven’t won the Stanley Cup since everyday things like YouTube, Facebook, and BluRay discs were invented in the early 2000s.

Many Av fans feel like they have waited long enough and that this year could be their year. Currently the Avalanche has the best record in the NHL at 40-11-4.

Those who have watched their games recently know that the team has been on a role as they keep winning key matches. Before their loss to the Arizona Coyotes last Thursday, the Avs were on four game winning streak.

And the good news is, the season is already more than half way over. The Avs just need to keep winning games from now until the end of April to set themselves up for a stellar spot in the postseason.

During the season so far, it is safe to say that the Avalanche pretty much has an excellent team all across the board. However, center Mazem Kadri and right wing Mikko Rantanen have been two players that have stuck out above the rest offensively.

Right now, Kadri leads the team with 22 goals and 46 assists in the 52 games he has played. Rantanen has also picked up a total of 65 points and he leads the team when it comes to power play points with 22.

The team’s starting goalie Darcy Kuemper has also put up some great numbers in the 38 games he has played. Kuemper currently has a 27-6 record and a 2.47 goals against average.

The Avs have a full schedule this week four matches on Monday, Tuesday, Thursday and Sunday. Tuesday the team takes on the 16-28 New Jersey Devils on the road at 5 p.m.

On Thursday, the Avs stay on the road to play the tough 37-12 Carolina Hurricanes. Then on Sunday the Avs return home to battle the 32-14 Calgary Flames.

Therefore, this week proves to be a prime time to crack a cold beverage, sit back and cheer on the Avs. With enough support from their fans, who knows the Avalanche could be the team that breaks Colorado’s professional sports’ championship lull that has plagued the state for half a dozen years.