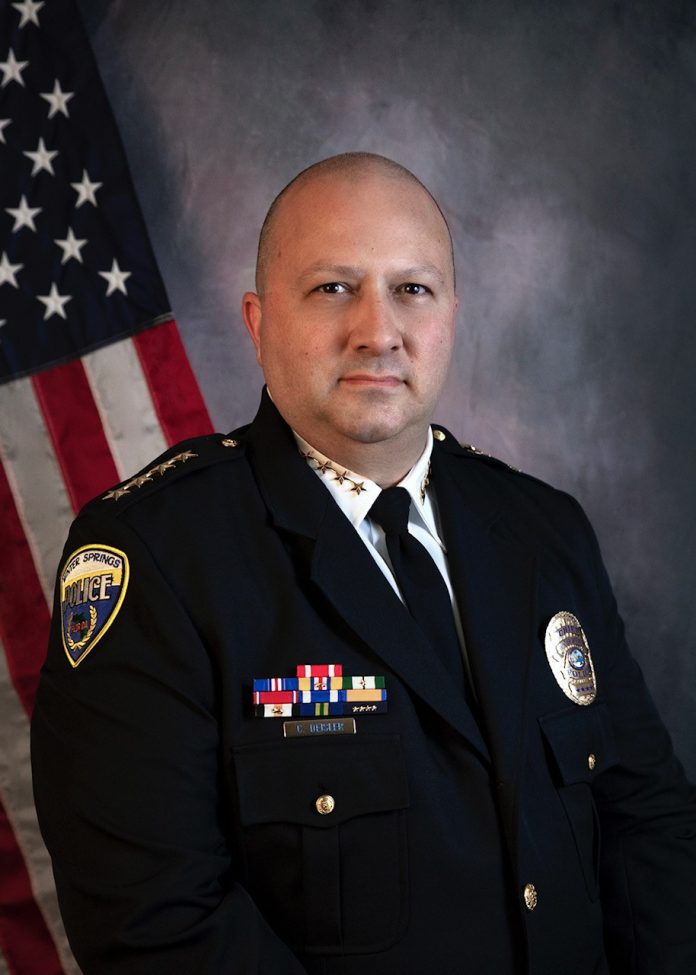 After a nationwide interview process that took nearly six months, the city of Woodland Park has paved the way for a new police chief.

During last week’s council meeting, Chris Deisler was given the green light to start in March as the city’s new head law enforcement official.

Deisler will become Woodland Park’s first full-fledged, permanent chief in months. This was a detailed process that was sparked from much internal turmoil and a spree of internal investigations.

The interview process started about five months ago after former Chief Miles DeYoung retired. DeYoung retired after a third party investigation found that he had created a hostile workplace and  cited alleged  actions of discrimination and harassment.

In the meantime, the department has been held together by Interim Police Chief Stephen Hasler who will stay on duty until Deisler starts his new position March 28. Deputy Chief Rodney Gehrett was originally hired as the interim chief after a commander and a sergeant were let go, but he was hired on as the permanent deputy chief a couple of months ago.

Deisler comes from Winter Springs, FL where he currently serves as the police chief. Deisler has worked for the agency for nearly 30 years and he worked his way up to the top spot from the bottom.

Deisler has been the police chief in Winter Springs since April 2019. The new chief hails from a town that is similar in many ways to Woodland Park.  Winter Springs is a smaller  community (population around 30,000) that is located next to the big city of Orlando. As a result, Deisler has experience working in a small city that has its share of big city problems due to its proximity to a large metropolitan region.

“I am honored and humbled to be granted the privilege to serve this great community as the next chief of police for the Woodland Park Police Department,” Chief Deisler said of his new position. “As we move along together into the future, the dedicated members of the agency and I will work cooperatively to create an environment of mutual trust and respect both within the department and with the community to provide concierge-level police services to those we serve. I look forward to meeting with more community members and partners to share ideas very soon.”

As a part of the hiring process, the city conducted a national search with help from professional recruiter Frank Rojas from Koff & Associates. The recruiting company furnished nearly 100 high quality candidates, and Deisler was selected as one of the top three finalists.

There were several rounds of interviews conducted with Deisler ,including the final interview that included a panel of community members and department directors, a one-on-one with the city manager, and a meet-and-greet with some of the city’s police officers.

According to the city manager, Deisler’s high energy and enthusiasm set him above the rest of the candidates. “Chris has a tremendous energy about him, one that you don’t see too often with police chiefs, at least in my experience,” Lawson said. “He has a great passion for law enforcement. That (law enforcement) is really all he has done in his career and he loves it. And, he is a student of law enforcement as he is constantly learning and trying to better himself. The man works really hard. He did a great deal of research involving the challenges facing Woodland Park beforehand.”

Lawson said that Hasler in his role as interim chief has put forth a tremendous effort in turning around and improving the police department after several serious workplace misconduct allegations riddled the agency.

The city manager believes that Deisler has what it takes to continue the work the interim chief has done in improving the day-to-day operations for the agency.