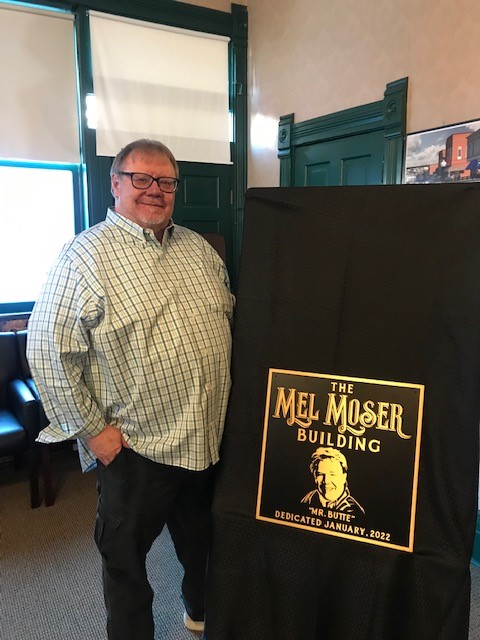 After thousands of shows, playing both roles as heroes and villains, singing countless songs in Olio skits, directing  performers for decades, and serving as the head cheer-leader for local theater, Mel Moser, known as “Mr. Butte,” finally was rendered speechless.

It was a scene that many civic leaders never imagined possible, considering Moser’s reputation as the area’s leading personality and performer, who could command center stage at virtually any gathering.

Last week, the Cripple Creek City Council, in a special ceremony and proclamation, and a newly unveiled plaque. agreed to name the Butte Theater facility as the “Mel Moser Building.”

And oddly enough, elected leaders succeeded in keeping the proclamation as a secret, prior to the Feb. 16 session.  Keeping a secret in Cripple Creek for several weeks is next to  impossible, and resembles an acting feat in itself.

But it happened as Moser arrived just to give a status update, and then was presented with an official building designation in his honor.  The only other city leader to get this same honor was Henry “June” Hack, the former mayor, with the naming of the park and recreation facility in his name.

Renee Mueller, the town’s historic preservation and planning official and a friend of Moser’s since the time they grew up in the same town in Montana, stated that she has never experienced Moser struggling for words like last week. “This is the first time I have ever seen Mel speechless,” quipped Mueller. “He was really touched by the ceremony and the building dedication.”

In their proclamation, the council cited the fact that Moser “for his significant acting talents and outstanding performances in more than 2,050 stage acts” and for “supporting actors and actresses for more than 46 years.”

The plaque, which will be displayed in his honor, lists Moser as “Mr. Butte.”  The historic facility that houses the Butte on Bennett Avenue is now known as the “Mel Moser Building.” 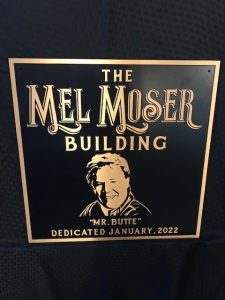 For several months, Moser had announced his retirement from his role as the city’s director of the Butte.

His successor will be Zack Sztanyo, who will start on March 7.

But last week’s ceremony was clearly dedicated to Moser, who actually has been involved in the Butte’s operation as a performer, theater company founder and city director for  more than 20 years.

And previously, Moser worked for the Mackin family, the pioneers of the classic melodrama genre in Cripple Creek, at the Imperial. Moser is never short of stories regarding the early days, when he often had to confront rowdy people in the audience.  In those cabaret-like days, the performers acted as bar servers, waiters and show cheer-leaders.

But he helped develop the melodrama shows at the Butte, when it was originally managed by Steve and Bonnie Mackin. Then, when the Mackins stepped down from their role as theater managers, he encouraged the city to expand its theater operations into a year-round cycle, with comedies, musicals, and holiday performances. Moser has served as a key leader of the Thin Air Theatre Company, which produced many of these shows, and then became the manager of the Butte.

In Best Of surveys, conducted by TMJ News, the Butte Theater frequently snagged top billing as the best entertainment in the region. And Moser often won as the top-ranked personality.

“Those will be some tough shoes to fill,” said Interim City Administrator Ray White. White described last week’s ceremony as one of the highlights of his time manning the city’s operations.

Sztanyo holds a Bachelor of Arts degree from Michigan State University in Political Science-Pre-law, with an emphasis in  theater. The new director also is a graduate of a two-year conservancy at Baron Brown Studio in Los Angeles.

He sports more than 10 years of experience as a stage and film actor. Sztanyo had an acting role at the Butte in 2018.

In addition, he also has a background in fundraising to support nonprofits. City officials, including Moser, are confident about handing over the theater’s reins to Sztanyo. “Zack holds to the Meisner acting technique practices as his commitment to living truthfully and with integrity, contributing to his education, training and talent for the Butte Theater and Cripple Creek,” stated city officials in a press release.

In other ceremonies last week, the council also honored Ryan Lohmeier, who has served as the interim fire chief for an extended several-year period.   The city hired a new fire chief,  Joe O’Conor, who started at the beginning of this year.

Lohmeier weathered a difficult storm, prompted by the coronavirus epidemic. This delayed the city’s search for a new permanent fire chief.