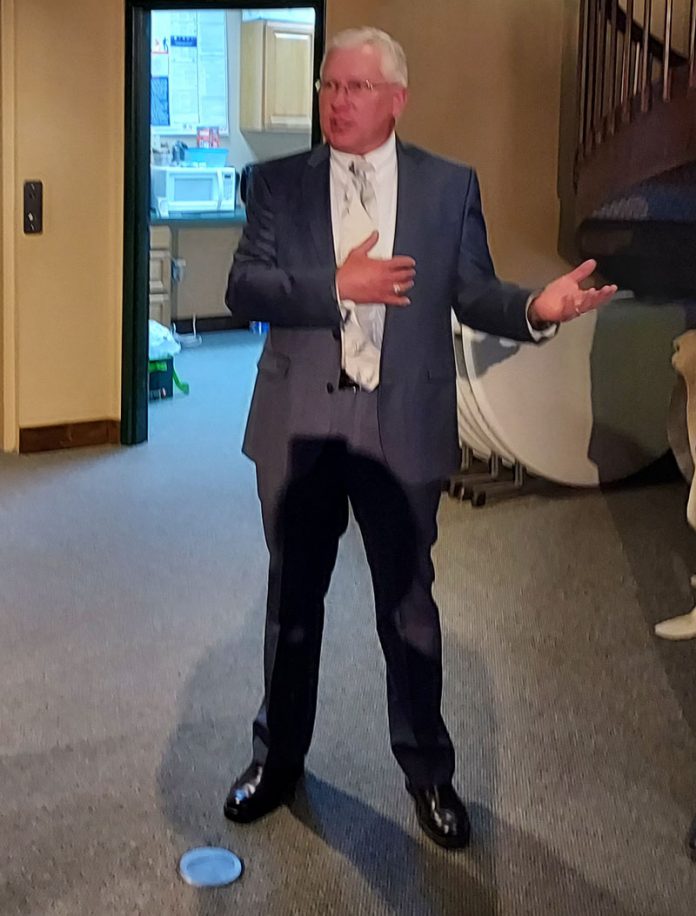 Candidate With Strong Government Roots In Texas Gets the Nod

Pending a final contract approval, the city of Cripple Creek will have its first, permanent head boss in more  than two years.

Following an intensive national search, with the help of the recruiting firm of KRW, the Cripple Creek council has picked Frank Salvato as their new city administrator.  Salvato, who sports nearly 37 years of government experience in a slew of towns and cities in Texas, and who lives in Woodland Park, won the administrative showdown during a final bout of interviews with three finalists for the position.  Salvato emerged as the council favorite, beating out two other finalists, Lisa Parnell-Rowe and Dicran Keuroglian.  All three participated in a public meet and greet on Feb. 10 and partook in behind closed-doors interviews with the council the following day.

If no final hurdles occur, Salvato could take the reins of the city’s operation by March 7, according to interim City Administrator Ray White. His contract with the city will be on the council’s agenda at their March 2 meeting.

“I enjoy making a difference,” said Salvato during a meet and greet at the Cripple Creek Heritage Center.

During an informal gathering with residents and staff members, Salvato stressed his detailed experience in the government arena, in working as a city manager, assistant city manager, building official, fire marshal, code and health inspector and more, for a wide array of communities in Texas.

He cited a variety of challenges he faced in big and small communities, which included dealing with annexation efforts, handling a major arson investigation, overhauling zoning and planning regulations, writing grants and combating personnel issues.

Salvato quipped that he is ready to get back to work after retiring several years ago.

Salvato, who is married, also owns a cabin in Lake City. But his family considers Teller County their prime home now. “We are not leaving this area,” said Salvato during the  recent meet and greet.

The search for  a head boss this time around has been frustrating. “It has been a long road,” said Mayor Pro Tem Tom Litherland. The city has not had a permanent city administrator since it parted ways with Mark Campbell in early January 2020.  Then, the city’s search for a head administrator got stymied by the pandemic.

The city tried to pursue its own search, but this process came up empty-handed, as the council ended up rejecting both of the finalists.  It then sought the help of KRW, which has assisted the city with other searches  for key administrators and managers.

The city had close to 25 applicants for the Cripple Creek head administrator position. It then narrowed the field down to about six, with the council agreeing to interview the final three.

One advantage Salvato had over the other two applicants was timing. He could step into this position at a much faster rate than his competitors.

Plus, he sported much more detailed experience in the government arena.

The new city administrator, if the process reached the final contract approval stage, will have to hit the ground running.

The city is dealing with major growth issues, such as affordable housing, employee shortages, economic diversification and fiscal funding. Although the city is bustling now with major hotel expansion pursuits, the city’s bottom line is struggling as the gaming industry operates with fewer games and betting devices than in the past. Fees on these devices constitute the main funding mechanism for the city government.

One real hot topic subject, expected to hit center stage, could deal with the possible legalization of retail marijuana outlets in Cripple Creek.  This is an option being thrown out by the Cripple Creek Gaming Association, as part of a way to generate more revenue and to diversify the customer base.

A presentation that the gaming association planned last week, regarding alternate revenue sources for the city, got cancelled due to last week’s storm and internet difficulties.

White, however, cautioned that there are “so many moving parts” behind any effort to signal the green light for retail pot. He stated that such an effort would require a majority vote by the citizens in an election on the overall pro-marijuana plan and a related tax question.

Plus, the city will soon hold formal meetings regarding plans to raise the gaming device fees, assessed against every slot and card table in town.  The gaming industry has expressed concerns about this action, while city officials say these fees haven’t changes in 30-plus years.

Another issue that has resurfaced recently deals with the city’s decision to no longer fund special events, other than the July 4th celebration.  Some business owners in the area are crying foul and accusing the city of abandoning its commitment towards promoting family-entertainment. Several major festivals in Cripple have gotten cancelled, as a result of this action