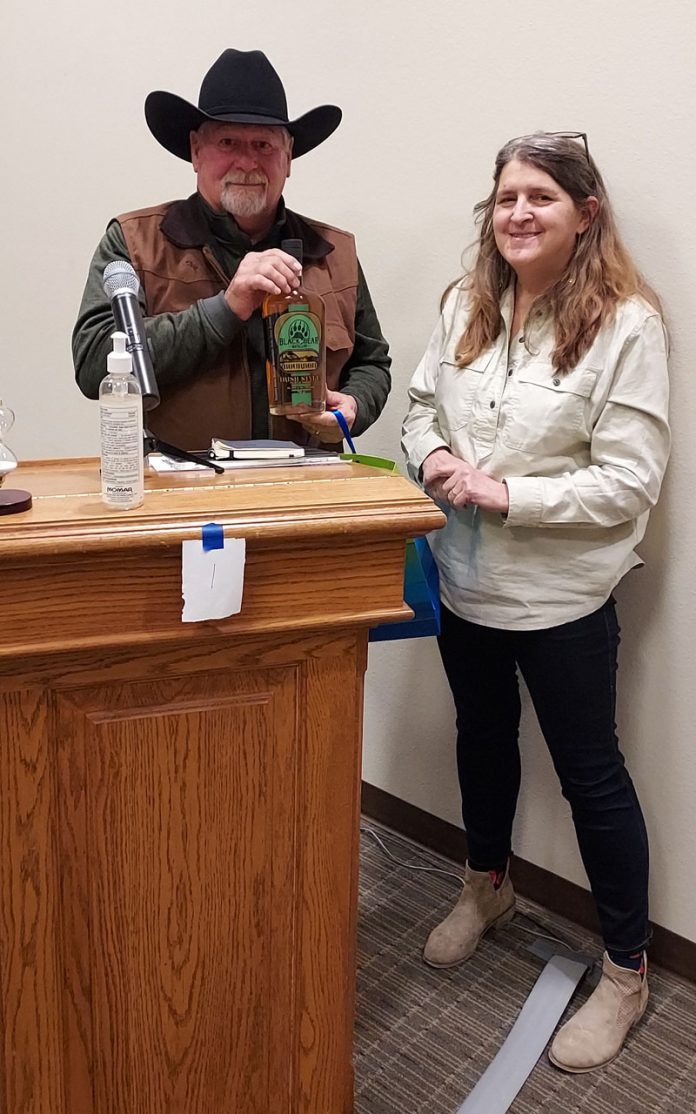 It was a time of emotional and grand farewells at last week’s GMF Board of Trustees meeting, but with one firm and somber message:  Stay the course with the town manager system of government.

Last week, Clay Brown, the retiring regional director of the state’s Department of Local Affairs (DOLA) bid farewell. Brown is considered the main catalyst in GMF’s ability to construct a nearly $1 million town hall facility, following an arson fire that wiped out their previous tiny municipal headquarters near the post office. He also  was the driving force in a state-promoted system that established a new town manager to run day-to-day operations and to move away from a trustee/liaison setup.  In fact, Brown helped to garner the state grant funds to get their town manager style of government off the ground.

And following Brown’s remarks, retiring Marshal Virgil Hodges joined the chorus, and put in a plug for the desperate need to stay on the town-manager path.

This style of government, which has been in place for the last five or so years, has sometimes generated considerable debate in local circles.  A proposed petition campaign may even set the stage for voters to eventually decide whether they want this position eliminated. This decision, if the effort moves forward, would probably have to take place during a  special or future election.

Brown told the trustees that much misunderstanding has occurred over the town manager experiment in GMF. He stated that GMF is a statutory town, and under this definition, the trustees and the mayor still call the shots regarding town government policies. But he stated officials in GMF, similar to most cities in Colorado, have opted for a town manager or administrator, who serve almost in the similar capacity of a chief executive officer of a company.

And with an explosion of regulations, Brown made it clear that this system needs to be reinforced. “The world has gotten complicated…It is craziness.” Moreover he cautioned that a local volunteer board (of trustees) “doesn’t have the time to learn the state statues.”

Protecting the Town From Lawsuits

And more importantly, he described the town manager as an important tool to protect the community from future liabilities and to serve as a buffer. Otherwise, he cited disastrous consequences. “You are going to land in court and get sued for a lot of things,” warned Brown. “I got my first job (as a city manager in Frazer, Colorado) because of a lawsuit,” quipped Brown, in describing a personnel matter that wasn’t handled property by the town’s elected leaders.

He said the town manager system is favored by DOLA, in an effort to try to “make Colorado communities successful.” He said this format really wasn’t contingent on the size or population of a designated town or city.

This has been a big complaint by some citizens in GMF, who believe the town is just too small to afford a town manager. They would rather  invest these dollars towards road improvements.

Brown outlined the program implemented in GMF, which funded the position over a four-year period, with the state footing the bill initially for 75 percent of the job costs, then lowering this to 50 percent, then to 25 and finally to zilch. “We want to make sure you stay with it,” said Brown.

He believes GMF has achieved this goal in garnering other revenue sources, such as an increase in the lodging and the overnight bed occupancy levy. “My hats off to all of you,” said Brown.

But he admits many hurdles remains, such as social media obstacles and a more hostile political climate.  “We have become uncivil at the local level. I have seen anything like this,” related Brown.

Recently, Becky Frank, was appointed as the new town manager, succeeding Angie Sprang, who served in this position for a little more than two years. This is the longest any town manager has held the position, since the new system was implemented in GMF.

Brown didn’t have to do much arm-twisting in convincing the trustees to stay the course, when it came to having a town manager.

“We have become more professional,” said Mayor Jane Newberry, in citing the advantages of having a town manager. She also noted that Brown was “instrumental in us getting this (town hall building.”  Besides his role with GMF, Brown played a big role in the infrastructure and main street improvements in Victor.

Trustee Margaret Peterson noted that the town now has the money to fully fund the town manager set-up, contrary to the claims of some town government critics.

Departing Marshal Virgil Hodges echoed similar sentiments. He cited the increase in reporting regulations as added proof that the town cannot function without a town manager.  Plus, he warned that the town may have to hire another part-time employee at the marshal’s office due to new state policies regarding the governing of law enforcement agencies. Similar to law officers from the region,  Hodges described the new reporting mandates as quite intensive for small communities, with regulations for officer body cameras and storing videos.

On the upside, Hodges said he couldn’t conclude his 45-year law enforcement career in a better place or with a better board. “I cannot think of a better way to end my career,” said Hodges.

This sentiment was shared by the board. “You took a chance on us,” said Newberry.