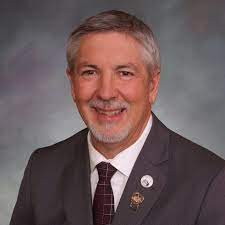 This first report from the Senate is a bit behind schedule, but it’s been that kind of a session so far. Opening day was pretty much as expected, speeches from leaders in both parties, first readings on a few bills to get committees to work, press conference and some finalizing of language by members on bills yet to be introduced.

Up early on day two it was immediately apparent that with a raging sore throat I should avoid human contact. Heading south I arrived home in time to attend the session virtually. The next 48 hours were mostly miserable as Omicron assailed me with an array of symptoms. With early treatment the turnaround was amazingly quick. Then it became a matter of following CDC guidelines to get back out in public.

Affordability and inflation being on voters’ minds, the Governor’s State of the State speech made is sound like he is wanting to postpone some of the fees his party passed last session until after the election this fall. And strangely enough, not defunding the police and arresting people that commit crimes has suddenly become a rallying point for legislators. Including those whose votes the past few years would make you question which side of that line they really stand on.

Early bills show the legislature will be wading into numerous tax issues, including one of mine that eliminates the tax on all food items. Multiple school and education bills are on tap. Of course, our voting system will warrant a few bills and one of our more unusual bills presumes we are wildlife biologists and qualified to put wildlife management decisions into law. Let’s not get those kinds of decisions locked in state law, let the true biologist with decades of data and experience set policy that can be modified as situations and populations change. All of this in the first 100 bills, can’t wait to see what the next 500 or so will bring

It’s a long road for every bill, three readings in each chamber, at least two committee hearings, no less than 33 votes in the House, 18 in the Senate and the signature of the Governor before a bill becomes a law. 33, 18 and 1, the magic formula we all live by until the gavel comes down on the Second Regular Session of the 73rd General Assembly, sometime in May

I welcome your thoughts and comments on the happenings here at the Capital. Lots of ways to stay in touch; Office phone: 303-866-4877, Mobile phone: 719-351-2121, Email: SenatorHisey@gmail.com, Twitter: @SenDennisHisey, Facebook: Senator Dennis Hisey