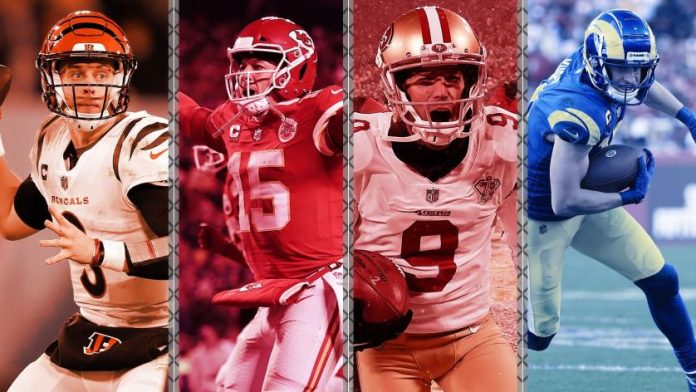 Another wild week of NFL action is now in the books, following the Division showdowns, leading to the Final Four

This Sunday will determine who will compete in Super Bowl 56.

The conference championship game in the NFC will be between the San Francisco 49ers and the Los Angeles Rams.

Just when it seemed like the Packers were about to win the game the 49ers’ Jordan Willis blocked a punt that was recovered and run in for a SF touchdown, tying the game at 10-10. After the Packers went three-and-out, the 49ers got the ball back at their 29 with 3:20 left and drove into field-goal range. Deebo Samuel delivered a 9-yard run on third-and-7 from the Green Bay 38, and the Forty-Niners ran down the clock to set up Gould. Gould was golden and hit the field-goal to send the 49ers to the NFC championship game.

This game was odd in a sense that the Packers drove right down the field on their first possession and it looked like the rout was on. 49ers Quarterback, Jimmy Garoppolo couldn’t seem to get anything going until halfway through the third quarter when he set up a field-goal for three points. It wasn’t until the fourth quarter that San Francisco got a touchdown, and that was on the blocked field-goal.

NFC Championship Prediction: I wouldn’t hold out much hope that the 49ers can beat the Rams in the championship game. Looks like the Rams will be in the big show come February 13.

The Los Angeles Rams held off a surge by the Tampa Bay Buccaneers to earn their spot in the NFC conference championship game. It was with no sadness to see that Buccaneer’s Quarterback Tom Brady will not be in the Super Bowl.

Tampa Bay erased a 27-3 deficit in the second half to tie the game at 27 with 42 seconds to go, only for the Rams to kick a game-winning field goal as time expired.

It is poetic justice that spurned ex-Bronco, Von Miller will be heading to the Super Bowl with the Rams. Miller pulled a rabbit out of his hat during the game when he strip-sacked Brady and the Rams recovered the fumble. It was a short lived celebration since on the next play the Bucs forced a fumble and recovered the ball leading to a Bucs touchdown. All for naught though since the final score was 30-27, Rams on a last second field-goal.

NFL fact: This is the first time in 12-years that a conference title game will not have either Aaron Rodgers or Tom Brady in it.

The conference game in the AFC will be between the Cincinnati Bengals and the Kansas City Chiefs.

The Bengals upset the Tennessee Titans to earn their spot in the AFC conference championship game.

The Bengals came out swinging against the Titans right from the start. Bengals’ Quarterback, Joe Burrow played like he had ice in his veins. He led scoring drives in all four-quarters, and when the game was on the line, he drove the team in the waning seconds to set up Rookie Evan McPherson who kicked a 52-yard field goal as time expired, lifting the fourth-seeded Bengals past the top-seeded Titans 19-16. This ended the NFL’s longest playoff skid in history.

The Titans hopes of having Derrick Henry man handle the Bengals’ defense never developed. Henry had just returned from a foot injury in time for this game, but the Bengal’s defense held Henry to one-touchdown and only 66-yards rushing.

The Chiefs beat the Buffalo Bills in overtime in what may have been the most exciting final-four playoff games ever played. It was a ping-pong match of ‘you score, then I score’ right up to the final 13-seconds when the Bills looked like they won the game. But Chief’s Quarterback, Patrick Mahomes showed how great he and the Chiefs are by driving for a game tying field-goal, with hardly any seconds left on the clock.  This sent the game into overtime with the score at 36-36. Mahomes drove the length of the field and hit Travis Kelse for the winning touchdown, 42-36.

AFC Championship Prediction: The match-up between the Chiefs and the Bengals next week will be a perfect match between two great teams. It’s hard to go against the favored Chiefs, but Joe Burrow is not to be taken lightly. This one could go either way.

The NFL Division Championship showdowns were quite exciting, definitely surpassing Wild Card week. Three of the four games were decided in the final seconds.