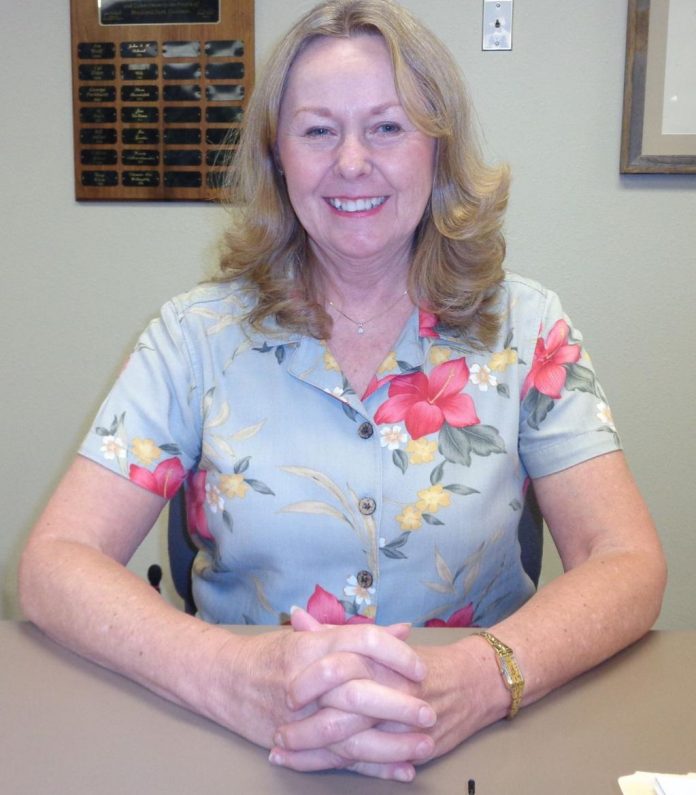 Riley was a fixture in the city government for nearly 37-years.

Before joining the city, Riley taught elementary school physical education in Plano, Texas for nine years and also taught at the University of Florida.

Riley came to Woodland Park in the mid 1980s and started working for the city as the parks and recreation director in 1985.

During a going away party in council chambers last Thursday, a virtual who’s who of past, and present city officials said goodbye to Riley.

City Manager Michael Lawson said Riley was a “tremendous asset” to the city. Planning Commissioner, Jon DeVaux held back tears as he recalled his dealings with Riley and said she was, “The best person to work for.” Former City Manager David Buttery checked in by phone and recalled memories of his interactions with Riley.

After being hired as planning director in 2007, Riley oversaw a number of city improvements, controversial projects, and major municipal projects. During her tenure, Riley saw the city through the building of Walmart, the Meadow Wood Sports Complex, two master plans, the renovation of Bergstrom Park, the establishment of the golf course, two devastating wildfires, a host of residential and commercial properties, the building of Cavalier Park, and the stabilization of Fountain Creek through that park.

One of the most memorable and colorful issues Riley confronted during her term as planning director dealt with the Chicken Man controversy. In 2008, Wild Wings “N Things restaurant in the Safeway shopping center hired someone to dress up in a chicken costume and stand on the edge of Hwy. 24, waving at motorists to try and drum up business for the restaurant. Chicken Man became a local hero to some, and a clown to others, who thought the display was in bad taste.

This Chicken Man squabble kicked off the city’s overhaul of its sign code, which generated a huge fight.

Denver Post Business Columnist, Al Lewis says the city’s code enforcer had called Chicken Man a safety hazard on the side of U.S. Hwy. 24,  with complaints about the fowl-clad restaurant employee tainting the town’s image. At the time the city claimed there was no specific ordinance that prohibited Chicken Man from performing his job.

Mike Morris, founder of Wild Wings ‘N Things said, “We use him as an ambassador of goodwill. He does school (fundraising) drives, gives to the needy and shows up at nonprofit events. The kids stop and get their pictures taken,” he said. “People honk their horns and wave. It’s just a whole lot of fun. Why would somebody want to stop that?”

Chicken Man was also a powerful symbol of freedom. In a town of fewer than 8,000 people, a petition collected more than 1,100 signatures in support of the bird. “The chicken has got to stay,” cried Dan Archer, a small-business owner. “The chicken is freedom of speech.”

During a heated debate at a planning commission meeting on the subject, several mascots dressed in costumes attended in support of Chicken Man and the fur flew. Liberty Tax Service of Pueblo even sent eight of its Statue of Liberty mascots to Woodland Park in support of the bird.

Riley presented proposed revisions to the city’s sign ordinance, one of which would expressly limit the use of costumed characters like Chicken Man to 90 days a year and would require a permit. Eventually, the Chicken Man’s appearance on Hwy. 24 screeched to a near halt.

This is just one of the many conflicts Riley referred during her time as the city’s planning chief.

She also worked under a slew of different city managers with her roles as the head planning chief and park and recreation director. In the process, she dealt with a variety of city councils.