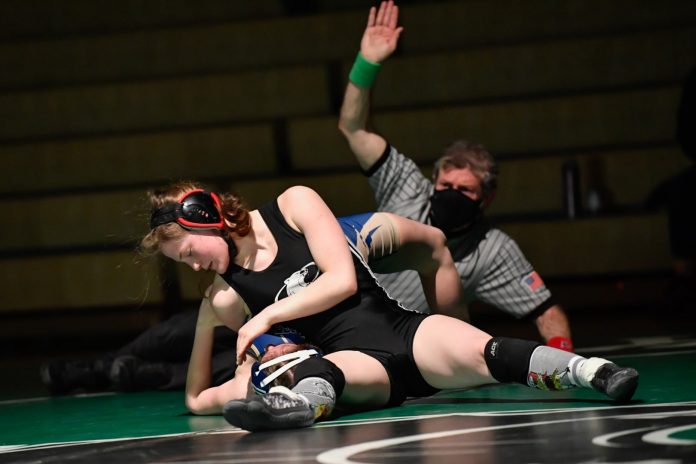 When people think about high school wrestling, they mainly just picture boys squaring off against each other.

However, today this is not the case as female wrestling has surged over the last few years.

This trend has definitely taken off in Woodland Park and isn’t just restricted to girls having to take on the boys, if they want to compete in this growing sport.

Last year was the first wrestling season where girls could hit the mats and grapple against other females. The change in the CHSAA (Colorado High School Activities Association) rules opened up the sport to more competitors as parents are more comfortable with their daughters wrestling other girls, instead of boys.

For the ’21-’22 season, the girls have already hit the mats with renewed vigor.  And their season has been going quite well, based on preliminary reports.

The main obstacle confronting the girls’ team is the COVID-19 epidemic and not enough grapplers.

According to the girls’ wrestling coach, Dustin Rodriguez, the team has had to cancel some of their meets this year due to teams not having enough participants. Some of their matches have also been cancelled due to the competitors testing positive for COVID-19.

However, even though the Lady Panthers have not had as much time on the mats as their male counterparts, they are still having a successful season. The girls’ team this year consists of six wrestlers. Out of this lineup, three are new to the sport, while the other three are seasoned veterans.

The team’s most experienced captain, Trinity Diamond, has been wrestling since she was in middle school in Rodriguez’s junior wrestling club. She qualified for state in her freshman year, but then during her sophomore year last year, the state championships were not held due to the pandemic.

The coach said that he has high hopes that Diamond (his most experienced female grappler) will place in the state championships this season. He said that he has already had several colleges looking at giving Diamond college scholarships for wrestling.

So far this year, the girls have only wrestled in one high school tournament but they have gone to Rocky Mountain National Tournaments with their junior wrestling club team. The coach said that all three of his veteran wrestlers have placed in some of the tourneys.

Diamond has placed in a few of the tournaments as well as wrestlers Susie Elderbaum and Arial Johns, who have also appeared at the podium. Johns succeeded in  placing at the high school tournament they competed in earlier in the season.

The girls competed last weekend and then they will prepare for the regionals on February 11. Those that do well will then move on to compete in the state championships.

Rodriguez said that there are improvements the team could make, especially with the three new wrestlers. “The girls don’t lack technique or skill by any means,” the girls’ wrestling coach said. “They have been working on that for quite a while and you can see that the skill sets are there. A lot of these girls just need to have some confidence boosters in themselves. They need to work on their head game a little bit. Some of them are letting it get to their heads and it’s affecting them on the mats.”

Rodriguez is also the coach for the local junior wrestling club team that has a tournament every weekend. He said that before the pandemic struck, the club boasted a participation rate of more than 40 kids from ages 4 to 18.

Now the team has about 20 wrestlers and many of them have been wrestling since they were four-years-old. Several of the current high school male wrestlers started out on the club team, including star grapplers Adam and Eli Garner.

The club was started by former high school wrestling coach Keith Sieracki in 2014. When Sieracki left in 2018, Rodriguez started a new club to keep the kids on the mats.

Wrestlers in the area have the chance to start learning the sport at the age of four and then they can continue in the club team throughout high school. Many of the wrestlers become stars while they are in middle school and stay with the sport through high school.

In the last several years, female wrestling has grown due to female mixed martial arts (MMA) competitions becoming more popular. Colleges now give out many scholarships to high school female wrestlers each year and many move on to having careers in MMA when they are adults.