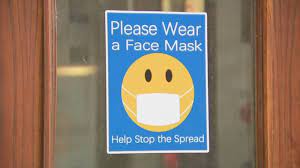 As new cases of COVID-19 surge across the county, the Woodland Park city government has taken a big  hit.

In order to squash the spread of the disease, Woodland Park City Manager Michael Lawson recently implemented a mask mandate for all city facilities. And last week, the city council stood behind  his decision, making Woodland Park the only governmental entity in Teller to renew mandatory mask rules, regulations that were commonly in place in 2020 at the early stages of the pandemic.

Lawson sent out an email earlier this month, saying that employees and guests must wear masks when they are inside any city building. Once the mandate was imposed, two council members decided to draft a resolution opposing the mandate.

But last Thursday evening and early Friday morning in a marathon meeting, the resolution was voted down by the majority city council members,  keeping the mask mandate in place.

The resolution was brought up during the Jan. 20 meeting and it generated a lot of debate. In fact, the topic didn’t come up until the end of the session and about half a dozen people spoke during public comment, occurring after the  midnight hour. The meeting didn’t end until close to 2 a.m., marking the longest session in years.

According to council members Robert Zuluaga and Stefanie Alfieri, the purpose of drafting the resolution was to protect the constitutional rights of the citizens. The two also questioned whether Lawson had the authority to implement the mandates.

However, newly-appointed Woodland Park Mayor Hilary LaBarre had a different take on the issue. “I appreciate both of your positions because I agree with you. I don’t like masks,” the mayor said. “I don’t want to wear a mask and I don’t want to be told to wear a mask. But the rules within the charter say that Michael (Lawson) has the authority to direct his employees. And, he has the authority to direct for health and safety.”

The city manager then took the floor to explain why he put the mask mandate in place. “This decision wasn’t fun or easy, it actually came at a point of some desperation,” Lawson said. “That day we imposed the mandate we ended up having to send six people home due to COVID.”

He said that the next week they had to send nine people home who tested positive for the disease. He told the council that he feared city services could take a hit if he didn’t take action to mitigate the spread of the disease. He added that four of the people he had to send home in the last two weeks were police officers.

Councilmembers Catherine Nakai, Rusty Neal, and Mayor Pro Tem Kellie Case all agreed that they opposed the anti-mask resolution. They noted this went against the city charter, and would interfere with how the city manager handles his workplace.

During public comment, several people spoke out against the mask mandates. Two residents brought up a story of a 15-year-old old lifeguard at the aquatic center.

After the lengthy public comment session that extended past 1 a.m., LaBarre took the floor again and said that she didn’t even want to bring the resolution to a vote. She said that passing a resolution was not the appropriate way to provide oversight to the city manager.

“To sign a resolution is to take a vote against the authority that he has been granted, which is a violation of our charter by us,” LaBarre explained. “If you take issue with something the city manager is doing, an executive session is where you can raise the issue. I don’t really recommend that you slap him on the hand in public. I don’t think it is very professional and that it is better to discuss the issue with him privately.”

After debate ensued regarding this issue, Mayor Pro Tem Kellie Case asked that the resolution be put to vote. The resolution then failed 4-2 with Alfieri and Zuluaga being the only members who voted “yes.”

As a result, the city’s mask mandate continues, but Lawson said that he will remove the signs from the city hall doors.

By comparison, both the city of Cripple  Creek, the Teller County government and the Woodland park RE-2 School District have also experienced recent staff shortages from the COVID-19 epidemic, as have  many businesses.  Officials in Cripple Creek  and Teller County have encouraged their employees to get vaccinated and to use proper health safety precautions, but have refrained from adopting mask mandates.

During their public meetings, which feature a good number of in-person participation, most attendees are not garbed in protective masks.

The recent record spike in cases, though, has impacted overall commerce, the business community and even church services. The Church in the Wildwood in Green Mountain Falls recently announced plans to shut down its spacious facility due to the number of positive cases locally, and to feature services online, similar to the early days of the pandemic.