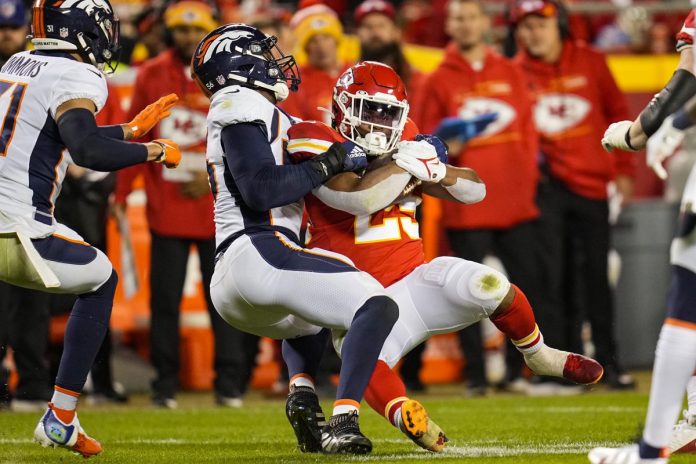 This is it Bronco fans. The last game of a season that held such high hopes, and is ending in bitter disappointment.

After last week’s butt kicking by the Los Angles Chargers, 13-34, the Broncos will be facing the Division Leader, Kansas City Chiefs, Saturday at 3:30 p.m. (a change due to the NFL flex scheduling)  in Denver.  The game is also scheduled for a national TV broadcast on ABC and ESPN.

The Broncos won the first match up with the Chargers in Denver (week 12), 28-13. Fate had dealt the Broncos another blow, just days before the Charger game. Sixteen players, including 10 Bronco starters, were scrubbed from the game due to the COVID-19 NFL protocol.

Denver Quarterback Drew Lock played one of his better games, but the offense still couldn’t find a way to take advantage of opportunity. Twice they were goal to go inside the five-yard line. One ended on a turn over on downs. Offensive Coordinator, Pat Shurmur decided to pull a little razzle dazzle trick play out of his bag of left over, past the expiration date, Halloween candy and it failed miserably.

The second was killed by an “illegal formation” penalty that forced the Broncos into a long fourth down conversion attempt that failed. Losing those possible 14-points could have sparked a momentum and confidence shift that could have led to victory.

The Chiefs come to town Saturday for a game that means much more to the Chiefs than the Broncos. The Chiefs have already clinched the AFC West, but they are tied (11-5) with the Tennessee Titans for the number one seed in the AFC. The number one seed gets home field advantage throughout the playoffs, as well as, a first round bye.

The Chiefs beat the Broncos in their first meet this season 22-9, in Kansas City. If fact the Chiefs have beaten the Broncos 12 consecutive times.

After blowing a chance to clinch the number one seed last week by losing to the Cincinnati Bengals, 31-34, the Chiefs will be coming at the Broncos like it IS a playoff game. With the playoff picture that has been developing over the last several weeks, it looked like the Chiefs would have clinched the number one seed earlier. If they had succeeded with that, there existed the possibility they may be resting their star players on Jan. 8. Bad news for the Broncos.

Unless Patrick Mahomes, Travis Kelce, Tyreek Hill, and Andy Reed come down with COVID 19,(which I don’t hope happens), the stars align in some cosmic possession of Drew Lock by the spirits of John Elway and Peyton Manning the Broncos don’t stand a chance in this one.

As a long-time Bronco fan, I’d like nothing better than to see the Broncos keep the Chiefs from getting that number one seed in the AFC.