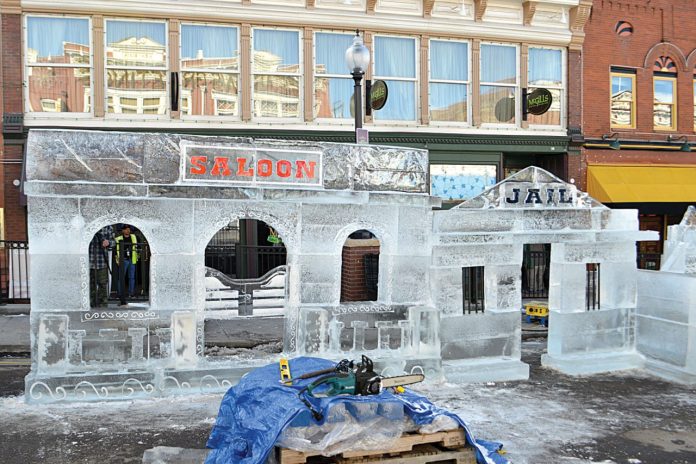 For the second year in a row, the area’s most  popular winter festival has hit a deep freeze, icing the prospects of the main street in Cripple Creek getting adorned with acclaimed sculptures and a slew of games for two weekends

The Cripple Creek Ice Festival, voted as one of the best special events in contests in TMJ News and  lauded by business owners, casino operators and residents, won’t occur this winter.  The two-week festival would have occurred from February 5-13. It would have marked the 14th annual Ice celebration.

The expected “no Ice Fest for 2022,” was made official recently by city officials and event organizers.

In 2021, the event was frozen by the coronavirus epidemic and the associated restrictions.

Now, the main hurdle is the city of Cripple Creek’s  new special events’ policy that has put  a freeze on all sponsorship dollars for major festivals, except for a few small celebrations and the city’s Independence Day event.

The Ice Fest is one of the preliminary victims of this fiscal decision that opted for the city to no longer play the role as a sponsor for special festivities, which also includes Donkey Derby Days, the Salute to American  Veterans Rally, the Fall Fest and more.  The city will only help with such services as trash, sanitation services and traffic control, and possibly with marketing assistance.

This was one of the key fiscal changes made during the council budget discussions in late 2021, and followed suit with actions taken in 2021, when the city moved away from special event funding due to the pandemic restrictions.

The new financial move, though, has stirred mixed opinions, and many are upset about the cancellation of the Ice Fest, based on social media reports.

The organization leaders announced the decision in a matter of fact manner. “The organizers of the Cripple Creek Ice Festival have reluctantly made the decision to cancel the 2022 event previously scheduled for February 5-13. Due to limited sponsorship dollars and changes in this the city’s special event funding policy, the organizers have determined that it isn’t financially viable to host the event this year.  It is our hope that future funding opportunities will allow them to bring the event back in 2023.”

Unfortunately, the city was the title sponsor for the Ice Fest that attracted close to 50,000 visitors for two weekends. In the past, the city invested $50,000-plus annually and jointly participated with several large casinos in sponsoring the festival.

The Ice Fest got so big that the festival was recognized as one of the  premiere winter events in Colorado by state and tourist-related media outlets.   And unlike some special largescale festivals in Cripple Creek, the Ice Fest enjoyed enormous universal support from business owners, residents and visitors.

Even businesses in nearby communities welcomed the Ice Fest with open arms. Tracy McGinty, proprietor of McGinty’s Wood Oven Pub in Divide, lauded the festival as one of the best  weekend periods for their restaurant in the winter time.

Business operators from the region have expressed much disappointment over the event cancellation.

However, the formal cancellation wasn’t a big surprise.

When the city opted for a new special events’ policy, the guillotine blade was sharpened for axing the festival this year.  Jeff Mosher, special projects director, told the council that when they made the change in handling special events, this could kill the Ice Fest for 2022.

The fate of several other regular events  is still  unclear. City officials, though, maintain they still are open to hosting special events, but not as a sponsor.

For years, the city played a major role in organizing and orchestrating special events throughout the year, and the term “Summer of Fun,” was dubbed as a nickname for the town’s active pursuit in trying to make Cripple Creek  more family-friendly by offering a huge lineup of unique festivals. But city leaders contend the pandemic has changed this approach, with the town suffering a huge loss in revenue and staffing employees now ranking as the major community issue (see related story) southern Teller.

Plus, city leaders say they didn’t want to get in the position of picking winners and losers, when it came to funding events.

Many locals, though, disagree with this stance and contend the city is sending the wrong message by no longer sponsoring events.