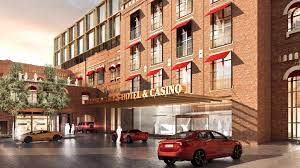 Proponents of the most ambitious casino hotel/resort bid in Cripple Creek have received a little more time to complete their project.

Last week, the council approved several ordinances that have extended the deadline for Full House Resorts, the owner of Bronco Billy’s, to finish the  much touted Chamonix Resort, including a 300-plus-room four-star hotel and parking garage.

A key part of this development hinged on the city’s relinquishing of several public street right-of-way areas, namely a key part of Second Street and an adjacent alleyway.

Previously, the developers faced a Dec. 31, 2022 deadline, in order to obtain these vacated street conditions and comply with other aspects of an agreement with the city.

But last week, the council, at the developer’s request, extended the deadline until July 15, 2023. The main reasons cited for extra time dealt with construction delays and related cost increases.

The council expressed no objections to the extension, as work is continuing full-speed ahead on the massive, $100 million-plus project, the most extensive hotel expansion done in Cripple Creek’s post-gaming era. The sight of towering cranes, looming over the historic district, have become a familiar sight and proof that the town is bracing itself for a new era of hotel expansion.

Interim City Administrator Ray White has remained optimistic about the project and notes that the development is moving ahead on schedule.

During the outbreak of the pandemic, when casinos were closed nationwide, this project, approved in 2018 appeared to face a death-row status. Also, a good portion of their performance bond was returned, at the developer’s request.

Then in late November 2020, Dan Lee, chief executive officer of Full House Resorts, reassured the council that the project was indeed alive and well and announced their intention of having more hotel rooms than originally proposed. He also cited a more favorable economic climate with Colorado and Cripple Creek voters’ decision to end all betting limits and with the reopening of casinos in Cripple Creek and across the country.

Several months later, the revived plans, which mainly called for 300-plus hotel rooms, got the green light and a previous development agreement was amended. Under the new development focus, the project will not occur in stages as originally proposed, and will get completed at the same time.

The Chamonix resort also calls for a spa and many amenities, fine dining, retail and a huge parking garage.

During last week’s meeting, no comments were made by Lee or any other officials from Bronco Billy’s.

In other Cripple Creek news, it was announced that the city has received some good applicants for the newly-open position of the Butte Theater director, previously held by Mel Moser.

In addition, White said Moser has agreed to stay on a little longer to help make the transition.