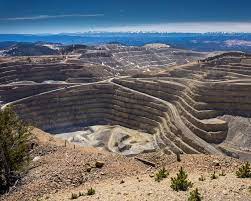 One of Teller County’s largest employers, the Cripple Creek & Victor Gold Mine Company, has received the county go-ahead for an extended lifeline package that will permit the highly visible Cresson operation to continue until at least 2031.

Moreover, the mine, owned by the Newmont Corporation, the largest gold producer in the world, is not slated for final closure and reclamation for several more decades. The new Amendment 13 agreement also sets the stage for an expanded leach operation, giving  CC&V an additional 204 acres of leach field capacity, allowing it to handle an additional 107 million tons.

The Teller County commissioners approved the request at their meeting last week with few questions or concerns. About the only issue dealt with future impacts on wildlife in the area with a protective fence.

In fact, the commissioners heavily supported CC&V’s continued operation and their involvement in the community.

“Thank you for being a good neighbor,” said Teller County Commission Vice-chairman Dan Williams .”That is your private property.”

Commission Chairman Bob Campbell classified CC&V’s request as fairly straight-forward and absent of the controversy that sometimes greeted CC&V’s earlier expansion bids. A number of years ago, a huge furor development over a bid near Cripple Creek’s Poverty Gulch area and the elimination of acres of aspen trees; but most CC&V bids have received strong community support. The mining near Cripple Creek now has received few officials complaints.

Many local residents in the Cripple Creek/Victor district are excited about the prospects of an underground operation occurring in the near future.

The request also was heavily endorsed by  Cripple Creek Mayor Milford Ashworth. “It is important to the community,” said Ashworth. “They support a lot of civic projects. All of Teller County will benefit. You guys are good partners.”

The commissioners, along with Assessor Colt Simmons, stood behind these comments.

Under the plan, which has already received the approval of a few other agencies, the CC&V mining operation is not slated for a full closure until 2050. This marks an eight-year extension from earlier agreements.

The action last week puts the final stamp of approval of a proposal that has been in the works for some time.

Amendment 13 is mostly a technical measure that doesn’t call for any additional traffic or mining activity, according to Katie Blake, CC&V’s Interim Sustainability  Manager.

The thrust of CC&V’s current operation, outside of Cripple Creek and in other parts of the district, have already received the green light and are in full stride.

In other county government news, the commissioners signed off last week on a new emergency operations plan that sets the wheels in motion for official responses to a slew of natural disasters, covering the gamut from earthquakes and devastating fires to pandemics and unforeseen catastrophes.

The plan, mostly compiled by the county’s office of emergency management, was lauded last week by Administrator Sheryl Decker. “The plan was exceptionally proposed,” said Decker.

It also could facilitate efforts by the county to snag funding dollars from the Federal Emergency Management Agency (FEMA).

Also last week, the Teller County Sheriff’s Department  conducted an awards ceremony and recognized a number of officers who played a key role in preventing self-inflicted deaths at the jail. Others were recognized for their service.

Officers given life-saving awards were: Alan Arendt, Travis Davidson, Audra Pflug and Alex Salmons. The ceremony also recognized Dispatcher Shannon Gomez and Dispatch Supervisor Jessica Flohrs for their service during some trying times.  With the advent of the coronavirus pandemic, calls to the sheriff’s office have exploded in the last two  years.

In addition, the ceremony concluded with official promotions to the corporal level for Marcus Woodward, who previously served as the agency’s undersheriff, and Kara Wright. An official swearing-in ceremony was conducted for the new sheriff department corporals.