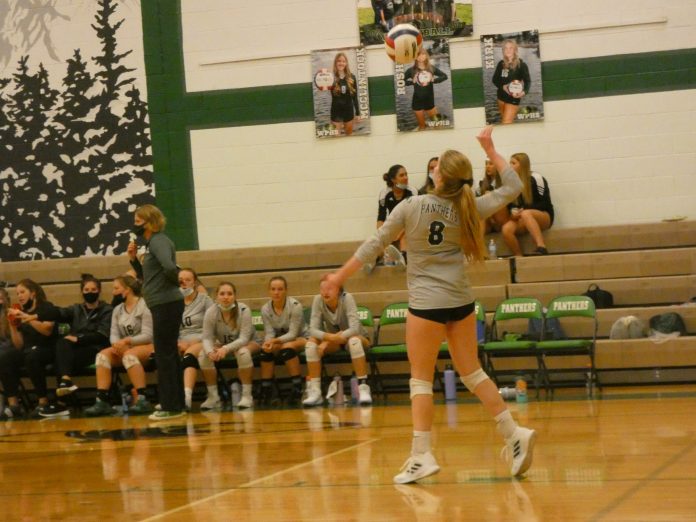 During the 2021 season, the Woodland Park High School girls’ volleyball team finished with a bang and took home the first place trophy in their league once again.

On Nov. 6, the team went to the northern part of the state to play in the regional tournament against Thompson Valley and Golden.

Unfortunately, even though the girls seemed prepared and played tough, they lost to both teams during the tournament. This meant that the ladies’ season came to a conclusion and they did not qualify to play in the state tournament.

But the team can still view their season as a success since they were undefeated in league play and took first place in the 4A/5A Colorado Springs Metro South League.

The ladies finished their season 6-0 during league play, but they only earned an overall record of 14-11. But according to Stacy Roshek, the team’s head coach ,  their overall record was worse than their league record for a good reason.

She said that in the first part of the season the girls played many top ranking teams from across the state that were not in their league. “I planned that on purpose so we would have a little better competition throughout our season,” Roshek said. “In the past, we have had a pretty easy schedule and our league is pretty weak. So, when we get to regionals’ (tournament), we kind of struggle a little bit because it’s tougher competition.”

However, Roshek said that many of the team’s non-league losses were from highly ranked teams across the state. Despite their latest loss at regionals the coach said she likes many aspects of the team’s play.

One major aspect Roshek said contributed to their success this year was their experience as a team. “A lot of them have been playing together for a couple of years now,” the team’s coach said. “A lot of them are sophomores and juniors and I think that is a big part of it. The team chemistry is coming along really nice and we hit our groove toward the end of the season. The latter part of the season we really started picking up steam and played really well.”

Looking at the statistics, many of the team members put up some good numbers in 2021. When it came to attacking for the season, Junior Kyra Kidd dominated with 187 kills. Senior Grace McClintock was next best with 173 kills and junior Kayla Stimits was right behind the two with 139.

Kidd also led the team in blocks by picking up a total of 45. Junior Ava Lukasavige also came in clutch on defense with 23 blocks in 2021.

The team’s libero, Roshek, was also the team’s best at digging as she racked up 437 during the season. The next best players at digs on the team were McClintock with 133 and Roskam with 127.

Next year, the volleyball team should once again be a force to reckon with as many of their players will be returning. Out of the nine players on the team’s starting roster, only three seniors will be leaving in spring due to graduation.