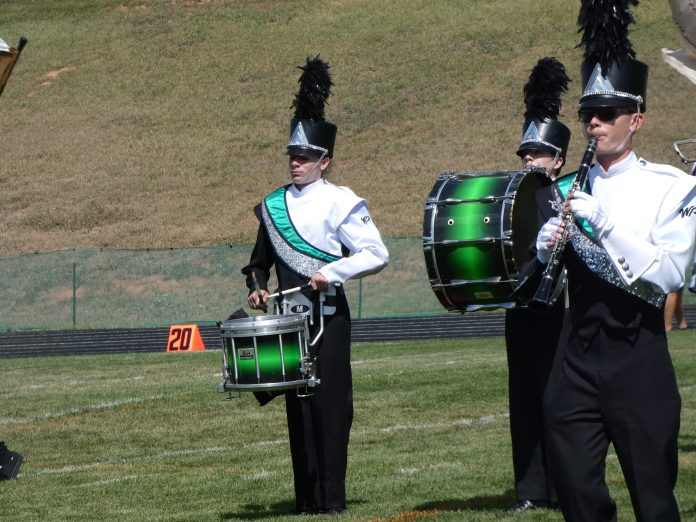 During the Woodland Park High School football games last season, the crowds were big and the entertainment offered was top-notch.

The marching band played at home games and they hit the 2021 season with a new sound. The cheerleaders also appeared extra-impressive this year, as all of their flips and gymnastic stunts were seriously on point.

Towards the end of the season, it was realized that, the fans in the stands were not the only ones that recognized the awesomeness of their student entertainers. The judges of key marching band and cheerleading competitions also apparently appreciated the talent of the WPHS students.

The marching band was also recognized in 2021 as they qualified for the state championship competition for the first time in several years. On Nov. 1, the band competed at the state finals and they grabbed a spot in the top 10 by finishing in eighth place. The judges gave the band a score of 63.2, which was only three points away from the band making it to the finals.

The group was led by the high school’s band and choir director Jeffrey Hemingson. Even though this is Hemingson’s second year as a teacher at the school, there was no marching band last year due to the pandemic. This was Hemingson’s first year as head of the band. He succeeded in achieving an accomplishment that hasn’t occurred for Woodland Park since 2014 by qualifying for the state finals.

The band director said that the students this year came back after taking a year off and were ready to get back into it. “From day one, the kids were talking about how much progress they made and they all had outstanding attitudes,” Hemingson said. “Any time we asked something of them, they just did it right away. We talked about things to fix and they fixed them. So, everybody was super dedicated and really wanted to be there.”

However, Hemingson said the students didn’t necessarily get better at playing their instruments while being stuck at home. He said that actually the opposite happened because the musicians were not able to practice as a band.

“Overwhelmingly, it’s happened with bands and choirs across the state,” the band director said. “With COVID and everyone having to do music remote last year, everyone took a huge step back. Musically everyone is lower than they should be. Playing by yourself will only get you so far.”

“The music that we did was accessible to the kids,” Hemingson said. “It was stuff that was right in their wheel house. As far as their ability level goes it was right there with what they were comfortable doing. It was a little bit of a stretch, but it was stuff they enjoyed.”

Hemingson said that another song they played, “Ghost Riders in the Sky,” was one that meant a lot to him. He said it was his favorite song that he played when he was in the marching band in high school over a decade ago.

“When I got here last year, I looked in the library and we still had the music,” Hemingson said. “And, unfortunately the music is now out of print. So, you can’t get that song anymore, it’s just gone. So, we’re pretty lucky to have that music.”

The band director said that the band was focused on going to the state championship all year long. In the end, he said that he was proud they were able to accomplish their goal and place in the top 10 statewide.