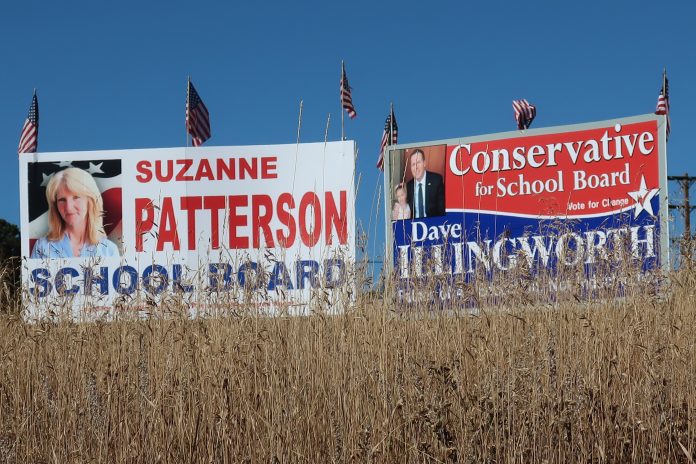 Leaders of the Teller County Republican Party won big on election night Nov. 2, as a slate of four conservative candidates, heavily backed by the local GOP, emerged as the victors of the highly contested Woodland Park RE-2 School Board races, based on unofficial results.

These included Republican contenders David Rusterholtz, David Illingworth, Gary Brovetto and Suzanne Patterson. The RE-2 election winners campaigned on the issues of giving parents more of a say in the running of RE-2 District affairs, and even suggested a structural change with the school board itself. Another big issue of focus dealt with the declining enrollment numbers of the RE-2 District.

Out of these competitive races, the only close contest involved the showdown for District D between Brovetto and Paula Levy. As of late Tuesday night, Brovetto was ahead by only 200 tallies.

The respective victory of the GOP-backed candidates was part of a national trend, in what became a winning night for Republican candidates nationwide. School board races in Colorado have attracted much more attention than in the past, with such issues as parental choice, COVID mandates and academic focus changes taking center stage. Some school board meeting in parts of Colorado have gotten extremely heated and nearly resulted in fist fights in certain locales, with law officers forced to intervene.

This hasn’t occurred in Teller County.

In fact, school district officials have already issued a statement congratulating the newly-elected board members.

“It is my honor to welcome this group of exceptional community leaders who have been elected to our District’s Board of Education,” said Dr. Mathew Neal, Superintendent, Woodland Park School District Re-2.

“We are inspired by the dedication of our community members to select individuals that will certainly provide a great deal of valuable insight, healthy curiosity, and a level of collaboration that will continue our district’s tradition of innovation and leadership. I look forward to collaborating with our new Board to discover new opportunities in the years to come,” he added.

In southern Teller, voters appeared to mostly favor the experienced candidates, with Melissa Trenary winning for another term on the city council, snagging 62 percent of the tallies, in the race for Ward Five against Les Batson. And for the RE-1 School Board, voters picked Mary Bielz, Stanley Conley and Donna Brazill to three elected at-large seats. These RE-1 winners are well-known figures in the district. Still this featured one of the more competitive RE-1 races.

However, in the race for mayor in Victor, Brandon Gray was comfortably ahead of incumbent Bruce Davis by a 69 to 31 percent margin.

Teller voters, though, had mixed views on the ballot issues. They soundly defeating a proposal for an additional marijuana tax with the money going to out-of-school learning opportunities, but supported proposition calling for changes in reducing property tax revenue and another state issue aimed at putting more restrictions on money dispersed by the state treasury.

But the big fiscal winners were leaders of a push for a slight tax increase for the Four Mile Fire Protection District, with nearly 70 percent of the electors favoring this $185,000 annual hike in money.

Altogether, close to 50 percent of active voters participated in the 2021 election in Teller County, which is considerably higher than expected, based on the early submittal of ballots.

For more election coverage, see this week’s issue of TMJ News and visit us on www.mountainjackpot.com. and on Facebook.