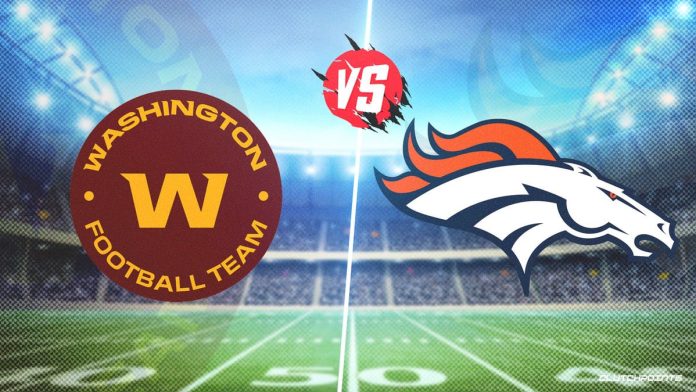 This Sunday, the Washington Football team invades Empower Field to take on the struggling Denver Broncos.

This is the second time in a row that the Broncos face a team with the same record (3-4).

Last week the Broncos were demoralized by the run game of the Cleveland Browns on Thursday Night Football, 14-17.

The Broncos are now struggling in all phases of the game. In week six, the Bronco’s offensive line was man handled by the Las Vegas Raiders. Against the Browns, the defense was man handled. The Broncos gave up a season high 184-yards rushing to the Browns including 146-yards to D’Ernest Johnson.

To add insult to injury, the defense also gave up 201-yards through the air to the Browns. That’s a total of 347-yards allowed. What was touted before the season as possibly the best secondary in the NFL, the Bronco secondary has been burned by the long ball more times than toast. It was obvious the Browns studied film on the Bronco’s before the game Thursday. In the passing game the Browns went deep early and often. The Broncos are now last in the NFL in completions over 20-yards by an opposing team. The Bronco defense is the highest paid defense in the NFL. This is unacceptable.

Washington was beaten be the Green Bay Packers last Sunday, 24-10. In many respects, Washington is a mirror image of the Broncos. They struggle on third down, average six-yards per pass play, and four- yards per carry in the rushing attack. They are also evenly matched in scoring, with each team averaging 20-points per game.

Washington’s Quarterback Taylor Heinicke is pretty much even with Denver’s Teddy Bridgewater in the stats’ department. Heinicke hasn’t thrown more than two touchdowns in a game with the exception of a three touchdown performance against the Atlanta Falcons. Bridgewater has done the same. Heinicke has thrown six interceptions this year, compared to Bridgewater’s five picks. Very slight advantage Broncos. Heinicke’s quarterback rating average is 77.8, Bridgewater’s is 122.9. Advantage Bridgewater.

On defense, Washington has sacked opposing quarterbacks twelve times, and their leading sack master is Montez Sweat with three sacks. The Broncos have accumulated 14.5 sacks, 4.5 of which belong to Von Miller.

Unfortunately, Miller suffered an ankle sprain last Thursday night and his status is unclear at this time.

And therein lies a major problem with the Bronco defense; INJURIES!!! The Broncos lost inside linebackers Josey Jewell and Alexander Johnson for the season. Linebackers, Natrez Patrick, Jonas Griffith, Baron Browning, and Andre Mintze are also on injured reserve. Outside Linebacker Bradley Chubb has miss much of the season with an ankle injury, but is expected to return for the Washington game.

You can bet Washington has also been watching tape on the Broncos. Their biggest decision will be whether to attack the Broncos poor run defense, or throw the bomb to their leading receivers, Terry McLaurin and J.D. McKissic. My guess is they will do both keeping the Bronco defense back on their heels trying to figure out where the next big play is going to come from.

The GOOD news for the Broncos: Wide Receiver, Jerry Jeudy and Bradley Chubb are both expected to be back on the field Sunday. With the return of Chubb and Jeudy, plus home field advantage, this one SHOULD go to the Broncos.

Game time for the Oct. 31 Halloween game is 2:25 p.m.,  a great time for a hearty meal, a drink or two and a hopeful Bronco victory. Beverages of choice may be a requirement for future Bronco viewing, based on the last four weeks. Maybe, week eight will break the losing tide.

Once again, this home contest should provide quite a slug match, as both Denver and Sunday’s opponent, the Washington team, formerly known as the Redskins (Sorry, politically correct buffs, they are always the Redskins in our book), are struggling after fairly optimistic pre-season prospects for both teams.

For local Broncos and NFL viewing options, check out McGinty’s Wood Oven Pub, in Divide, the Center of the Known Universe, the sponsor of this year’s Broncos preview columns.  McGinty’s showcases all NFL games  Plenty of drink and food specials abound, and you can’t beat the atmosphere.

For extra pigskin predictions, check out the choices of TMJ sportswriter and Community Celebrity Trevor Phipps. And due to popular demand, we now feature the predictions of the infamous “Philly Joe,” one of the High Country’s more charismatic characters, and a staunch Philadelphia Eagles fans (Everyone has their weaknesses.) Disagree with Joe on any of his picks, and you can probably discuss your views with him at McGinty’s.

These picks can  be viewed every week by visiting www.mountainjackpot.com and our Facebook page, and if space provides, in our printed editions.

Stay tuned and enjoy the Broncos game and other exciting sports action at McGinty’s, including NHL games.