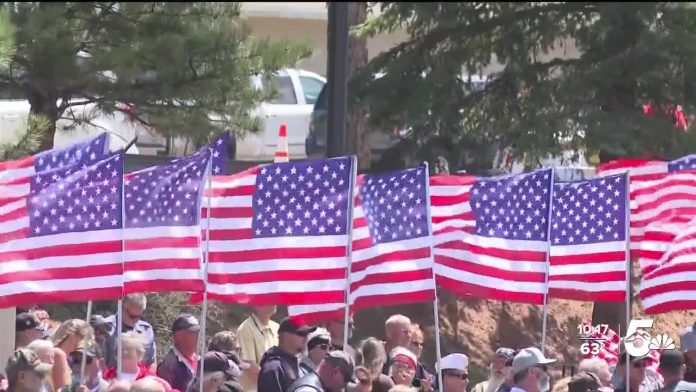 During the last week’s Woodland Park City Council meeting, the hot topic was raised regarding  the future of the Salute to American Veterans Rally.

Despite the event’s success last summer, Jim Wear, president of ProPromotions, which has organized the festival for nearly 30 years,  approached council to discuss the needs of the Rally organizers.

The issue was put on the agenda in the 11th hour as just a discussion.

Wear brought up multiple concerns about keeping the event in Woodland Park.  However, since it was just a discussion item, no decisions were made.

The event’s prospects of returning to Cripple Creek, the host Salute Rally  community for decades, encountered a setback last week, as the CC City Council decided not to sponsor any special events for 2022, other than their July 4th celebration, Toys for Tots and a Memorial Wall dedication (see related story). This budget action could kill Wear’s prospects of trying to return the event to the original  hosting site.

It’s not certain if this action, made at a budget meeting in Cripple Creek last week, influenced Wear’s decision to increase his lobbying efforts with Woodland  Park elected leaders. Wear had made a special event request in Cripple Creek for close to $40,000 in funding for 2022. This request now has little chance of getting approved by the Cripple Creek City Council, based on their budget moves.

Wear’s critics say he is trying to pit the two towns against each other. But event supporters disagree and say the issue comes down to supporting military veterans and keeping the festival alive in Teller County.

Making The Rally A Permanent Presence in Woodland Park

The presentation Wear gave last week came in multiple parts. The first two parts had to deal with the event organizer’s needs, should the rally stay in Woodland Park for 2022. During the last part, Wear asked the city for financial aid to help the event succeed.

His presentation last week touched on a few communication problems, which Wear believes can get resolved, based on conversations he has  had with the city manager.

The Rally founder wants to attract more vendors and visitors for the 2022. Last year, due to timing, the event only lasted part of Friday and all-day Saturday.

The new plan would expand the event over multiple days, similar to what previously occurred in Cripple Creek. Wear said that he had plans to work with the local crafts fair and Farmers Market so they could have the event at the same time.

“The restrictions on the timeline of the event footprint significantly hampered our ability to make the event succeed to reasonable expectations of what we are used to and what the potential of this event is,” Wear said. “The bottom line is we can’t expect to attract more features, exhibitors, and visitors without extending the duration of the event and the amount of real estate the event is allowed to utilize.”

Wear said that this year he plans to work better with the local craft fair and Farmers Market to have one large event with a diversity of vendors.

The event organizer said that he thinks the Salute Rally could help both organizations. “Management of the craft fair, in our conversations with them, has been very positive and cooperative during the conversations so far and the suggestions we have brought forth to make this one very successful Friday,” Wear stated.

“The submitted plan that we put before you, will in no way financially harm either of the half day events. In fact, it’s just the opposite. The plans that we submitted will facilitate possibly the largest turnout all summer for both of those smaller local summer events that happen on Friday. On the other hand, if our plan to combine the three events is not permitted, then the Veterans Rally is again going to be impacted in a big way as it was last August.”

Wear also brought up the issue of money. The ProPromotions president plans to bring back the Vietnam Veterans Traveling Memorial Wall. This will request will require some financial help from the city.

Wear asked council for $4,500 for a non-refundable deposit to get the wall in town for the rally. He then said that they could raise funds for the remaining $5,500, the estimated costs for having the wall.

Another part of the proposal was to build a new veterans’ memorial in Memorial Park next to the Dickson Memorial. Weir asked for around $4,000 from the city for the new memorial. This would serve as place for events during the rally.

However, nothing is set in stone yet, as the council is just starting 2022 budget discussions.  Local residents and business owners in the community are asked to go to city council meetings and reach out to elected leaders to engage in the conversation about the future of the Salute to American Veterans Rally.