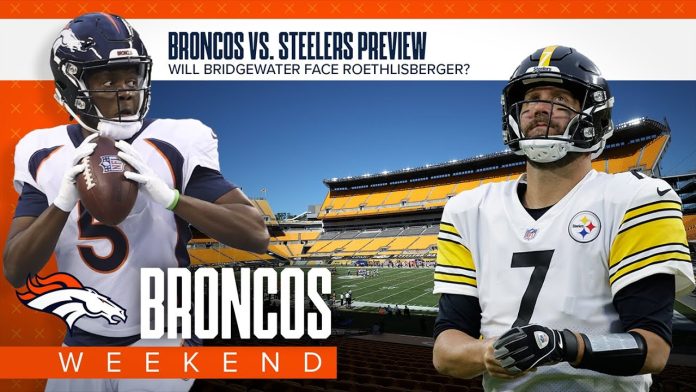 Lock vs Roethlisberger in Sunday Showdown?

After being beaten convincingly by the Baltimore Ravens last week, the Broncos head to Heinz Field in Pittsburgh to take on the Steelers.

Last week’s game cost the Broncos dearly with more injuries added on to their already depleted starting lineup. Bronco Quarterback, Teddy Bridgewater had to leave the game in the third  quarter with a concussion. Drew Lock came in to replace Bridgewater, but couldn’t get anything going on offence.

According to the NFL concussion protocol, Bridgewater must pass a five-step protocol before he can return to play. The protocol is described as a “5-step return-to-participation process. After being sidelined, the player must undergo a five-step process before being allowed to take the field again.

The first step involves rest and limiting activities, which may increase or worsen symptoms. The player may do stretching and balance activities. If the patient does not develop signs of a concussion, he may be cleared to go to the next phase.

Phase two involves the start of a graduated aerobic exercise program. He must show that he can engage in cardiovascular exercise without aggravating his symptoms.

In phase three, the player will engage in exercises that begin to mimic football-specific activities. He may also practice supervised strength training.

In the fourth phase, the patient may participate in club-based non-contact training drills. These include throwing, catching, and running.

The fifth and final phase involves taking part in full football practice, with full contact. Once the player has thoroughly practiced, the next step is being cleared by the Club physician.

After that, he must be examined by the Independent Neurological Consultant. If cleared, he will be allowed to play in the next game.”

With these procedures, it is highly unlikely Bridgewater will be back on the field in time for next week’s game.

Last week Lock left off where he ended his season last year with an interception in the end zone. He threw 21 times and completed 12 of those for a meager 113-yards.

Not the Steelers of Championship Days

The Steelers are not your grandfather’s Steelers. Steeler Quarterback, “Big Ben” Roethlisberger, is showing his age and the lingering effects of his history of injuries.

Last week the Steelers lost to the Green Bay Packers. Big Ben had to throw the ball 40-times in a vain attempt to come back and threw one interception in the process.

The loss to the Packers was not without some Steeler history. Roethlisberger recorded the 400th touchdown pass of his career. The touchdown pass to Wide Receiver Diontae Johnson was a 45-yard strike on the opening drive for the Steelers.

It was the only touchdown the Steelers scored until the end of the fourth quarter when it was too little too late.

The Steelers have historically been a smash mouth, run the ball team, but since the departure of LeVeon Bell they’ve had a tough time finding someone to pound the rock. Last week, Steeler Rookie Running Back, Najee Harris only managed 62-yards on 15 carries, but he did score on a 1-yard run in the second quarter.

To add to the injury woes, 14 other Broncos were questionable for last week’s game and Special Teams Player, Devontae Spencer had to leave the game against the Ravens last week with an unknown injury.

The loss of the two Bronco starting offensive guards (Risner and Glasgow) was key to last week’s defeat. The Ravens exploited the backup guards and sacked Bridgewater and Lock 4-times and hit the Bronco quarterbacks 11-times.  If Risner and Glasgow are not available next week, it’s going to be a tough game against the Steeler defense.

If Lock has to play next week, it  could very well become the second Bronco loss in as many weeks. The last line of defense for the Broncos against the Steelers is going to be the Bronco defense. They will have to keep Big Ben from going deep with the passing game.

Game time for the Denver Broncos-Pittsburgh Steelers showdown is 11 a.m. Sunday (Oct. 10) in what should become a pivotal contest for both teams.  The game will be held in Pittsburgh, so don’t get shocked with the infusion of Terrible Towels, the region’s signature display item.

This is a city as crazy about football as Denver. In fact, live in Pittsburgh and root for a different team, you are kindly escorted out of the state in a less than merciful manner. And if you say anything nice about Cleveland; well let’s, put it this way,  the consequences are quite ugly.

For local Broncos and NFL viewing options, check out McGinty’s Wood Oven Pub, in Divide, the Center of the Known Universe, the sponsor of this year’s Broncos preview columns.  McGinty’s showcases all NFL games  Plenty of drink and food specials abound, and you can’t beat the atmosphere in their sports bar.

For extra pigskin predictions, check out the choices of TMJ sportswriter and Community Celebrity Trevor Phipps by viewing www.mountainjackpot.com. More predictions will occur from other renowned local personalities in the near future.  Stay tuned and enjoy the Broncos game and other exciting sports action this weekend.