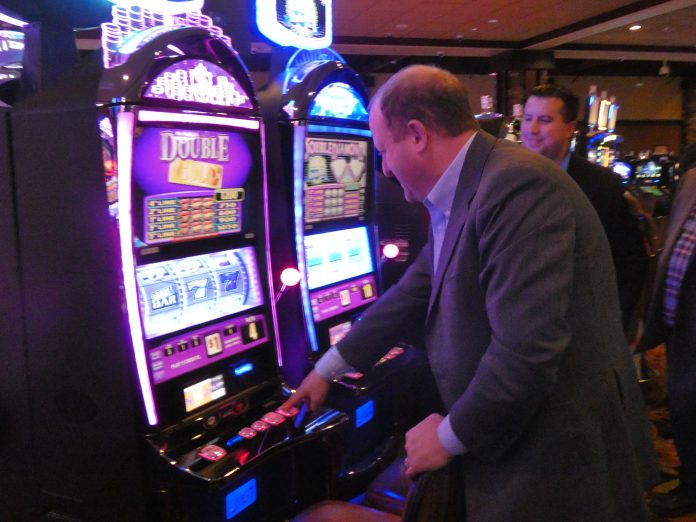 In a rare, historic and unprecedented move,  Colorado Governor Jared Polis embarked on an extended trip up to Cripple Creek last week, marking the first time a sitting governor made an official visit to Teller County in several decades.

He was also the only Colorado governor since Roy Romer (who served in this office during the initial pro-gambling campaign and early debut of the industry) that set foot into a casino and tried his luck on a slot machine.

A big smile flashed across the governor’s face, as he toured through the small gambling community on the eve of the 30th anniversary of limited stakes gaming on Sept. 29. He also appeared to enjoy his trip to a local casino, and his brief time actually trying his luck at the slots. 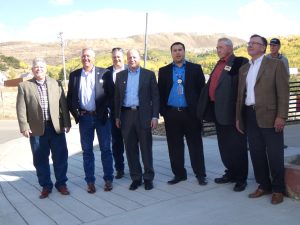 In fact, after the governor left, members of his staff jokingly said that they were worried he was having a little too much fun and they hope he wouldn’t stay too long.

All fun aside, the governor got a fair does of concerns raised by local leaders and law enforcement officials.

The trip started with a lunch at the county’s Centennial Building, where local leaders from the county and representatives of the three municipalities in Teller – Woodland Park, Cripple Creek and Victor — were present. During lunch, the governor went around the table and asked each local leader about their specific issues. 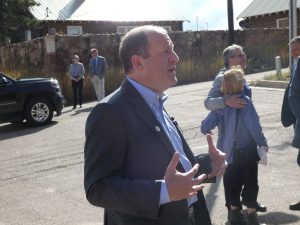 The governor then toured the Aspen Mine Center and met with  Executive Director Ted Borden and talked with volunteers and staff members.

The governor’s next and last stop before leaving town was the Wildwood Casino. He first met with General Manager Matt Andrighetti who led him on a tour of the gambling floor and showed details of how the devices operate and nuances associated with the gaming technology.

Polis then decided since he was there to try his luck on a slot machine. He put some cash in a dollar machine and played a couple of times until he hit a small jackpot of $18. Polis appeared to relish the experience.

During the earlier lunch meeting, local leaders raised  concerns of the many challenges the county and the municipalities have been facing, especially in the wake of the pandemic. The two main subjects dominating the discussion were the current employee shortage and the lack of affordable workforce housing on a county-wide basis. 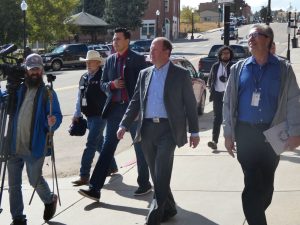 Teller County Commissioner Erik Stone emphasized the seriousness of the employee shortage subject when he told the governor that since the pandemic started, the casinos in Cripple Creek have encountered an employee shortage of well more than 100 workers. “I know there was great hope that once the extended federal unemployment benefits ran out on September 6, that there would kind of be a flood of applicants. But I don’t know that they have really seen that,” Stone said. 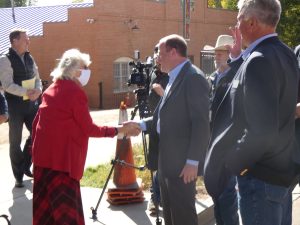 The governor replied by saying that he didn’t think that ending unemployment benefits would bring people back to work considerably. “I never believed that, that’s why I didn’t turn the money down,” Polis explained. “I wish it did. If I would have been convinced of it, I would have turned the money down. But that was money then that people got and spent in their local stores and restaurants.”

When Teller County Sheriff Jason Mikesell got the floor, he also talked about the inability for the department to get new deputies as the sheriff’s office has dozens of open spots. He also said that he has seen an increase in crime due to high recidivism rates, in which people convicted of crimes keep getting released back onto the streets.

“The bigger issue is not being able to get people through academy and the state’s POST system quickly enough,” the sheriff said.

The governor said that there is action the state has considered to help get more people into law enforcement.

“We have been talking about some kind of incentive for law enforcement, but it can’t just be a one-time thing because you don’t want them leaving after two years,” Polis said. “But, some concept to where maybe they get their college taken care of or an incentive if they have been there for a certain length of time. The other thing we have considered for more rural counties that are undersized relative to states our size is that CBI can step up and take on more of the work load, which could free up more local resources to do more of the local work.”

The sheriff also recommended that the state come up with a way for counties and cities to do their own law enforcement training. “I think an idea also may be to assist local agencies in funding police academies locally,” Mikesell said. “Because, really what I want is to be able to take someone locally in my area and train them here. One of the biggest problems is trying to get people into academies because of the reduction due to COVID.”

Towards the end of the meeting the governor asked Teller County Public Health Director Martha Hubbard how the state could help get the county’s vaccination numbers up.

“I wish I had that magic answer,” Hubbard said. “If I knew we would be there. It’s very representative of our diverse population. We have very strong believers that are anti-vaxxers here, which has been historical for Teller County not just with COVID. That is a hurdle that we keep trying to climb above, but I don’t think I have an answer to it.”

Stone stated that county officials are considering using the current data to show the benefits of getting vaccinated.

Hubbard did say that the population over 50 in the county is about 75 percent vaccinated. She said that the lower overall vaccination percentage,  slated at only 54 percent, is due mainly to people under the age of 50 not getting vaccinated.