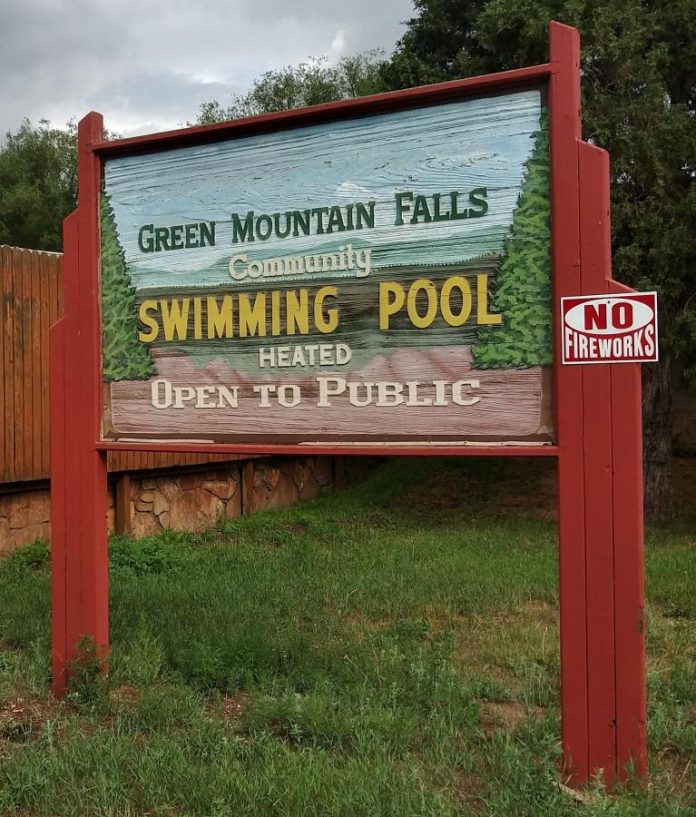 Green Mountain Falls’ elected leaders may plunge into the pool waters again, with a national management team ready to take the lead dive.

This could set the stage for the opening and operating of its municipal pool for the summer again. However, the big question centers around finances, as the town would have to pay nearly $23,000 a year, a cost which wouldn’t include a front pool office person.

But the trend of contracting out more services was a familiar theme at last week’ s regular trustees meeting. Besides pool management, the town may turn over its park maintenance work to an outside firm, which would free up the public works crew to focus more on road improvements, according to Town Manager Angie Sprang.

Alison Abbott, who represents USA Management, which does pool and aquatic management in  many areas across the country, made a pitch to town leaders last week for operating the pool facility during the summer.

Like many communities, she noted that Green Mountain Falls has encountered a big problem in staffing these facilities.  “Recruiting has been very difficult,” said Abbott. She said their company could play a big role in taking this responsibility off of the town’s shoulders by running the facility and offering a detailed  training and recruiting program for lifeguards and do community education with residents.

In addition, Abbott cited a pro-active program regarding offering swim lessons and tests. More specifically, she emphasized that their company are staunch proponents of up-to-date swimming education, water safety and training. “They (our lifeguards) are not baby sitters. They are first responders,” said Abbott. “We are really passionate about water safety.”

As part of their proposal, the company would be able to finance 49 hours a week of employee work. An honor system would be set up for collecting pool user fees, instead of hiring a separate person for those duties.

The price tag for this management plan is slated at $22,572 annually, for a three-year period.

The trustees gave the plan a friendly reception, but wanted to review the expenses of this proposal a little more closely.

Sprang told the board that with this proposal, the pool would still incur a slight deficit, based on revenue they normally receive from users. But she cautioned that nearly all municipal pool facilities operate at a loss.

“It would cost us about $18,000 to run it on our own,” said the town manager, who admitted the contract costs would slightly exceed what they have paid out in the past.

The topic of re-opening the pool, though, has attracted much community interest.

However, the finances of making that happen, coupled with employee recruiting struggles, have been quite difficult. The pool, once dubbed as big community draw, has not run at a normal level for some time. And with the Aquatic Center bustling up the road in Woodland Park, many locals want to see the  GMF pool reopen again.

No decision was made at last week’s meeting. This will  become part of the 2022 budget blueprint.

Sprang unveiled an early version of the 2022 budget, calling for about $725,000 in general fund expenses.

In addition, the town will sport a capital expenditure fund of close to $750,000.

Sprang noted that sales tax revenue has increased by 22 percent in the last year.

The budget plan again calls for the continuation of the paid-parking program, with an estimated $19,000 in projected revenue. Sprang said the town plans to continue its pilot program of charging for parking on the weekends for extended visits.

This program will pick up again in late spring.

And in line with the pool management proposal, the town is considering contracting out its park maintenance work to an outside firm for $13,350, and relieving town staff of these duties.  The town manager cited this as a good way to free up their public works crew, so they can concentrate 100 percent on road improvements. With a pot of funds, the town  will receive in grants and from the state, she is confident that 2022 could be a turning point as far as road enhancements.

That was sweet music to ears of some trustees, who are worried about road, roads and roads. “It seems impossible to get the roads in shape,” said Trustee Katharine Guthrie.  She cited a major concern with addressing road culverts.

Needed road improvements have been the  main complaint of most residents.  One long-time resident, Wes Simshauser, had been spearheading a major protest effort on a daily basis to highlight the problem. He maintains that this is the worst condition of GMF roads in several decades

Many locals agree, but crafting a funding solution hasn’t been easy.

The town will reap some windfall from the  federal American Rescue Plan Act to the tune of $181,474 for a several-year period.  But these monies can only be spent for certain projects. The town also will get $92,400 from the Colorado Department of  Transportation, a good portion of which can be allocated for public works operations.