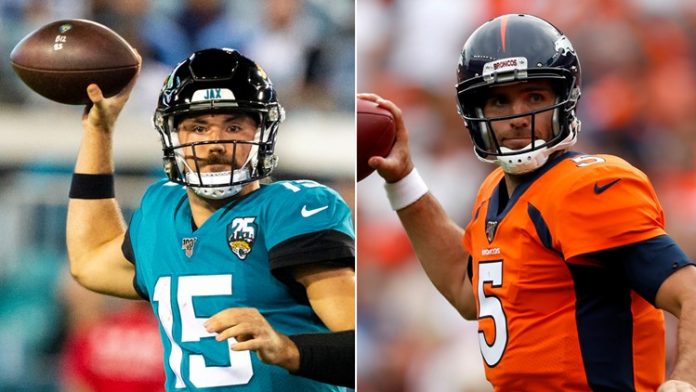 Broncos  Expected to Trample the Jaguars

Now that the Broncos dispatched the New York Giants last week 27-13, they travel to Jacksonville, Florida to play the Jacksonville Jaguars (Jags).

Look for a good old-fashioned Bronco romp, with the Jags pleading for mercy.

The Jags fell to the Houston Texans last week 37-21.

Chris Manhertz who stumbled into the end zone. It was the lone highlight in an otherwise rough first NFL half. He went into halftime with a pair of interceptions and a 27-7 Jaguars deficit against a Texans team expected to be among the worst in the NFL. He did gather his composure to end with 3-touchdowns and 3-inceptions for the day.

The Jags showing against the Texans indicates they are going to have a rough season. If they can’t rush the ball against one of the NFL’s worst teams they’re not going to far well. Their best rushers Carlos Hyde and James Robinson couldn’t break 100-yards rushing between the two of them.

Lawrence had to throw the ball 51 times last week. That isn’t going to fly against the Broncos’ “No Fly Zone 2.0”

The Jags defense put up a decent fight last week, but they’re no match for the much improved Bronco offensive line nor the Broncos excellent secondary.

The Bronco offence is a hungry bunch and they’re not afraid to mix it up. There were a few skirmishes with the Giants defense last week. They’re playing with attitude.

Denver Quarterback Teddy Bridgewater is earning the name “Steady” Teddy. He managed the game well and connected for two touchdown passes last week. Speaking of managing the game, the Broncos ran over SIXTY offensive plays last week. Bridgewater spread the ball around to seven different receivers and totaled 264-yards on 36-passing attempts. Bridgewater also showed his athletic side when he scrambled for 19-yards and a needed first-down.

The Bronco running game is back too. Melvin Gordon is looking like the running back Bronco defenses feared when he was with the San Diego Chargers.

On defense, Von Miller is back and looks like vintage Von. Two sacks last week are just the start of what may be a double-digit sacks year for the Von’ster.

As a whole unit the Bronco defense kept the Giants out of the endzone, except for one touchdown, until the last few seconds of junk time when the Giants scored again.

The Bronco secondary was all over the Giant receivers like a ‘crow on a Junebug.’

The AFC West Division is off to the start most thought it would. Both the Chargers and the Chiefs won their Sunday games. The Chiefs had a tough time against the Cleveland Browns and had to play catch up in the waning minutes to beat the Browns. The Raider score won’t be known by press time since they play the Baltimore Ravens on Monday night.

The bad news for the Broncos: Wide Receiver Jerry Jeudy left the game with an ankle injury and his status is unknown for next week. With Noah Fant, K.J. Hamler, Tim Patrick, Albert Okwuegbunam, Courtland Sutton, and Eric Saubert picking up the slack the Bronco receiving corps is still in good shape for next week.

TMJ Prediction: Trevor Lawrence’s offensive line can’t hold up to the Bronco D line and Von Miller. Look for Lawrence to continue to throw picks to the Bronco secondary. Broncos go 2-0 against the Jags 24-14.

For more NFL predictions, including ones by always right sports reporter and TMJ jail bondsman Trevor Phipps, visit our website and Facebook page.