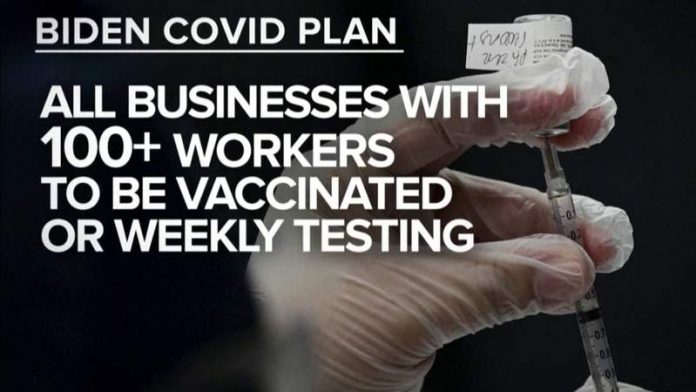 As cases of COVID-19 surge across the country, President Joe Biden went into attack mode late last week, taking an aggressive stand against the pandemic by implementing vaccine mandates for millions of Americans.

But according to county elected leaders, the new rules won’t affect local governments. However, officials are questioning the right of the federal government to crack down against private companies.

Biden said that he is going to require all federal employees, and those who have federal contracts, to be vaccinated. There will be medical or religious exemptions but if employees who aren’t vaccinated don’t fall into those categories, they can be subject to disciplinary action including possible termination.

All health care workers that receive any federal Medicare or Medicaid funding will also be required to get vaccinated. This mandate covers all types of health care facilities, and is expected to affect about 17 million workers.

As part of his new policies, Biden has issued a mandate on employers with 100 or more employees, requiring that their workers get vaccinated, or submit weekly tests. Enforcement for this policy will be conducted through the Department of Labor’s Occupational Safety and Health Administration (OSHA), which will fine businesses $14,000 if they fail to comply.

Ever since Biden’s announcement was made, he has received backlash from state and local government officials. Many governors across the country have stepped up and said that they are not going to follow or enforce the new mandates.

Colorado’s GOP Chairwoman Kristi Burton Brown also spoke out against Biden’s new regulations. “The poor decisions made by the Biden-Harris Administration continue to astound me every day,” Brown said. “This latest decision is a shocking federal invasion into the rights of both businesses and individuals. Make no mistake – the Colorado GOP stands with business owners, minority communities, and families who deserve to make their own medical decisions. I look forward to seeing this forced mandate challenged in court and found unconstitutional. ”

According to Teller County Commissioner Erik Stone, it is likely that the county will take a similar stance.

“It doesn’t look like what he (Biden) is proposing will reach state and county governments,” the commissioner said. “Obviously he has zero authority over state and county governments. On the same note he has zero authority over private industry in regards to an agreement between an employer and their employees. For him to suggest that he can mandate that all companies with more than 100 employees must require vaccinations is far outside any authority he has as the president.”

Stone said that he thinks it would be better to incentivize people to get the vaccine instead of mandating it. He said that Biden’s new regulations are going to lead employers to fire more employees instead of receiving a fine.

Recently, the county offered their employees eight hours of paid-time off, if they could prove that they were vaccinated or that they recovered naturally after contracting the disease. Stone said that what is missing in the federal government’s anti-COVID-19 campaign is the fact that natural immunity is proving to work stronger and longer than the vaccine.

Cases Still on the Rise Locally

As of late last week, the county had experienced more than 2,179 cases of COVID-19 and 20 deaths caused by the disease. There have been more than 150 residents who were hospitalized due to the disease and currently four are in the hospital now. However, since the vaccinations were made available, about 97% of the COVID-19-related hospitalizations were associated with unvaccinated people.

According to County Administrator Sheryl Decker, the vaccinations have been slowly rising, but the cases of COVID-19 have also been increasing. “According to the state we are at 52.4 percent of our eligible population has been vaccinated,” Decker said. “The state’s website shows our two week cumulative cases at 209 per 100,000 which is pretty high and it is about where we were last March if you look at our graphs. Our positivity rate is 5.8 percent and it is ticking down slowly.”

According to Teller County Commission Chairman Bob Campbell, the vaccinations numbers locally are equivalent to other rural areas in Colorado. “I noticed the other day while looking at the statewide statistics which show that the state is in the 70s (percent of people vaccinated),” Campbell said. “But rural counties are exactly where we are at 50 percent or a little higher versus the big cities.”