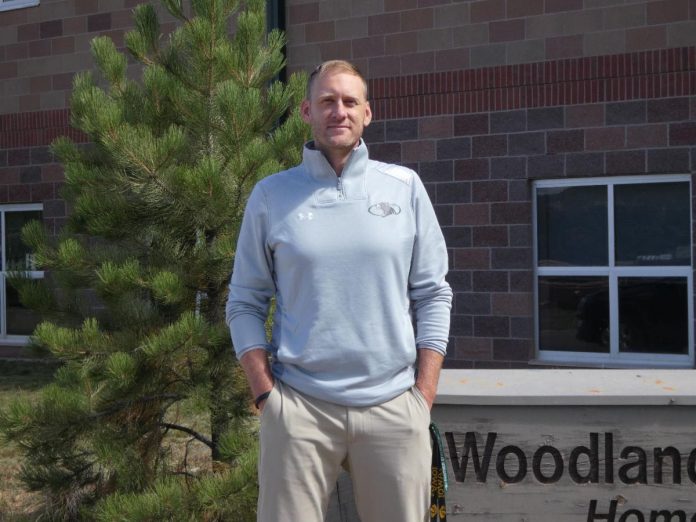 At the start of the school year, Chad Cosner was picked to be in charge of the Woodland Park High School activities and athletics as well as being the new Dean of Students.
Cosner filled the spot that was opened up last school year when veteran athletic director and head football coach Joe Roskam resigned from both positions. Cosner also took on the role of dean of students to help the principals with disciplinary and restorative procedures.
Cosner said that he is excited about his new role and plans to combine both his experiences in counseling and coaching. “When this position opened up last year, I was interested in the aspect of Woodland Park High School Athletics and Activities being a mechanism to help repair some of the relationships with those in our community,” Cosner said. “That is kind of what inspired me and gave me the idea to apply for the position. I feel like the dean of students position has the disciplinary component and I will still get to do that counseling and restorative practice to help.”
Being new to the position, Cosner started by utilizing resources and seeking help from former athletic directors. He also worked on building relationships with the coaches and finding out their needs. 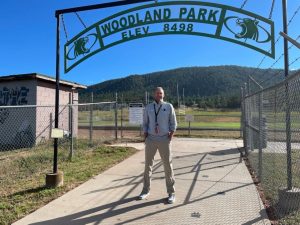 Before the staff left at the end of last school year, Cosner conducted a needs assessment to figure out a direction for the athletics program. “There were three main things that came out of that discussion,” Cosner said. “The first was community that we want to partner with our community in programming. Culture was the second piece. We want to dive into what kind of athletes do we want to push our kids to be. That’s where the integrity and the character well-adjusted mind set comes in.”
The third piece was the desire to compete. “And that’s not through a transactional kind of way but transformational in the aspect of having strong relationships with our athletes and pushing them,” he said.
Since the school year and sports have started up, the new athletic director has been spending his time making sure everything is lined up. He has been “triple checking” facilities and grounds to make sure they are ready to go for game day. He has also made sure referees were scheduled and he has spent time talking to other athletic directors to make sure they are on the same page.
Now Cosner has said he has got to the point where he is focusing on his position as dean of students. “The dean of students position is working with student discipline and behavior,” Cosner explained. “And, it’s really restorative. We want to make sure we are not sending kids home. It’s not a zero-tolerance policy whatsoever. We are having intentional dialogue with our students to help them connect the dots with who is impacted and how they want to see it resolved from a holistic approach.”
On the athletics side as the Dean of Students, Cosner wishes to offer more sports opportunities for kids before they get to high school including more intramural sports at the elementary school level. “From an athletics perspective, we found some priority needs this year,” Cosner stated. “And it is really around building programs and partnering with our middle school, parks and recreation and the Woodland Park Football Club (WPFC). We want to build some excitement for middle school sports and be more strategic in our planning. When we had our coaches meeting at the beginning of the year, our middle school was a part of that. We want to be really intentional with partnering with our community. We want to be super communicative and relational in everything we do from a coaching standpoint.” 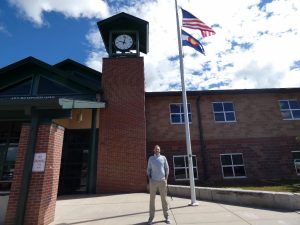 A main goal is to offer more sports at the middle school to help keep more students in the community. Cosner said that he thinks offering more sports at a younger age will help keep students in the school district. He is also working closely with Mrs. Erin Street at WPMS in creating more opportunities at the high school level.
Cosner grew up in Iowa before he decided to move to Colorado with his wife who is a special education teacher. While in Colorado, Cosner obtained his master’s degree and started a career as a school counselor.
Cosner has held some role in the education field since 2003 and has been in various positions since the start of his career. Since he started working in schools, Cosner has also helped coaching several sports including soccer, wrestling, and golf. Most recently Cosner has helped coach for one of the Woodland Park football club teams.
#  #  #
About Woodland Park School District Re-2
A Place of Becoming. Mission: Together, we embrace a culture where all learners are empowered to pursue intellectual, personal, and collective excellence.
Woodland Park School District Re-2, 155 Panther Way, Woodland Park, CO 80863. Phone: (719) 686-2000. Learn more at wpsdk12.org.