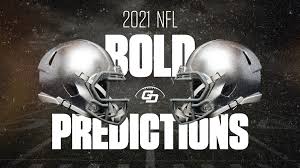 Editor’s Note: The following are some key picks of Trevor Phipps, who covers sports for TMJ, among other duties. Good luck with sports picks for the upcoming week of the NFL season. If you use these predictions in friendly or non-friendly wager, don’t blame us. These are mere opinions. Enjoy the forthcoming season.

Broncos 35, Giants 14- The Broncos looked awesome in the preseason (even though they didn’t really play against any starters), but since the Giants don’t look that good I think it should be an easy one for Denver.

Ravens 31, Raiders 24- This should be a close one but I think the Ravens have what it takes to come up on top in the end.

Chiefs 42, Browns 17- The Browns did come back and look like a good team last year, but I don’t think they have what it takes to keep up with the AFC champion Chiefs.

Chargers 24, Washington Football Team 21- Washington had its moments last year but I think that the Chargers have a good quarterback and will outdo the team with no name.

Colorado State Rams 38, Vanderbilt Commodores 13- There is no telling how good the Rams will be this year but this should be an easy win for them as the Commodores finished last season winless.

Texas A&M Aggies 42, Colorado Buffaloes 24- Even though the Buffs looked good last year and made it to a bowl game I don’t think they will have what it takes to defeat the tough Aggies.

Air Force Falcons 47, Navy Midshipmen 34- Air Force won this famous battle last year 40-7 and I think they will win again but not by as much.