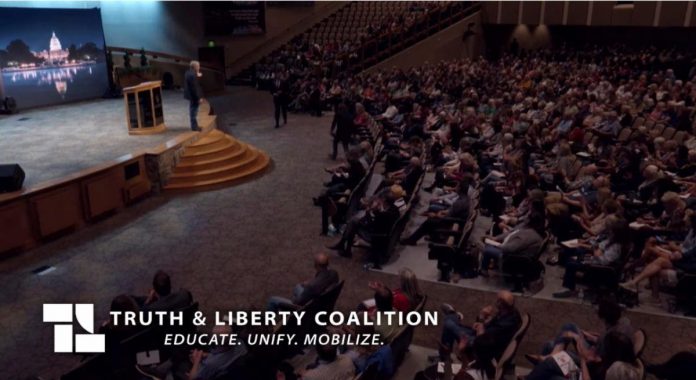 Conservative Christians came together with the resolve to stand for biblical values at the Truth & Liberty Coalition Conference over the weekend at Charis Bible College.
Featuring keynote speakers Andrew Wommack, Mario Murillo, Bishop E.W. Jackson, Pastor Duane Sheriff, and Richard Harris – along with members of Congress U.S. Reps. Lauren Boebert, and Doug Lamborn – the event drew more than 1,000 people Friday and Saturday.
Wommack, president of the Truth & Liberty Coalition, encouraged the Church to stand up for righteousness and become an influential force in culture and government.
According to Wommack, the United States is unique in its purpose due to its Christian heritage. It’s up to Christians to get involved in government, preserve those foundations, and stand boldly for righteousness and morality.
“If we that know the truth don’t stand up and begin to start speaking, who is going to do it?” asked Andrew Wommack in his opening session Friday evening.
Evangelist Mario Murillo said it is the duty of the Church to destroy wokeness. Passivity in the pulpit has allowed critical race theory, the LGBTQ agenda, and other corrosive leftist ideologies to influence ministry and take the focus off the life-changing power of the Gospel.
“I don’t care who you are in this room, you are now a wartime pastor,” said Murillo, challenging ministers to stand on the Word and become aggressive in their preaching. “Not a peacetime pastor, you’re a wartime pastor – start acting like one.”
Boebert, a Second Amendment advocate who has quickly become an influential conservative voice in Congress, spoke on defending our constitutional rights. The Rifle, Colorado, native has gone from being a concerned citizen, mom, and small business owner, to first-term Republican congresswoman because she simply wanted to get involved and make a difference.
To Boebert, there is a need for more Christian conservatives to participate in government.
“I need you to get involved at every local level,” said Boebert. “I need you speaking up – I need the world to hear your voice. You know the Word of God and you know there is power in your words.”
Bishop E.W. Jackson, founder of STAND: Staying True to America’s National Destiny, spoke on American exceptionalism. Attacking critical race theory, Jackson celebrated what makes our nation great.
“America is God’s gift to you, and you are God’s gift to America,” said Jackson to the conservative Christian audience.
With informative workshops and the opportunity to connect with conservative Christian organizations, the Truth & Liberty Coalition Conference offered attendees the chance to become equipped to turn their communities back to biblical and constitutional values.
The centerpiece of the conference was 9/11—a moving and inspirational commemoration of the 20th anniversary of Sept. 11, 2001. The dramatization depicting heroes of Sept. 11 was developed by Robert and Elizabeth Muren—creators of the patriotic In God We Trust musical and leaders of the Charis Bible College Film & Production School.
According to Richard Harris, executive director of the Truth & Liberty Coalition, “This conference was a great encouragement about the timeless power and the principles that have made America a blessed nation. Every speaker brought powerful insights and practical wisdom that will equip attendees to serve their communities, state, and nation effectively in these difficult times. Truth & Liberty is greatly honored to have the participation of so many accomplished leaders.”
To watch archived sessions of the conference, visit Truth & Liberty’s website.
About the Truth & Liberty Coalition:
Established in 2019 by Andrew Wommack, founder of Andrew Wommack Ministries, and other Christian leaders, the Truth & Liberty Coalition offers a variety of programs, tools and resources to be able to focus on conservatism in the United States. Visit the Truth & Liberty website for great practical resources for standing for truth in the public square and learn about becoming a member.
https://truthandliberty.net
About Andrew Wommack:
Andrew Wommack is president and founder of the Truth & Liberty Coalition, Andrew Wommack Ministries, and Charis Bible College. He and other Christian leaders established the Truth & Liberty Coalition to educate, unify, and mobilize believers in Jesus Christ to affect the reformation of nations through the seven mountains of cultural influence. Since 1968, he has taught God’s Word with clarity and simplicity, emphasizing the unconditional love and grace of God. His vision is to spread the Gospel as far and deep as possible through his daily Gospel Truth television and radio programs, broadcast nationally and internationally, as well as through GospelTruth.TV, his internet television network.
About Executive Director Richard Harris:
Richard Harris graduated from the Charis Bible College School of Ministry in 2015. Before coming to Charis, he earned a degree in political science from Oklahoma State University in 1987, and a Juris Doctorate degree from Cornell Law School in 1994, magna cum laude. He practiced law at all levels of state and federal courts for 20 years, including a case before the United States Supreme Court. Richard served for several years as the legal counsel for the Oklahoma Conservative Political Action Committee.