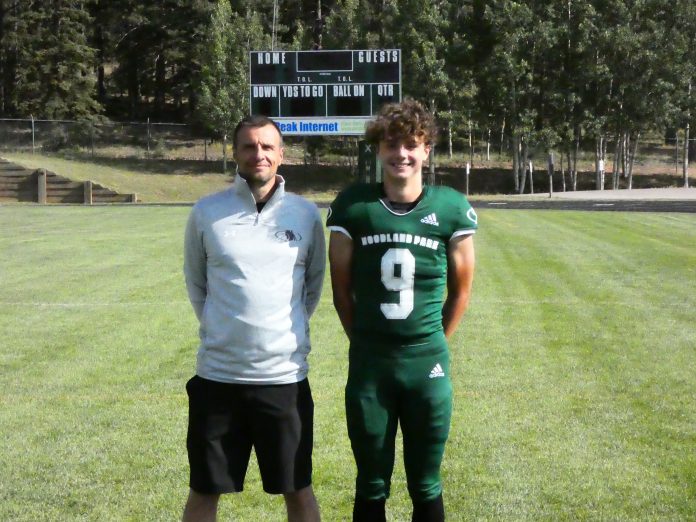 The special time of year for local football players, their families/friends and fans has finally arrived.

Friday Night Lights’ fever begins this week, as the Panthers launch a new season, and one hopefully  spared by the COVID-19 epidemic. The pandemic-related changes tackled the WP’s bullish start in 2020.

A new optimistic spirit was exhibited in the eyes of the WP Panther players and coaching staff members as they made their final preparations last week for their big Friday Night Lights debut.

The Woodland Park Panthers were hard at work on the practice fields, preparing for their big season opener match against Basalt this Friday. 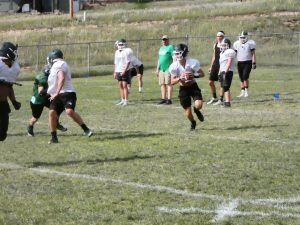 On Thursday, the team participated in its first scrimmage of the year where they played against Banning Lewis and Colorado Springs Christian School on the University of Colorado at Colorado Springs campus.

Team leaders are happy with the way pigskin play is progressing on  both sides of the ball. This season, the WP Panthers will have a new driving force behind them, as former assistant coach Chad Drummond is taking the reins after long time head skipper Joe Roskam resigned at the close of the 2021 school year. 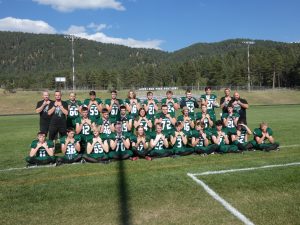 Fret not. Coach Drummond is not new to the team as he has been a part of the Panther football coaching staff for the last 10 seasons. Based on the observations of TMJ News, Drummond is full of energy, taking pride in getting involved with each practice snap.

Bring on the Steeler, Traditional Football-style

The new coach, in fact, is excited about the 2021 team, and the changes he is going to make with their game- play strategy. “In years past when I coached under Joe Roskam, we had an air raid (passing)  system,” the new coach said. “I’m a Pittsburgh kid, so I’m a  ‘ground and pound’ kind of guy. So, we will be playing a lot out of I-formation. You won’t see us in spread and you probably won’t see us in trips unless the situation is advantageous for us. We are looking to go with more I-formation, smash mouth football, a little wing tee, and traditional, old school football.” 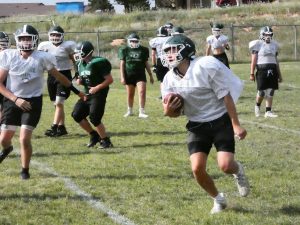 The team’s playing leaders also seems to be excited about the new strategy that heavily emphasizes the  run game. Junior running back Aiden Hernandez is pumped and sees this season as his time to shine.

“I’m just ready to play offense,” Hernandez said. “I think Coach Chad (Drummond) is doing good with our offense. And I think that with the new offense we are running that we are going to go pretty far. There are some running plays I am looking forward to, and hitting some people.”

Hernandez said that through his high school football career,  he has learned to “be aggressive and never give up.” The Panther stand-out plans to run the ball a lot while playing on offense, and is looking forward to going after the quarterback while on defense.

The team’s head junior quarterback, Mason Pyles, said that he is looking forward to taking the reins as a strong leader and holding his teammates accountable. “I think some strengths for the team will be running the ball because that’s what we are focusing on this year,” the Panther quarterback said. “And with the short routes I will be throwing this year they can break big. So short to big.” 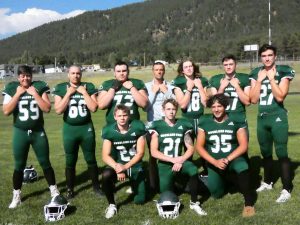 He said that he wants to work on getting better at reading defenses this year.

Center and defensive lineman junior Noah Nelson is also ready to be a mentor and help develop the younger players. “My strengths this year are going be being a leader,” Nelson said. “I have been lifting weights a lot and I am one of the strongest players on the team. I also plan to pick people up if they make mistakes. People are hungry to win this year especially varsity. I am excited for it. A lot of people are trying to go to state this year and me too.”

However, even though the coach is happy with the team’s progress, he cites their forthcoming schedule as outright brutal. “I think everybody in our division is a hard team to be honest with you,” Drummond said. “Manitou just won a state championship. La Junta is a legacy team. They have been great for decades and Lamar I see the same way. So, I don’t think there is a single team out there that doesn’t concern me. My goal is to be competitive in every one of those competitions.”

As for special areas of improvement, Drummond  cites more focus and a  sense of urgency during games. He also wants to concentrate on the small details. “I’m trying to get them where we are 100 percent from the start of the rep until the end of the rep,” he said. “Realistically the thing that I would like to fix the most right now are focus and attention to detail. I’m a big believer that it’s the little things that get you caught.”

During practice last week, the team focused on their game play in their away opener against Basalt. The Panthers’ season starts on the road this week against the Longhorns.

The Panthers then play another road game against the Elizabeth Cardinals. The team’s first home game takes place on Sept. 10 against the Berthoud Spartans.