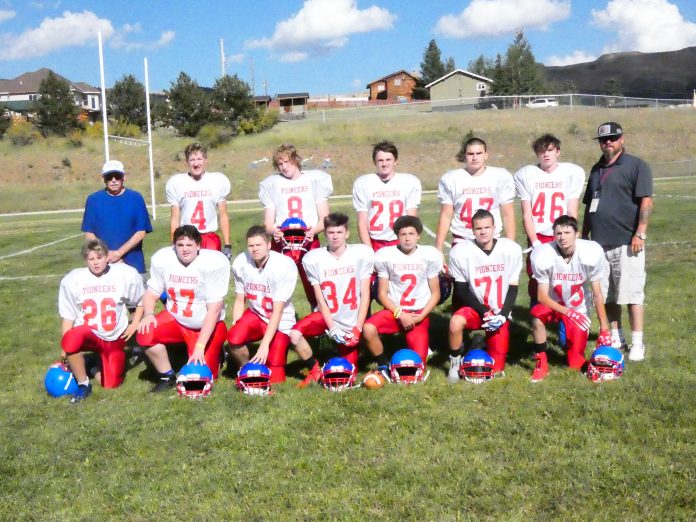 Residents, parents, business operators and students in the Cripple Creek and Victor area are starting to feel the football craze as the local Pioneer football team hits the practice fields in preparation for the start of official play this week.

Moreover, players too are excited about returning to more of a normal season this year with a total of eight games. And unique to this season, the players will have the chance to play under the Friday Night Lights during three of their away games.

Last year, just about the entire world was in turmoil and fall sports took a big hit. The southern Teller County region really was especially impacted. Due to the pandemic, the Cripple Creek-Victor Pioneers had a drastically shortened schedule, and they were only able to play three games during the month of October.

The other bad news from 2020: The team lost all three games. And, these defeats involved significant losses.

However, the team is back in action for 2021 and the players plan to mount a vengeance style of play, not afraid to demonstrate a “chip on the shoulder” mentality, aimed at putting the 2020 season in the rear-view mirror. Coaching changes have always been an obstacle the team has faced.

Unfortunately,  this trend still persists as last week the Pioneers lost their head coach. But a new head skipper hits the practice fields this Monday to prep the team for their first game on the road against Flagler on Friday.

Depending on how the team fares this year, they could have a chance to pick up wins in some key games. The Pioneers’ schedule starts out looking pretty easy, but then it gets more competitive towards the end of the season.

A key test for the team will take place this week as the Pioneers travel to Flagler for a 4 p.m. match. Flagler also lost all of their games in 2020, so picking up a win during the first game could give the Pioneers some momentum.

The pigskin situation gets tougher on Sept. 25 when the Pioneers challenge Mountain Valley at home. Mountain Valley is consistently one of the league’s toughest teams, and they only lost one match last year.

In October, the Pioneers have four games starting with Cotopaxi who played decent in 2020 and finished 2-4. It will get rough again when the Pioneers take on Sierra Grande at home on Oct. 9. The Sierra Grande Panthers looked stellar last year and they finished the season only losing twice.

During their last home game on Oct. 16, the Pioneers could have a chance to pick up a win against the Hanover Hornets. But the Hornet team proved to be good at times as they finished the 2020 season with a .500 record.

During the team’s last match of the year, the Pioneers could have a chance to pick up a non-league win. The Pioneers play the Hi-Plains Patriots on Oct. 22 which is a team that struggled to win last season.

Due to the size of the high school, Cripple Creek-Victor plays in a special six man league against other smaller high schools in rural parts of the state. Since there are less players than the usual 11-man teams, the games turn out to be played with a higher energy.

And, depending on how many players are on the Pioneer team, the kids may have to go from playing offense straight to playing defense. The team’s season starts on the road this week and their first home game is Sept. 3  at 2 p.m.