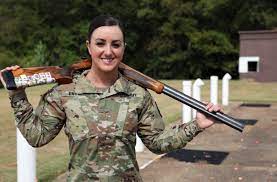 Last Sunday, the Tokyo Olympics wrapped up with the U.S.A. snagging over 100 medals.

China was able to squeak by and score more gold medals than the U.S., but America was the champion when it came to the total amount of medals won.

Colorado also came out on top as the state produced more medal winners than many countries. Due to the Olympic Training Center being located in Colorado Springs,  many Olympic athletes have ties to the state.

According to an article written by 9 News in Denver, there are 34 athletes that list their hometown as being somewhere in Colorado. This puts Colorado in third place in the country for producing the most Olympic stars.

There are also six other athletes that either live and train in Colorado a good part of the year or went to college in the state. There are also athletes competing on foreign country teams that have links to the Centennial State. In the winter time, Colorado athletes have even more of a presence.

In total, 11 athletes hailing from Colorado have found themselves on the platform an awarded a medal. Six of them took home the gold after dominating their sport.

Will Shaner graduated from high school in Colorado Springs and he took gold medal in the 10-meter air rifle competition. He started his shooting career at nine years old and he also won the 2016 U.S. National Air Rifle Championship.

Amber English earned the gold in the skeet shooting event after winning the same event in the 2018 World Championships. English is a Colorado Springs native, graduated from UCCS, and is now a first lieutenant with the World Class Athlete Program of the U.S. Army.

Anastasija Zolotic, an 18-year-old Colorado Springs resident, earned fame as being the first gold medalist in Taekwondo coming from the U.S. She won the gold her first time competing at the Olympic level and she also won the silver medal at the 2018 Summer Youth Olympics.

Colorado Springs native Lucas Kozeniesky took home the silver medal in the 10-meter air rifle mixed team event. The star shooter started his career his freshman year in high school and also competed in the Olympics in Rio in 2016.

Cyclist Jennifer Valente earned the bronze medal as a part of the U.S. women’s team pursuit cycling team. The 26-year-old grew up in San Diego, CA, but she attended college at UCCS and majored in mechanical engineering.

At the time of this article, Team USA had won a total of 36 gold medals sitting only behind China with 38. Among the many gold medals, many of them were in track and field competitions. A hefty number also occurred in swimming competitions.