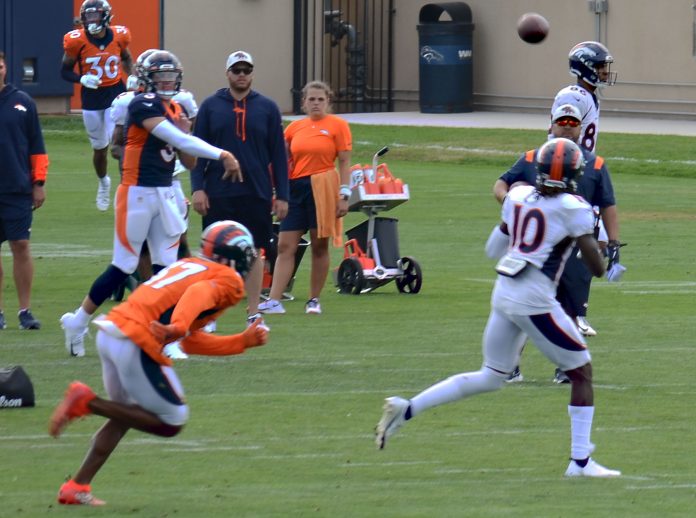 We were hoping to see some intense quarterback action, since the competition between Drew Lock and Teddy Bridgewater has been pretty much a draw up until now. Unfortunately, the coaches decided they would focus on the run game that day. 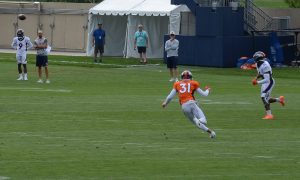 That is not to say there were no passes thrown. Both Lock and Bridgewater threw mostly screens and short over the middle passes to wide receivers and backs. There were a few mid-range throws to Courtland Sutton and Jerry Jeudy. It was good to see Sutton back on the field and healthy after last year’s season ending ACL injury.

As for Jeudy, he was plagued with drops last year, but so far, at least in practice, he didn’t drop any passes. Jeudy also showed his ability to leave defensive backs looking for their jock straps with his quickness and speed. He is expected to have a breakout sophomore season this year. 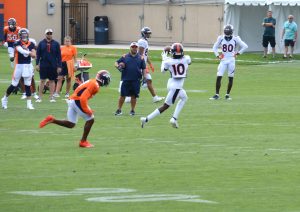 Once again, the quarterback competition looks to be pretty even. On the negative side of the quarterback play, on day 6 of practice, Lock tried to find Jeudy in the middle of the end zone on a red zone play, but Safety Justin Simmons knifed in front of Jeudy to break up the pass. Lock has to avoid these kinds of mistakes this year. However, you can’t take away the hustle that Simmons showed on that play. 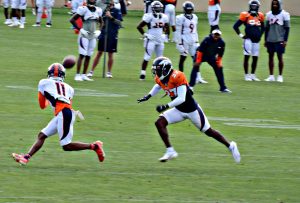 When asked about the quarterback competition, Offensive coordinator, Pat Shurmur said,  “I’ve seen both guys getting better. This is the best version of Drew I’ve seen. He’s done a really good job. Teddy’s got experience, he’s got experience in multiple offenses.”

No one expects either quarterback to jump out going forward at this point. It will, in all likelihood be a photo finish when the decision is made for who will be the starter. The Broncos will most likely name their starting quarterback after the preseason is over. 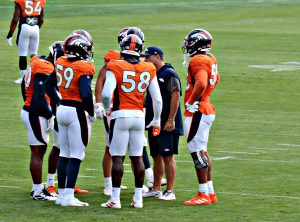 We were too far away to assess the success of the running game for the most part, but rookie running backs Javonte Williams and Free Agent, Mike Boone showed great promise. Head Coach Vic Fangio was pleased with how the run game is progressing. He said, “I thought we ran the ball pretty darn good on offense. I think we had a good progression and I think (Wednesday’s) practice will be even better with the pads on.” Offensive coordinator Pat Shurmur on rookie Javonte Williams said, “He’s been terrific. His running ability is very obvious, but the things that we see are his instincts as a football player. Some people just ‘get it’ and we’ve all been around people who just don’t quite ‘get it’ and they wake up every morning and start over. He gets it and it shows up in his pass protection, it shows up in being able to get lined up and his awareness. He’s got a really bright future.” Last season’s number one running back, Melvin Gordon was the offenses best player last year and looks really good so far according to reports. 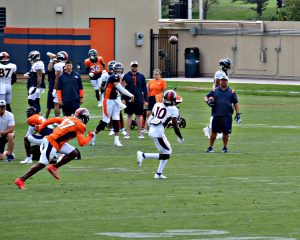 He figures to be the main guy right now.

On defense, the guys looked really good. With Von Miller and Bradley Chubb back to terrorize opposing quarterbacks and the addition of first round pick Cornerback, Pat Surtain II, the defense is showing signs of being a top 5 defense this season. Surtain might he be the Broncos’ best cornerback when the regular season starts. That’s not a stretch. He is playing all over the field, a sign of how much the coaches trust him. 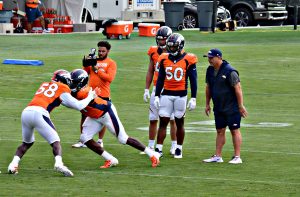 On the negative side, the defense had a lot of offside penalties. When the rubber meets the road in the regular season, these mistakes can cost the team games. At the NFL level, quarterbacks are savvy and know how to “hard count” a snap. If the defense can’t correct the early jump, this could be a long season. 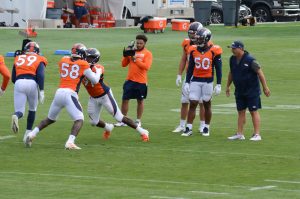 TMJ early prediction: The Broncos first three regular season games are against team with dismal records last year. If they can’t go 3-0 to start the season, it’s going to be a long year. At this point in time, judging by how the coaches are dealing with practice, they are going to lean heavily on the run game. If this pans out, Bridgewater will likely be the starter this season. He has the experience to run a run heavy offense, manage the clock, and keep guys like the Chiefs’ Patrick Mahomes, and Chargers, Justin Herbert twiddling their thumbs on the sideline.