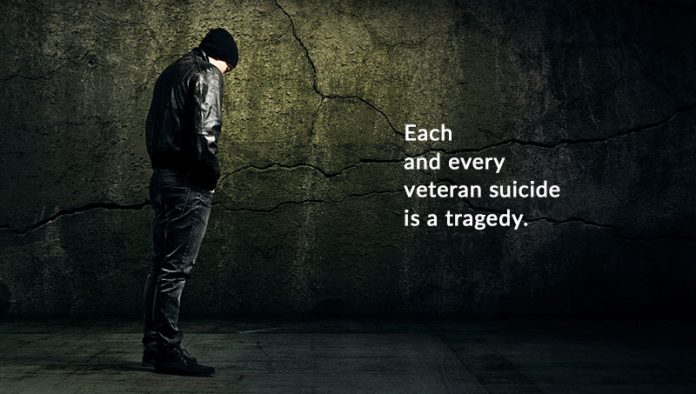 Nationwide, veteran suicides have commanded much discussion because these incidents occur way too often.

And locally, it has been a hot topic, with considerable attention by elected leaders and key civic figures as more than 3,000 veterans live in Teller County. This constitutes about 15 percent of the county’s population.

According to the Veteran’s Association’s (VA) National Veteran Suicide Prevention Annual Report in 2019, the suicide rate for veterans is 1.5 times higher than the rate of non-veteran adults. The VA statistics also find that there are around 17 veterans that commit suicide every day in the country.

And, these veteran-suicide numbers have been slightly rising each year.

Two weeks ago, local residents were outraged when the KRDO investigative team broke a story involving a suicide in Woodland Park. According to the report, the incident started last winter when the Woodland Park Police station started receiving calls about a possibly suicidal veteran who suffered from PTSD (Post Traumatic Stress Disorder.

In total, police dispatchers received at least 11 phone calls from friends all over the country that were concerned about the welfare of Army Veteran Chief Warrant Officer Jeremy Mitchell, according to the report. Mitchell had been sending text message to his friends threatening to commit suicide and he even posted a picture on social media of him holding a gun to his head.

WPPD Sergeant Mike McDaniel, who was in charge on the scene, then called WP Police Commander Andy Liebbrand for instruction as to what they should do. McDaniel recommended to his commander that since they heard Mitchell threaten suicide by cop that he believed the officers should take Mitchell’s wife out of the house, and leave the scene so Mitchell could calm down.

Commander Liebbrand agreed and ordered McDaniel to pull the officers out of the scene so that they would not create a bad situation by confronting him. The next day Mitchell’s wife found him, and realized that he had died by suicide.

On June 7, Liebbrand was placed on administrative leave along with Commander Ryan Holzwarth due to a criminal investigation by the Teller County Sheriff’s Office and the Colorado Bureau of Investigation. It has not been confirmed whether or not the suicide incident has anything to do with the investigation of the two commanders.

Over the last two weeks, the incident was the talk of the town. Many were upset that the police didn’t do more to help a veteran that was struggling with mental health issues. Many residents believe that Mitchell’s life could have been saved if the police had followed their typical protocol when dealing with the mental health crisis that day.

People also have wondered why the police did not call in the MAPS group  to try to help the struggling veteran. One resident brought up the fact that since on the average over a dozen veterans die by suicide every day, the police should be better prepared to handle these types of incidences.

Others are concerned about the lack of transparency and accountability regarding this incident and the investigation of the two police commanders. Since the onset of the commanders’ suspensions and since the highly publicized KRDO New report was published, TMJ News has received several inquiries of people wanting more information regarding the matter.

However, local leaders have remained tight-lipped on the subject due to the investigation not being complete. The Teller County Sheriff’s Office would not respond to comment on the situation.

Woodland Park City Manager Michael Lawson has responded to the incident, but he has not said much about the case. Lawson has issued a few press releases and done some interviews with reporters, but he has not revealed any details, since the investigation involving the two police commanders was opened.

He has said that the situation has concerned him and that the city feels for the family. “What I would like them to know is that the city of Woodland Park is taking this very seriously,” Lawson said. “We are cooperating with the investigation and we look forward to the conclusions of that investigation. If it is found that there are deficiencies, as I mentioned, I can assure the family and our community that we will do whatever is necessary to make sure that any issues that we uncover do not repeat themselves in the future.”

Lawson said that if it is found that there are deficient policies within the police department regarding mental health welfare checks, they will update and fix them. He said that the city may employ additional resources to prevent similar incidences from taking place in the future if needed.

If you or someone you know is experiencing suicidal thoughts, you can contact the National Suicide Prevention Lifeline 24/7 at 1-800-273-8255.