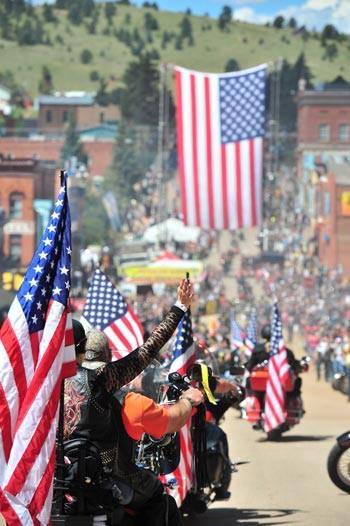 It’s a little more than five weeks away from the much anticipated Salute to  American Veterans Rally, scheduled from August 19-21.

This year will be the first timethe event will occur  in Woodland Park, instead of Cripple Creek, since the event’s inception nearly three decades ago.  There was a several-year period, though, when the rally was held in Winter Park.

Moving such a large event to a new venue did not happen without some difficulty. The main setting for the event will be in Woodland Park’s, Memorial Park. A conflict arose when ProPromotions, (the event organizers) and the board of directors for the Woodland Park Farmers Market got into a dispute over who has rights to the park on Friday, Aug. 20. The Farmers Market board claimed to have rights to the entire park on that Friday from 8 a.m. to 1 p.m. ProPromotions, on the other hand, wants to begin setting up for their event on Thursday, Aug. 19, and get the event rolling on Aug. 20.

Because of this conflict, planning for the event was in limbo for almost 30 days. Wear stated it would cost ProPromotions a substantial amount of money if they have to alter their plans to set up in the park.

The dispute ultimately made its way all the way to city council. Council debated the issue of whether the Farmers Market had rights to the entire park under their temporary use permit. This was the first time in history that the issue of who has rights to the park under a temporary use permit came up, with another event wanting to use the park on the same day. Ultimately, council gave overwhelming support to the Salute rally and granted them access to set up on Thursday and roll out the event on Aug. 20.

Jim Wear, president of ProPromotions, said,  “We’re just plowing ahead per our instructions from council. We have not had any further contact with Farmers Market. After that last city council meeting, the message that we received from council was, move forward. ”

The city of Cripple Creek has long been a supporter of, and home to, the Salute to American Veterans Rally. In 2020, the event was canceled due to the COVID-19 pandemic. And the city council during their budget discussions in late 2020 decided not to sponsor any special events for 2021, except for their July 4th celebration. As a result, no funds were awarded to the Salute rally for this year. Wear and the Cripple Creek City Council had several talks about keeping the event still in Cripple Creek, but they were unable to reach a satisfactory solution. Wear then decided to seek an alternate location for the event.

Keeping the event in Teller county was the primary goal, according to Wear. and so, negotiations began with Woodland Park.

The new venue for the rally, though, has created some confusion.

Cripple Creek Marketing and Events Director Jeff Mosher told TMJ News in an email, “There will NOT be any activities during the Salute to the American Veterans Rally on Aug 19-22.  Pro Promotions decided to host all activities in Woodland Park.  However, the ride from Woodland Park to Cripple Creek is still being planned on the 21st.  We will have the large American flag (supplied by Pro Promotions) hanging over Bennett Ave at the fire station, but the ride will just be passing through town around 11 a.m. before returning to Woodland.”

According to Mosher, the city is still receiving many calls  from people, still thinking the event is going to be in Cripple Creek.

The entire controversy over the Salute rally has created a big war on social media for months waged between proponents and critics of the event.

But the city of Cripple Creek, in an official statement, has made it clear they still support the rally, but just couldn’t fund the event in 2021. They did leave the door open for funding in future years.

According to sources, some civic leaders are unhappy that Wear moved the event out of Cripple Creek, as they contend the city has never taken the position that no special events, including the Salute rally, can occur this year.  Leaders have  said  they didn’t want to be in the position of picking winners and losers for special event funding this year, with big budget cuts looming. The city government had to cut its spending budget by close to 30 percent for 2021, compared to the previous year.

Plus, at the (2021) budget approval time at the close of 2020, concerns still circulated about the pandemic.

There are still questions regarding the  future of the rally, and whether it will return to Cripple Creek in future years, or continue indefinitely in Woodland Park.