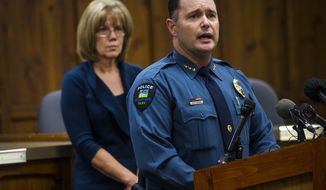 Former Police Chief Tells His Side of the Story

New information has been released regarding the reasons for the suspension of  former Woodland Park Police Chief Miles DeYoung, which led to his early retirement.

The chief furnished a retirement letter when City manager Michael Lawson called him in for a meeting to discuss the finding of the third party investigation of alleged workplace misconduct. The third party consulting firm found several cases of gender bias and harassment and intimidation, and recommended that DeYoung be terminated.

According to the report, the investigation came about after the city’s human resources department filed several complaints against DeYoung regarding incidences of discrimination, sexual harassment, favoritism, and retaliation/intimidation.

During the investigation, the consulting firm interviewed 10 members of the Woodland Park Police Department including all of the command staff, the complainants, named witness officers and the dispatch supervisor. They also interviewed a former WPPD police sergeant.

The report cited three policies that they found there was a preponderance of evidence that DeYoung violated including two that had to do with workplace violence. The final report gave several specific examples of DeYoung’s behavior towards his officers specifically his female staff.

For one, the report concluded that there has been a clear pattern of DeYoung “targeting” the work performance of a female code enforcement officer. The officer said that the commanders told her not to worry about completing certain cases reports and to focus on her criminal cases.

However, the officer said that she would be lectured at length in an aggressive and critical manner by DeYoung for not finishing reports. She brought to attention the fact that there have been 53 cases not turned in by male officers and nine not turned in by female officer, but the women were reprimanded when the men were not.

Another part of the report indicated that DeYoung would intentionally intimidate his employees, retaliate against them and hold grudges.

The report indicated that the chief would constantly walk by the report writing area, and if there were too many officers writing reports, he would say “now would be a good time to commit a crime” since the officers weren’t out in the streets. The report said that many officers would then wait until the chief left to rush to finish their reports before their shifts ended which added stress to the officers.

Employees of the department that were interviewed said that DeYoung would constantly brag about his time in the military and how he was trained in psychological warfare.

The former sergeant interviewed also said that it was common for the chief to retaliate against an employee he was holding a grudge against by not approving training requests, shift assignments or days off. The report found that the majority of these types of instances affected female officers more than their male co-workers.

“The Woodland Park Police Department currently has an extremely toxic environment,” the report said in the recommendations section. “Chief De Young has done nothing to change the environment. In fact, he has perpetuated the situation which has led to the current crisis. The state of this police department is dire and can only improve with the termination of Chief De Young. By doing so, the department will be able to heal and operate in a cohesive, safe and respectful manner.”

The day after the chief retired, DeYoung sent a lengthy letter of rebuttal in an e-mail to the city manager. In the letter, the chief said that he felt the investigation done by JEH was incomplete. According to DeYoung, he was never interviewed by the firm so that they could hear his side of the story.

In his e-mail, DeYoung drafted a list of other officers that should have been interviewed. “This lack of objectivity and even-handedness in the investigation indicates to me-as a law enforcement officer with decades of experience-that this investigation is not only incomplete, biased and unfair, but is in actual fact retaliatory,” the former police chief said.

In the letter, DeYoung broke down all of the claims and painted most of them to be false. He said that he was going to promote one of the officers but the complaint against him came in faster than the scheduled promotion ,so he put the promotion on hold with permission from the former city manager.

DeYoung also stated that one of the sergeants had a “blueprint” of filing complaints against the chief.  DeYoung said that a former sergeant, who was interviewed, was retaliating against him because DeYoung disciplined the sergeant for moonlighting with a private security firm.

The report contained some information related to misconduct by the commanders.

Commanders Ryan Holzwarth and Andy Liebbrand have been suspended since early June due to a criminal investigation. There still has been no more information released about the investigation.

For the most part, Woodland Park City Manager Michael Lawson  has remained mum about these inquires, indicting he can’t comment on an ongoing investigation. He has released press releases, but hasn’t provided much new information. But in a television interview last week, aired on KRDO, pertaining to another investigation, Lawson said that if policies need to be changed or adjusted as the police department, the city would take that direction.