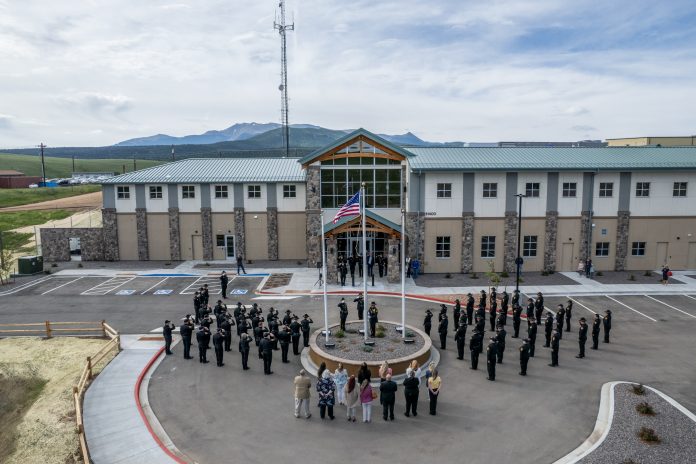 The doors to the Teller County Sheriff’s new $7 million-plus headquarters, a project labeled by many locals as the  “Taj Mahal” of Divide, have opened officially after months of construction and preparation.

Although the grand opening of the new sheriff headquarters was delayed a bit, according to county officials, elected leaders and Teller staffers say the project went smoothly

More importantly, they tout the fact that the massive expansion didn’t involve any tax increases or extra spending.

The funds to build the new sheriff’s office were achieved by efforts of past county commissioners to put money aside for the project for a number of years.  Even though the new building is in the same spot as the old facility, the new complex is completely different and quite a bit bigger than the old headquarters. In fact, it represents a building that is nearly four-times the size of the former facility. 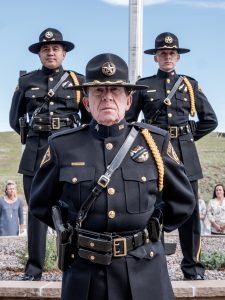 Last Monday, the sheriff’s office held an open house ceremony in which members of the public were invited. The event started off with short speeches from the sheriff and the county commissioners.

After the speeches, people were invited to walk around the sheriff’s office and check out the new headquarters. Each section had members of the sheriff’s command staff that explained what each room would be used for. 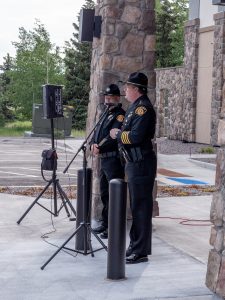 “This sheriff’s office was a 6,000-square-foot building that was built as a fire station,” Teller County Sheriff Jason Mikesell said. “So, we had our 85 personnel working out of two small rooms for several years. This building has been dedicated as the Gary Shoemaker Building. Sheriff Shoemaker was the longest elected sheriff in the county.”

Shoemaker was chosen because he ran the sheriff’s office between 1974 and 1994. Mikesell said that he wanted to mix the past with the present, so the new and improved building was named after the most famous sheriff of the past.

The new building is quite larger than the deputies’ old home, as it is over 22,000 square feet. The new facility also contains amenities for the sheriff’s deputies that the old building just didn’t have room for. 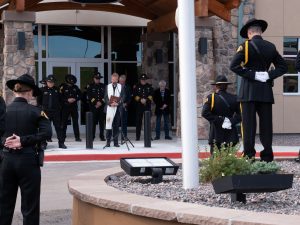 The old facility opened for business in the mid-1980s, creating much overcrowding in recent years. In earlier years, the department worked out of much smaller offices in Woodland Park and Cripple Creek.

A standout feature of the new building is a spacious lobby area. Before the sheriff’s lobby was a small room that didn’t have any sort of waiting area. Now people have a large room to wait in, while they are conducting business at the sheriff’s office. 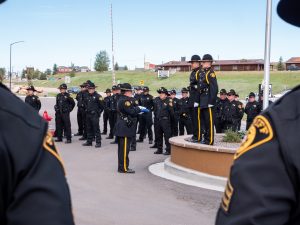 The detectives’ area of the building is also new and improved. Connected to the detectives’ offices is a big evidence storage room with two levels. The evidence area also has a garage with a bay door where they can secure vehicles for evidence processing.

There are also now two interview rooms connected to the detectives’ office. And, there is an outside door so the detectives can bring those they are interviewing directly in from the outside parking lot.

The sheriff also mentioned how the dispatch area also needed to grow. The one room the dispatchers had before was not big enough to grow to handle the 60,000-plus phone calls the sheriff’s office receives every year.

Now the dispatch room has several seven monitor computer setups, so more than just one or two dispatchers can work at once. Plus, the dispatch room sports an additional section that can be used to facilitate growth in the future.

The patrol area has also grown significantly. The patrol section of the building now has individual offices for all of the supervisory staff. In addition, the patrol deputies have a large new room with cubicles and computer screens.

According to Teller County Sheriff Public Information Officer Lieutenant Wes Walter, the patrol area now has 30 cubicles with computers. This is enough for each officer to have their own space during each shift, noted the lieutenant. “The best part is that they will now all have their own computers to use,” Walter said. “Before, the deputies would sometimes have to wait in line to use one of the handful of computers we had.”

During the open house, several community members showed up to welcome the deputies into their new home. By mid-week, the sheriff’s office was fully open and operating in their new elaborate home, regarded by many locals as the “Taj Mahal” of Divide.