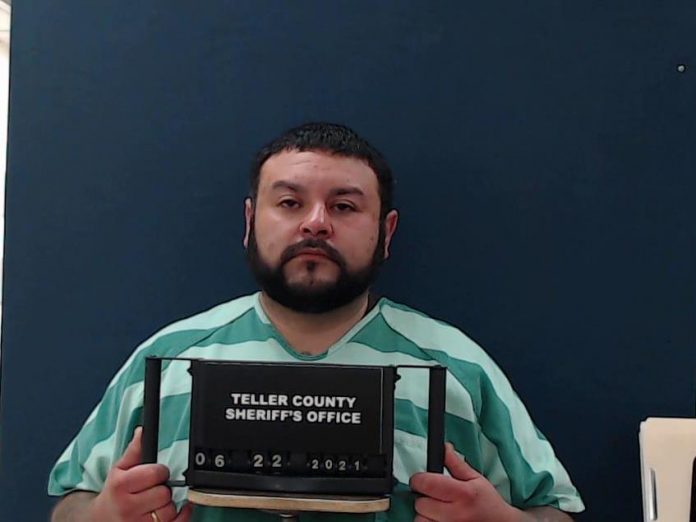 Now that summer time is here, strange crimes have once again started to pick back up in Teller County.

After a few months lull of no major law enforcement events in the news, the Teller County Sheriff’s department and other local law enforcement agencies are back in action, arresting criminals accused of serious crimes.

Early last week, after a chase and a fight, the sheriff’s deputies arrested Robert Anthony Leon on a slew of charges. According to information released by the Teller Sheriff’s Office and the Colorado Springs Police Department, Leon’s crime spree started in Colorado Springs on June 21 at the intersection of 21st and Bott.

A woman was driving down the street when the suspect (a pedestrian) picked up a heavy object and threw it at the car hitting it. The victim and passengers in her car then got out of the vehicle to confront the man. After everyone exited the vehicle, the suspect jumped into the driver’s seat and stole the black sedan.

The victim notified police and they put out an alert to search for the vehicle. A CSPD officer then located the car driving through the Cimarron and Nevada intersection. The officer tried to pull the car over, but it sped off and led the police on a chase.

Then, at around 11:30 p.m., a Teller County Sheriff’s deputy was on his routine patrol when he saw a vehicle who was driving in front of him commit a strange act. “He made a big loop in an open intersection and rammed the deputy from the rear,” Lieutenant Wes Walter with the Teller County Sheriff’s office said. “Since the deputy’s vehicle has a bunch of censors it shut our vehicle completely down. Then the suspect was able to limp his car away.”

Woodland Park Police then joined the effort and went out to search for the vehicle. After a short search police found the sedan abandoned in a trailer park parking lot near downtown Woodland Park. They were then able to confirm that is was the same vehicle that was stolen from Colorado Springs.

After searching the area, authorities were able to locate Leon, standing on top of a trailer’s roof. When the deputies tried to pursue the suspect, he then jumped off the roof and into another car.

According to Walter, it seemed as if the suspect had the vehicle staged in the trailer park. Walter said that the car was not in the data base as being stolen and that it had out of state license plates.

Once Leon sped away from the trailer park, all local law enforcement agencies began pursuit of the suspect’s new vehicle. The suspect started heading east on Highway 24 back towards Colorado Springs when the deputies (with help from the Colorado State Patrol and WPPD) boxed in the car and forced it to stop.

However, unfortunately the struggle didn’t end there. When the officers tried to arrest Leon, a physical fight ensued inside his car. During the scuffle, the deputies recovered a firearm under the suspect’s legs which authorities later found out was stolen.

The deputies eventually got Leon into custody and he and a few officers received minor injuries that paramedics were able to treat on the scene. The officer whose vehicle got rammed was taken to a local hospital and was treated and released with minimal injuries.

Leon was then taken to the Teller County Jail where he still sits on a $250,000 bond. Leon was charged with a total of nine felony charges including three counts of second degree assault, possession of a weapon by a previous offender, two counts of possession of a controlled substance, vehicular eluding, and two counts of criminal mischief. Leon was also charged with six misdemeanors including driving under the influence, resisting arrest, and obstructing a peace officer.