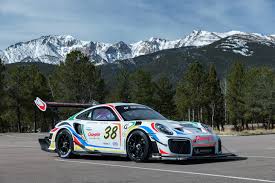 The 99th running of the Pikes Peak International Hill Climb ended last  Sunday, with no major accidents or incidents.

Unlike in 2020, this year fans were welcomed back on the 14,000 foot mountain to witness more than 50 competitors racing up the 150-plus turn course

However, due to Mother Nature, the 2021 race didn’t proceed quite as planned.  The first major race hurdle struck when the internationally renowned event was postponed about one hour from the starting time. Secondly, the finish line was moved down to an area near the “16 mile” point, just below Devil’s Playground due to inclement weather conditions.

The shortening of the race changed the outcome of the contest by reducing the cars’ finishing times by about two minutes on the average. Besides the mentioned setbacks, the famous local pastime went rather well.

Although a bit on the chilly side, there were no major weather events that stopped the race at any time. No racers were injured and the event moved rather quickly as the last checkered flag flew just before 1 p.m.

Woodland Park resident and former Pikes Peak motorcycle champ Codie Vahsholtz, was marked as a rookie in 2021 as this was the first time, he raced up the giant mountain on four wheels. His racecar debut ended well, but perhaps not as good as he hoped.

Vahsholtz made it to the closer finish line in 6 minutes and 45 seconds, but did not come out on top in his class. He took second in the open wheel division and he was the sixth fastest competitor up the shortened course. Even though he didn’t take home any first place trophies, out of the 11 rookie racers, Vahsholtz had the best first race among first-timers by nearly 15 seconds.

The Woodland Park racer was defeated in the open wheel division by hill climb veteran Paul Dallenbach. Dallenbach raced to Devil’s Playground in a time of 10 seconds faster than the second place finisher with a time of 6:35.663. The well-known driver from Basalt ended up racking up the third fastest speed of the day.

The “King of the Mountain” of 2021 ended up being Robin Shute from the UK in a 2018 Wolf GB08 TSC-LT. He was the only one to traverse the course in less than six minutes, as he passed the finish line in 5 minutes, 55 seconds.

Romain Dumas hailing from Switzerland was second best, but he was over 30 seconds away from Shute with a time of nearly six minutes and 32 seconds. Dumas was representing France in the race and was speeding up the hill climb in his 2019 Porsche 911 GT2RS Clubsport.

This was the first year second generation champion Clint Vahsholtz did not race up the mountain in nearly 30 years. After winning the “King of the Mountain” title last year, he decided to take a year off and give his son Codie a chance at the competition in the Vahsholtz Racing open wheeler that he dominated in last year.

Clint has said that he plans on exploring opportunities to return to America’s Mountain in 2022. Next year, plan on seeing two Vahsholtz competitors on the fourteener and witnessing them both rack up times that are in the lower half of the top ten fastest challengers.